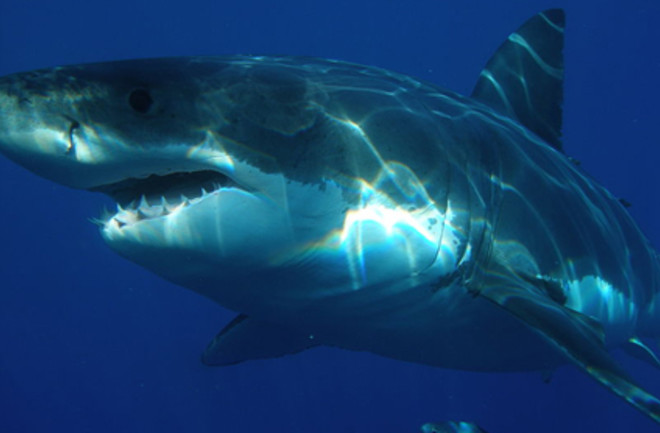 The movie was called Jaws for a reason. The great white shark's powerful chompers make it a feared marine killing machine. However, researchers have found, it takes a while to grow into that ferociousness—adolescent great whites don't yet have strong enough jaws to complete an attack on tougher prey without harming themselves, and it takes until adulthood for that jaw strength to develop. The study by Toni Ferrara and colleagues, forthcoming in the Journal of Biomechanics, used the scanning technique called computerised tomography (CT) to take a look at the great white's developing jaw, and compare it to a relative: the sand tiger shark (also called the grey nurse shark).

With these scans, they were able to create digital three-dimensional models of the sharks' heads. The models revealed that the great white's jaws are reinforced by layers of tough "mineralised cartilage", which take years form. So until the sharks grow to approximately 3m [10 feet] long, they are unable to gouge chunks out of larger, tougher prey, such as sea mammals. [BBC News]

will sometimes take an exploratory bite, but then abandon an attack:

[Adolescent] great whites, just under the age of 10, also cannot risk losing too many teeth. "So at this juvenile stage the animal is testing itself, trying to learn what it can and cannot do," [co-author Stephen Wroe] said. "Sensors in the jaws give feedback, but we do not know precisely why any individual shark makes a decision on whether to go through with a kill or whether to decide that discretion may be the better part of valor."

Nevertheless, even the teenage great white shark in the study generated over 661 pounds of biting force. [Discovery News]

Great whites can generate all that power thanks to the setup of their jaws:

The scientists found the sharks' muscles are separated into upper and lower parts by a tendon, which pulls the muscles so that they are perpendicular in relation to where they attach to the jaws and where they meet that pulling tendon. Think about pushing a refrigerator across the floor, Ferrara said. You'd get the most bang for your muscle strength if you held your arms perpendicular to the fridge rather than at some other angle. [LiveScience]

By contrast, in the sand tiger sharks that Ferrara's team studied, the muscles pulled at an angle rather than in a perpendicular fashion. It means that they require a little longer than the great whites to open their mouths wide, but then their jaws can spring shut like a trap. Each setup, then, is attuned to the particular shark's eating habit. Sand tiger sharks, which target smaller, faster prey, need jaw speed. Great whites, which prey on larger sea mammals, need jaw power. Related Content: Not Exactly Rocket Science: Prehistoric Great White Shark Had Strongest Bite in History

80beats: The Secret Lives and Loves of Great White Sharks

80beats: How Great White Sharks Accidentally Wandered Into the Mediterranean