You can thank wasps for your bread, beer and wine 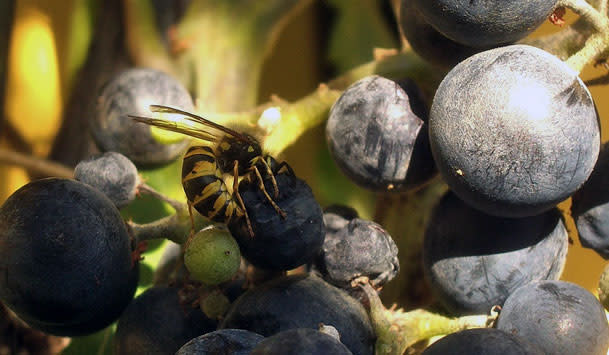 If wasps didn’t exist, picnics would be a lot more fun. But the next time you find yourself trying to dodge a flying, jam-seeking harpoon, think about this: without wasps, many of your ingredients might not exist at all. Irene Stefanini and Leonardo Dapporto from the University of Florence have found that the guts of wasps provide a safe winter refuge for yeast – specifically Saccharomyces cerevisiae, the fungus we use to make wine, beer and bread. And without those, picnics would be a lot less fun. S.cerevisiase has been our companion for at least 9,000 years, not just as a tool of baking and brewing, but as a doyen of modern genetics. It has helped us to make tremendous scientific progress and drink ourselves into stupors, possibly at the same time. But despite its significance, we know very little about where the yeast came from, or how it lives in the wild. The wild strains do grow on grapes and berries, but only found on ripe fruits rather than pristine ones. And they’re usually only found in warm summery conditions. So, where do they go in the intervening months, and how do they move around? They certainly can’t go airborne, so something must be carrying them. Stefanini and Dapporto thought that wasps were good candidates. They’re active through the summer, when they often eat grapes. Fertilised females hibernate through the winter and start fresh colonies in the spring, feeding their new larvae with regurgitated food. In the digestive tracts of wasps, yeasts could get a ride from grape to grape, from one wasp generation to the next, and from autumn to spring. To test this idea, the duo captured European hornets, paper wasps and honeybees in spring, summer and autumn, from sites all over the Italian countryside. They found several species of yeast in the wasps’ guts (but not the bees), including 17 strains of S.cerevisiae. They were very diverse: most were related to wine strains, but others were close kin to bread strains, and one belonged to a group used in African beers, palm wine, and laboratory work. And most importantly, they lived in the wasps in all three seasons. What about winter? Stefanini and Dapporto collected females before their hibernation and fed them with a strain of S.cerevisiae that glows green in the dark. They then allowed the wasps to hibernate. Three months later, most of them still had viable yeast cells in their guts, and those that founded new nests produced larvae that also bore the glowing fungi. They had inoculated the next generation with a dose of yeast, ready to be passed on to another batch of fresh fruit. The duo writes, “Wasps can maintain a potentially unending transmission of yeast strains.” Justin Fay, a yeast researcher from Washington University, says that it’s about time we found out more about the natural history of S.cerevisiae. After all, it is one of the most intensely studied of all living things. Its genome was the first completely sequenced one outside of the bacterial world, and the one whose genes have been most thoroughly characterised. “There is substantial interest in using the power of yeast genetics to understand evolution, but to do so, we must have at least some basic idea of its natural history, where it lives, how it gets around, and so on,” he says. Jose Sampaio, another yeast specialist whose work I’ve covered before, adds, “The natural history of Saccharomyces yeasts are poorly known, which is just embarrassing when you think of their immense importance.” It’s possible that other animals could act as hosts for S.cerevisiae, and Stefanini and Dapporto acknowledge as much. However, they think that the list of candidates is short. The yeast has been found in the genitals of birds, although they only last there for half a day. It has been found in other insects, but these are usually too short-lived to sustain the fungus from year to year. Social wasps, like those that plague our picnics, are special in that they hibernate (providing a refuge) and feed their young (providing a continuous source of fresh carriers). However, Sampaio thinks that the bark of oak trees is the true natural habitat for S.cerevisiae. He has isolated the fungus from oaks all year round and in three quarters of his samples. By contrast, Stefanini and Dapporto only found it in a quarter of their insects. “For our conceptual framework, wasps are not needed as habitats although, they’re very interesting as vectors,” he says. After all, they may live in trees, but they still need a lift. Reference: Stefanini, Dapporto, Legras, Calabretta, Di Paola, De Filippo, Viola, Capretti, Polsinelli, Turillazzi & Cavalieri. 2012. Role of social wasps in Saccharomyces cerevisiae ecology and evolution. PNAS http://dx.doi.org/10.1073/pnas.1208362109Image by BarockschlossMore on yeast: