Green beards, flocs of yeast and the evolution of cooperation

When we think about cooperative behaviour, most of us would think of animals like ants, meerkats, lions or, indeed, humans. But don't rule out yeast. The small, single-celled fungus has provided us with much of our knowledge of genetics and molecular biology and now, it's shedding light on the evolution of cooperation too. 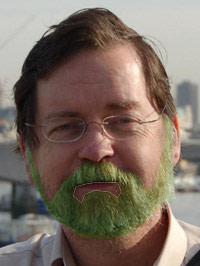 The budding yeast, Saccharomyces cerevisiae, is one of the most widely studied of laboratory microbes, but scientists mostly know it as a solitary species. Brewers, on the other hand, use S.cerevisiae to make beer and are all too aware of its social side. Their strains have a tendency to form large clumps, or "flocs", which makes them easier to remove from beer once fermentation is complete. This clumping process - flocculation - has been mostly ignored by scientists because lab strains don't do it.

Enter Scott Smukalla from Harvard University. His group found that flocculation is a great example of cooperative behaviour, for clumped cells find strength in numbers and shield each other from environmental threats. The entire process is controlled by a single and very special gene called FLO1. Switch it on, and yeast cells favour both communities and cliques - they gain the ability to stick to other cells but only associate with those that also have active FLO1.

Flo1 is what Richard Dawkins called a "green beard gene" - a gene whose bearers prefer to cooperate with carriers of the same gene. Dawkins, skilled with imagery as he is with controversy, imagined one such gene that gave individuals a green beard and favouritism for those with a green beard. It was a powerful illustration of a concept proposed by legendary biologist William Hamilton a decade earlier.

Hamilton was trying to explain why groups of cooperating individuals aren't torn apart and taken over by cheats, who reap communal benefits while contributing nothing. It's a problem that has occupied the thoughts of evolutionary biologists ever since Darwin. Hamilton proposed the idea of green beard genes as a possible answer to the dilemma, but he also felt that they would be extremely rare, for one gene would have to do many different things. He may or may not be right, but such genes do exist and FLO1 is one of them.

Smukalla's team discovered the gene by studying a wild strain of yeast, whose descendants are used in laboratories worldwide. Some colonies flocculate very strongly, others weakly; but their degree of camaraderie corresponded with the activation of a single gene - FLO1. Indeed, when the group switched on the dormant FLO1 gene in a usually solitary lab yeast, it too formed large, densely-packed flocs (compare tube on the right to tube on the left).

These close-knit groups protected the yeast cells from chemical attacks. Smukalla put the different strains through the wringer, subjecting them to freezing and thawing, heat, alcohol and antifungal drugs. All the cells fared equally badly at extreme temperatures, but those in flocs tolerated about twice as much alcohol and over 100 times more antifungal drugs than their more isolated peers.

But it's not all good news for the huddled cells - their fellowship comes at a cost. Huddled within a thick mass of peers, the cells at the centre are shielded from nutrients and oxygen as well as danger. As a result, flocculating strains grow about at a quarter of the pace of those that stick to themselves. And even if the strains are prevented from clumping together, the mere fact that some of them had activated FLO1 meant that they grew more slowly.

The price attached to active FLO1 explains why not all wild strains switch it on, but it also raises the question of why flocs aren't invaded by cheater strains, which gain safety in numbers without having to pay the penalties of FLO1 themselves. The answer is that, for the most part, such strains aren't allowed in.

Smukalla mixed cells with and without active FLO1 in equal measure and left them to mingle for many hours. On his return, he found that the cells with active FLO1 had almost entirely congregated in flocs. Clearly, they prefer to be in each other's company. Some cheating FLO1-less cells managed to find their way within the floc, which isn't surprising given that they soon outnumber their peers with their speedier growth. But even so, the FLO1 cells have such an affinity for each other that they push many of the cheaters into the outer layer of the floc, where they ironically end up as the first line of defence for the rest of the community.

As a final test, Smukalla transferred the FLO1 gene to another closely related species of yeast, Saccharomyces paradoxus, which has no version of its own and does not flocculate. Amazingly, the addition of this single gene gave this yeast the ability to form flocs and when the two species were jumbled, they formed mixed-race flocs.

It's a truly powerful set of results. Together, they prove that FLO1 and FLO1 alone produces cooperative behaviour and allows individuals to recognise others with a similar supportive streak. We couldn't have wished for a better example of Hamilton's elusive green beard gene.

The way it works is simple. FLO1 creates a protein that sits on the surface of an individual yeast and sticks to sugary molecules on the surface of other cells. If both cells have FLO1, the bonds they form are twice as strong. Smukalla even suggests that subtly different versions of FLO1 could allow natural yeast populations to discriminate among one another - there may be many colours of beard out there.

FLO1 is also a prime example of the selfish gene idea so widely popularised by Richard Dawkins. By causing a favouritism for other FLO1 carriers, the gene increases its own frequency over time, regardless of what the other genes in the yeast's portfolio have to say about it. FLO1 also quashes a common misconception about the selfish gene concept - that such genes inevitably lead to selfish organisms. In this case, cooperation at a large scale is borne of selfishness at a small one.