You Can Dance if You Want to, You Can Learn from Different Bees 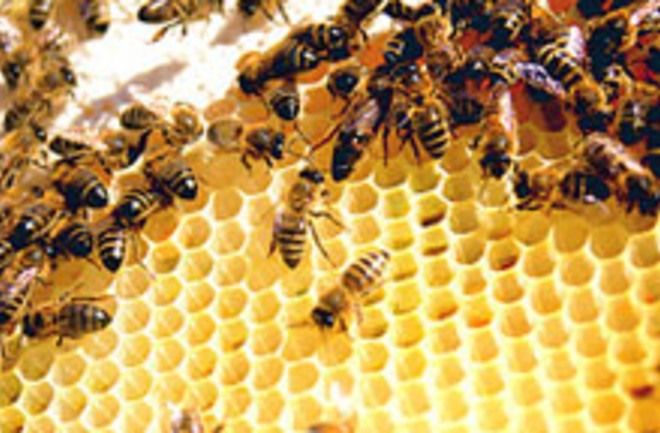 For more than 40 years, scientists have known that honeybees communicate with one another through the language of dance. One bee flies around in loops and wags its rear end in patterns that can tell other members of the hive where to find food. Honeybees in different parts of the world perform the dance a little differently, according to a team of Australian, German, and Chinese researchers. And now the scientists say they've discovered that bees can even learn the dance language of their cousins from another continent. The researchers carefully examined an Asian species and a European species of honeybee separately to determine that they used different "dialects" of the dance—in other words, they sent the same messages with slightly different dance moves. Then the scientists placed the two groups together for as long as 50 days, and after only a few tries, the European and Asian bees learned to communicate. The first time Asian worker bees watched a European bee dance, they didn't fly far enough toward the food because the two species communicate distance differently. But the second time, researchers say, most Asian workers had learned the European bee language and found the food source right away. Still, although the bees bridged the communication gap, that doesn't mean they like each other. In colonies researchers created that were headed by a queen from the European species, the European workers wiped out their Asian rivals in the first two or three days. But in colonies that were headed by a queen from the Asian species, which is where researchers made their communication find, the bees from both sides managed to live in harmony. The researchers say this is the first time a mixed-species honeybee colony has been successful. Bee warfare aside, it's a cool find. The honeybee dance, the researchers say, is the only known form of symbolic communication between invertebrates, and now it looks like the bees can adjust their dance interpretation on the fly. If only we could learn foreign languages so easily.