Yes, Some Greenland Sharks Are Old, but 400 Years Old?! 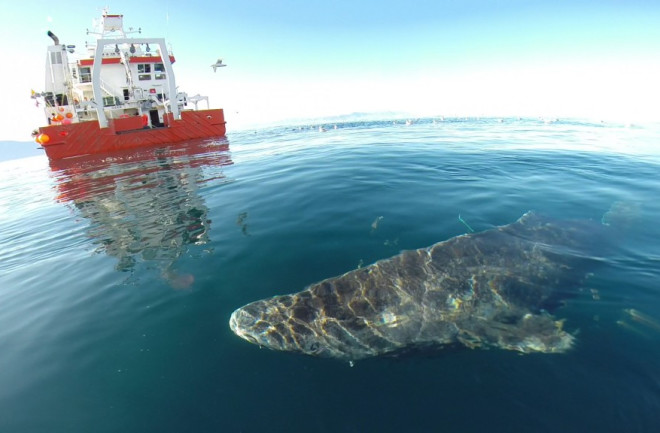 A Greenland shark swims near the surface after its release near a research vessel. (Credit: Julius Nielsen) Never ask a female her age — unless, of course, she’s a 16-foot-long Greenland shark and it’s for science. The shark species was shown to have remarkable longevity, living up to 400 years and reaching sexual maturity around 150 years, according to a paper published Thursday in Science. The researchers estimated the ages of 28 female Greenland sharks by radiocarbon dating proteins in their eye lenses and relying on the bomb pulse — a spike in radioactivity released globally by nuclear weapons in the 1950s and 60s. The estimates would make Greenland sharks among the longest-living animals, only out-aged by sedentary invertebrates like Ming the 507-year-old clam. Other scientists doubt the exact ages reported in the study, but agree that the sharks could be centenarians, which has important implications for conservation. “I have very little faith in the number they come up with … but it shouldn’t overshadow the overall message,” says Simon Thorrold, a marine biologist at Woods Hole Oceanographic Institution, who was not involved in the study. “Greenland sharks probably are very old and we need to know that, in terms of coming up with ways of conserving and sustainably managing any sort of human impact on them,” he says.

Natives of the chilly North Atlantic, Greenland sharks were known to grow large and slow. Adults reach lengths of 12 to 15 feet, adding less than 1 centimeter per year, with females outgrowing males. The pattern of slow growth and large size implies the sharks have long lives, but no one had directly measured their ages before.

A Greenland shark swimming after being released. (Credit: Julius Nielsen) The researchers, led by marine biologists at University of Copenhagen, acquired sharks that were accidentally caught and fatally wounded by scientific surveys between 2010 and 2013. To estimate the sharks’ ages, the team used several unconventional methods of radiocarbon dating, which resulted in large uncertainties. For instance, the largest shark, at just over 16 feet, was estimated to be 392 years old with 120 years of uncertainty in either direction; it could have been as young as 272 or as old as 512 years. The age of 400 is around the middle of its possible birthdates. “People are so focused on the 400 years,” says Julius Nielsen, lead author of the study and doctoral student at University of Copenhagen. “My job is to remain with my feet on the ground,” and reiterate that the 400 years is, “almost and most likely, but there is some uncertainty.” Still, Thorrold says, the study authors “are much, much more bold than I would be with the same data set.”

Dating Is Hard, Under the Sea

Land animals incorporate radiocarbon or Carbon-14 into their bodies from the atmosphere. When they die, this heavy carbon naturally transforms into nitrogen at a known rate. By measuring the amount of remaining radiocarbon, scientists can calculate the number of years since an animal lived. But radiocarbon dating gets “really difficult as soon as you get into the ocean,” says Nielsen. Fresh radiocarbon from the atmosphere mixes with older carbon in the oceans, depending on depth and geographic location. “Since the sharks are moving around … the samples could potentially originate from anywhere in the North Atlantic,” says Nielsen. “If we knew exactly which water mass our carbon came from we could have been much more precise in our age estimates.” The researchers used the sharks’ eye lenses — an unusual tissue for radiocarbon dating — because proteins at the center are thought to form prenatally and remain unchanged during life. These molecules should hold the radiocarbon the sharks were born with, rather than radiocarbon they took on throughout their lives.

A Greenland shark swims up to Julius Nielsen's research raft. (Credit: Julius Nielsen/juniel85/Instagram) “The secret behind the success,” was that the study had, “not only a lot of animals, but in various sizes and ages,” says Nielsen. The two smallest sharks were clearly born within the past 60 years because they had extremely high radiocarbon values, resulting from material released from nuclear weapons starting in the late 1950s: the so-called bomb pulse. The other 26 larger sharks were definitely older than the bomb pulse, but how much older is unclear. The possible birthdates range from 1460 to 1960, meaning radiocarbon dates alone can only say the sharks were between 556 and 56 years old. “You’re interpreting very subtle variations in the radiocarbon in the ocean … to get at those older dates, and it’s really impossible to do that,” says Thorrold. “They start just adding assumptions that I think are very difficult to justify.” To narrow the estimates, the researchers assumed that shark length relates to age in a predictable way. When the original estimates are constrained by this rule, the result is shorter age ranges. But the more precise dates are only accurate if the assumed relation between length and age is correct. And according to Thorrold, “we know that size is not a particularly good predictor of age.”

The Important Thing Is They Are Old

“I wouldn’t want the first order message to get lost in the details of whether it’s 100 years or 400 years … in terms of the conservation questions it doesn’t necessarily matter that much,” says Thorrold. Knowing that Greenland sharks are long-lived and slow reproducers means they need to be treated less like cod and more like whales; that is, less like fishes and more like marine mammals. Despite uncertainties of the exact dates, the study adds valuable data to a mysterious species. Nielsen was inspired to study Greenland sharks when a research vessel he was working on caught one several years ago. “I wanted to know what was known about that super impressive animal,” he says. And it “was striking how little was actually known.” The dating study is one part of his doctoral dissertation, which will also use satellite tracking and genetics to better understand the ecology of the Greenland sharks.