Yes, Other Animals Do Have Sex For Fun

Think about it: If animals possess an instinct to reproduce, it needs to function somehow — and pleasure is a fairly basic motivator. 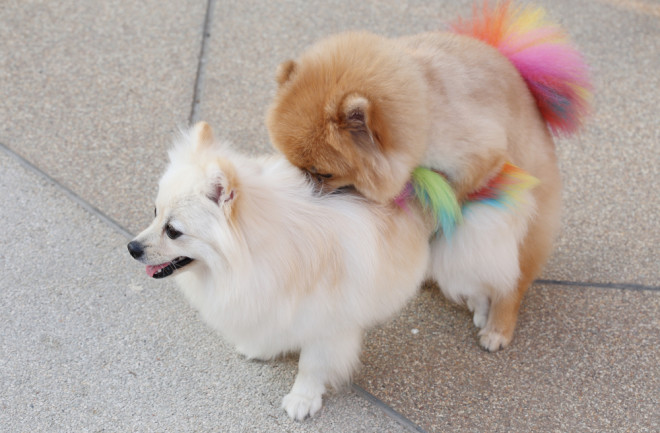 There’s an idea circulating that humans are the only animal to experience sexual pleasure; that we approach sex in a way that is distinct from others. As with many questions about sex, this exposes some interesting facts about the way we discuss the subject.

On one level, the question of whether humans and nonhumans experience sex in the same way is fairly simply dismissed: how would we know? We cannot know how a nonhuman experiences anything — they can’t be asked. Sex as an experiential phenomenon for nonhumans is, quite simply, inaccessible. Science is obliged to propose questions that are answerable, and “how does a leopard slug experience sex?” is, at time of writing, about as unanswerable as they get.

Having said that, we can make educated guesses about whether sex is pleasurable for other species. Sex would be a very strange thing to seek if it didn’t bring some form of pleasure. It increases risk of disease, it wastes energy, it can seriously increase the likelihood of something bigger coming along and eating you (seriously, check out leopard-slug reproduction, below).

There’s no reason why an animal should seek sex unless they enjoy it. It is often proposed that an inherent “drive to reproduce” explains nonhuman sexual activity, but that is not an alternative here: if animals possess an instinct to reproduce, it needs to function somehow — and pleasure is a fairly basic motivator. The hypothesis that all sexually reproducing species experience sexual pleasure is, in itself, quite reasonable — as would be the hypothesis that animals find eating pleasurable.

Do Monkeys Have Orgasms?

This hypothesis about sex has been tested. Since the word “pleasure” is quite vague, scientists have tended to focus on orgasms. As a particularly intense form of sexual pleasure for many people, the logic has been that if non-humans experience orgasm, they are almost certainly experiencing pleasure.

Given that we are most familiar with human orgasms, scientists have unsurprisingly looked for behavioral and physical correlates of what we sometimes experience — shuddering, muscular rigidity, a cessation of movement, vocalization, changes of facial expression, ejaculation. None of these are guaranteed, and consequently we should not expect them necessarily to be associated with sex in other species. But using this method, most commonly to study non-human primates, the animals perhaps most likely to display responses similar to humans, scientists have detected orgasm in many different species including macaques, orangutans, gorillas and chimpanzees.

In fact, very few primatologists doubt that non-human primates experience orgasm — at least, male non-human primates. There is debate as to whether female primates (including humans) experience sexual pleasure in the same way male primates do, which raises some fairly important questions about how Western culture views female sexual agency. But some detailed studies of the stump-tailed macaque have suggested that females of this species, at least, demonstrate a capacity for orgasm.

Drilling down the totality of the “experience of sexual pleasure” to the moment of orgasm is problematic, though. It is the result of the pioneering work of Masters and Johnson dating from 1966. They focused sexual pleasure on orgasm by proposing a four-stage biomedical framework of excitement, plateau, orgasm and resolution. Despite much criticism, it entered intellectual and public consciousnesses as a description of “normal” sex, involving genitals and aimed at producing orgasms.

But while this may describe sex for many, it excludes an awful lot of people. A brief survey of the various things that humans get up to quickly indicates that sex isn’t necessarily focused on orgasm or genitals. Focusing sex on genitals and orgasm only makes sense if we assume that the central function of sex is reproduction — exactly the same assumption that seems to lie behind scientific inquiries into sexual pleasure in other species.

Various cultures maintain that sex is not connected to conception, though — most famously the Trobriand Islanders of the South Pacific. New reproductive technologies have meanwhile separated sex and reproduction: It is not necessary for a people to have sex in order to conceive. This shouldn’t come as much of a surprise, given that people have more sex than they have children. The yoking of sex to reproduction to the exclusion of pleasure can be traced to the Victorian era, and is the consequence of all sorts of exciting historico-political processes that would take a whole separate article to explain, but it seeped into all aspects of Western culture, including science.

Not Just for Reproduction

Not to suggest that sex isn’t involved in reproduction. The gamete exchange that is necessary for conception to occur is, in general, the result of some form of contact between bodies. But when people say that “humans are the only species to have sex for pleasure” they are really saying that “humans are the only species that has non-reproductive sex.”

In fact, sex may well serve a number of other functions. Sex may bond animals together or may cement a dominance hierarchy in the case of bonobos, for example, one of humans’ closest relatives. These functions may be extremely important, especially for social animals, and would likely only be feasible if sex were in itself a source of pleasure.

There is also no shortage of examples where non-human sex has nothing to do with reproduction at all. Females of many species mate with males when they are non-fertile (marmosets for example). And same-sex sexual behavior, which is definitionally non-reproductive, occurs in every vertebrate species in which it has been looked for, along with some non-vertebrates (bedbugs, for example, or fruit flies).

This evidence alone should lead us to expect that many animals experience sexual pleasure in much the same way that humans do — that the pleasure involved in sex leads many animals to seek it in non-reproductive contexts, and that this aspect of sexuality is not as unique as humans may like to think. This insight is surely vital to understanding sex in other species, not to mention all other aspects of their behavior too.

Jamie Lawson is a Teaching Fellow in Anthropology at Durham University. This article was originally published on The Conversation. Read the original article.