New study finds that fish have been talking to each other for more than 150 million years. 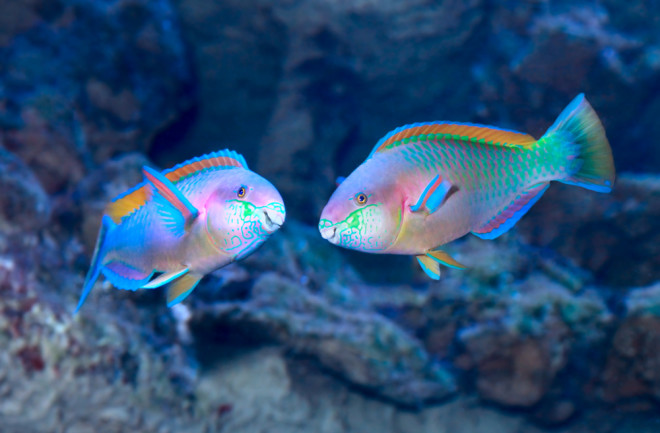 We’ve been learning lately there’s more to fish than we realized. Fish domesticate other animals; they can be relied on in a crisis; and they aren’t half-bad drivers. Now, we’ve learned they can talk.

Science long has known some fish occasionally make sounds, but until recently the behavior was thought to be relatively rare. However, when researchers at Cornell University decided to take a closer look and see just how widespread the phenomenon was, they found it wasn’t rare at all. It’s not new, either. Some fish have been chatting to one another for at least 155 million years.

The researchers analyzed existing scientific papers, books, conference proceedings and technical reports, as well as recordings of fish sounds. They looked at the anatomy of fish to determine whether they have the correct “hardware” to make sounds (for example, “drumming” muscles attached to the swim bladder); and they scoured literature published prior to the advent of underwater microphones for references to fish sounds.

All this detective work revealed that at least 175 families of fishes communicate with sound or are likely to. The more remarkable finding was that the behavior evolved more than 33 separate times over the last 155 million years.

“That suggests a massive selection pressure to exploit the use of sound in communication,” says Aaron Rice, an expert in bioacoustics at the K. Lisa Yang Center for Conservation Biology at Cornell University and lead author of the study. The reason for that pressure is speculative, but likely it’s because many of these fish species live in low-visibility conditions or in places where their lines of sight are limited. “Some species, such as the black drum, whose calls are 165 decibels, can likely be heard 10 kilometers away,” says Rice.

What’s Everybody Talking About?

These sounds, called soniferous behavior, are not a by-product of locomotion or feeding, but true communication between or among animals. So what are they talking about? Pretty much what you’d expect: sex and food. But interestingly, not only that. Rice says fish communication is used for group cohesion and identification as well. One family of fish in the study, called sweepers, makes a sound that’s used as a contact call, something Rice describes as, “Hey, I’m over here!” Rice says that’s one of the first examples of that type of call in a fish. “But there are a bunch of calls where we’re not sure what the behavioral role of the sound is,” he says.

Nonetheless, fish do have a lot to talk about. Though those of us marooned up here on dry ground often think of fish as swimming alone — and quietly. In the depths, fish are — for the most part — extremely social animals. Rice points out that some fish form lifelong care bonds. Some move in schools of hundreds or thousands. Even more remarkably, Rice describes groups made up of a variety of species hunting or foraging together.

Pipe Down Down There

That fish depend on sound for communication makes the issue of underwater noise pollution even more urgent. An excess of human-generated noise could prevent fish from communicating with each other, thus interfering with feeding and mating and any number of other crucial aspects of fish life.

In addition, these findings provide an important measure for the health of aquatic ecosystems. “The idea that healthy ecosystems are rich and alive with biological sounds goes back to Rachel Carson’s Silent Spring,” says Rice. In a wetland, for example, frogs croaking and birds chirping tell you the ecosystem is in good shape, he says. If it's quiet, that's a cause for alarm. The same is true of underwater habitats.

“An underwater ecosystem should be alive with the sounds produced by fishes and whales and shrimp and all the other wonderful creatures down there,” he says, “A silent ocean habitat is not a good thing. And we need to be extremely judicious about making sure it doesn't happen.”

If you’re wondering what fish talk sounds like, wonder no longer. Here’s an audio file of an oyster toadfish having its say. Unfortunately, no translation is available at this time.