"Polar vortex" often is used to describe an extreme cold weather event like the one currently unfolding. But this perpetuates a misunderstanding about what this feature really is. 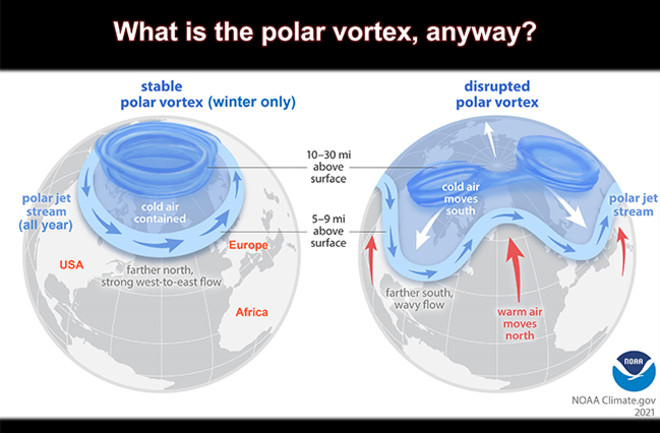 Although the polar vortex and polar jet stream influence each other, they are two distinct things. When the polar vortex, up in the stratosphere, is especially strong and stable (left globe), it encourages the polar jet stream, down in the troposphere, to shift northward. This bottles up cold air in the Arctic. But when the vortex weakens, shifts, or splits (right globe), the polar jet stream can in turn become very wavy, allowing warm air to flood into the Arctic and polar air to sink down into the mid-latitudes. (Credit: NOAA Climate.gov graphic, adapted from original by NOAA.gov.)

Santa’s Bringing A Piece Of The Polar Vortex To Town - Prepare Now.

This was the headline in a major U.S. publication as brutal Arctic conditions began surging south in an event that will soon envelope most of North America.

The polar vortex often is blamed in news accounts for severe wintry weather like this. But here's the thing: The much hyped feature has never come to your town, or mine, and it never will.

It simply can't. That's because the polar vortex is a strong band of winter winds blowing ten to 30 miles up in the stratosphere, centered over the North Pole. It simply does not exist down here at the surface where we experience wintry weather.

What's actually coming to town this time (or already has, depending on when you read this) is savage Arctic cold surging south through a door swung open by a big dip in the jet stream. At an altitude of about five to eight miles high, this feature flows much lower in the atmosphere that the polar vortex, and typically farther south as well.

The jet stream is forecast to make a big, sweeping southward dip, progressing roughly from west to east across much of North America, as seen in this animation running through Christmas Day. (Credit: Animation by Tom Yulsman using images from earth.nullschool.net)

"As atmospheric scientists, we cringe when the term polar vortex is used to loosely refer to blasts of cold weather," Zachary Lawrence and Amy Butler wrote in The Conversation after a similar Arctic outbreak last year. "The actual polar vortex can’t put snow in your backyard, but changes in the polar vortex can load the dice for wintry weather – and this year, the dice rolled Yahtzee."

As was the case with last February's Arctic outbreak, the dice are coming up Yahtzee once again.

Blaming wicked winter weather on the polar vortex is nothing new. Prior to last February's outbreak, there were headlines like this: "Near-blizzard conditions forecast on Cape Cod as polar vortex moves through Massachusetts." Uhm, no.

The misconceptions go back at least to January of 2014, when a particularly extreme outbreak of Arctic cold was hailed in numerous headlines as the "polar vortex." (Okay, I admit it — I've even done it myself. Mea culpa!)

To help me sort all of this out, and, I hope, dispel any confusion you may have, I turned to Jennifer Francis, Senior Scientist at the Woodwell Climate Research Center and an atmospheric scientist known for her research involving the polar vortex.

"I've been on a campaign for awhile now when giving public talks, trying to explain that there is all this confusion about what the stratospheric polar vortex really is," she told me. "I make no bones saying it is not happening in the lower atmosphere — only in the stratosphere, and only in winter."

She points out that sometimes the vortex and jet stream influence each other. "But other times, they are completely independent of each other."

When they do influence each other, how does that actually happen? It turns out that scientists have some good ideas about this, but the details aren't fully worked out. In a nutshell, here's what's known:

Ordinarily, the stratospheric polar vortex is tightly constrained above the Arctic, with winds blowing in excess of 100 miles per hour. This helps to bottle up unimaginably frigid air: Within the confines of the vortex, temperatures can plunge lower than minus 100 degrees F.

But the circular band of strong winds can get knocked out of whack by weather systems that move lower in the atmosphere, causing it to become distorted. As Zachary Lawrence and Amy Butler put it in their Conversation article, "Like an elastic band, the vortex usually rebounds back to its normal shape and size, maintaining its strong winds and low temperatures."

But sometimes the whack to the vortex can be so significant that it elongates greatly, or even breaks into two or more pieces. (For a terrific simulated 3-D animation by Lawrence showing what that looks like, check this out.)

"Sometimes it stretches, and it can even break into separate swirls," Francis told me. "When that happens, we know we're going to get wacky weather somewhere over the Northern Hemisphere. This is one of these times."

As of Dec. 18, 2022, the stratospheric polar vortex was stretched into an oval shape, allowing cold stratospheric temperatures to spill farther south than normal. When this happens, the jet stream — a separate feature from the vortex that flows lower in the atmosphere — often becomes wavier. This can allow Arctic air to spill south at the surface, triggering frigid outbreaks. (Credit: tropicaltidbits.com)

How does an out-of-whack stratospheric polar vortex translate to changes in the jet stream that open the door to Arctic air flooding south at the surface?

"It is a very complicated connection between the two, and it varies," Francis said. "Models don't have the stratosphere very well represented, so this is the subject of ongoing research."

This much is known: The jet stream can begin to feel what's happening way above it when the vortex elongates or splits up. And as is occurring right now, it can develop big undulations, with the jet stream flow in some places plunging much farther south than usual, bringing Arctic conditions with it.

The forecast outbreak of frigid Arctic air and progress of a major winter storm is seen in this visualization running from the morning of Dec. 21, 2022 through Christmas Day. Each frame advances by 12 hours. (Credit: Animation by Tom Yulsman using visualization data from earth.nullschool.net)

But of course, numerous other interacting factors complicate things. Right now, for example, we're in the middle of a La Niña episode, which has its own influence on the jet stream.

Last year, for example, scientists found a chain of processes linking Arctic climate change to disruptions of the stratospheric polar vortex, and ultimately to periods of extreme cold in the northern midlatitudes. But other research has shown that rising trends in jet stream waviness and extreme cold outbreaks that occurred in prior decades had not continued between 2010 and 2020 — even as Arctic warming had intensified. So the jury is still out on this question.

Beyond the climate change issue, all of this complexity means that when the stratospheric polar vortex begins to get out of whack, it's quite challenging to forecast how the weather might respond weeks hence. With time, however, weather models begin to get a better handle on all the influencing factors, eventually helping forecasters say with confidence where and when an Arctic outbreak will occur.

Temperatures Are About to Plunge

As I'm writing this at a little past noon on Wednesday, Dec. 21, the temperature where I live near Boulder, Colorado has climbed to a downright balmy 50 degrees. But I know the jet stream door to the Arctic is now wide open. So in a few hours, the snow will begin to fly, and by midnight, give or take, temperatures will have plunged to below zero.

An update as of 12/22/2022: Confusion about the polar vortex continues. The N.Y. Times has published a story saying, "The polar vortex is descending on the midsection of the United States, bringing bitterly cold Arctic air and causing temperatures to plunge rapidly in many areas."

It's true that the stratospheric polar vortex has stretched, causing part of it to move further south over North America than normal. But use of the word "descending" is particularly misleading in this context, implying that the vortex has brought the Arctic conditions down to the surface. As we've seen, this is scientifically inaccurate.

This would have been better: "A gigantic southward bow in the jet stream has opened the door to the Arctic, allowing brutal cold to flood across a large swath of North America and sending temperatures plunging, in some places with record speed. It's the result of a cascade of atmospheric events that began weeks ago when the stratospheric polar vortex — a band of high-speed winds normally swirling high over the Arctic — began to stretch south in places."

For a scientific examination of these issues, check out this May 2022 paper that Zachary Lawrence and Amy Butler contributed to: "What's in a Name? On the Use and Significance of the Term “Polar Vortex”