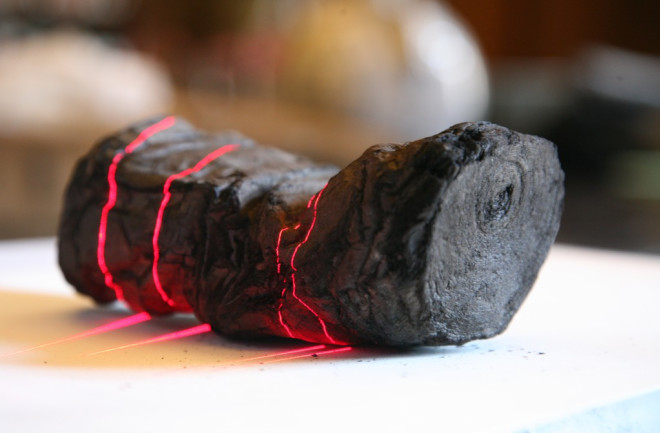 An ancient scroll being scanned. Image courtesy University of Kentucky Scientists are proving you can judge a “book” without ever cracking open the cover. And by book, we mean a 2,000-year-old scroll buried after the eruption of Mt. Vesuvius. Over 260 years ago, archaeologists discovered hundreds of ancient scrolls left behind in an ancient library in Herculaneum, which was covered in volcanic material after the infamous eruption in 79 A.D. Unfortunately, these charred scrolls are next to impossible to open without destroying them, leaving their contents largely a mystery. But a new imaging technique allows researchers to see what’s written inside, without ever opening the delicate artifacts.

If At First You Don’t Succeed, You Should Stop

In the 18^th Century, Charles the Bourbon King of Naples sent an archeological team to Pompeii and Herculaneum to dig up artifacts after scattered discoveries by well diggers and treasure hunters. In 1752, this team discovered their first scrolls, and by 1754 they had discovered an entire library filled with scrolls inside an ancient villa. Finding the scrolls was well and good, but, of course, people wanted to know what was written. Over the centuries, various techniques were devised to unroll the scrolls, but they usually ended up destroying the brittle papyrus. So, archaeologists gave up on opening the texts to spare the culturally important artifacts. That is, until now.

For years, researchers have used X-ray technology to get a deeper look at anything from molecules to ancient tombs. Basically, you blast an object with X-rays, and different elements in the object reflect those X-ray beams back at different patterns. However, the Herculaneum scrolls presented a unique challenge: The scrolls were scorched and sealed, and the text was written with black, carbon-based ink. The current X-ray techniques weren’t enough detect the pattern variations between the ink and the papyrus, so researchers tried something new. Their new approach, called X-ray phase-contrast tomography (XPCT), builds a higher-definition image by detecting the slight relief between the letters and the papyrus. The letters rise just one hundred microns above the papyrus, but that’s enough to build a clearer picture than any other technique.

We’re sorry, but it’s still going to be a while before the scrolls are completely interpreted. However, researchers’ new technique is an encouraging start. Using XPCT, researchers examined two scrolls and could clearly see letters that formed short phrases such as “would fall” or “to deny,” but not much more. The scrolls’ small sizes and numerous folds make it difficult to focus on every letter or gauge the letter’s orientation. But what's important is that researchers proved that you could peek inside these ancient scrolls without destroying them. They published their findings this week in the journal Nature Communications. Researchers have their work cut out for them if they want to get a complete read on the rest of the scrolls, but at least they have the right tool to do it.