X-Rays From Accelerator Show Archaeopteryx Was Chemically Linked to Birds 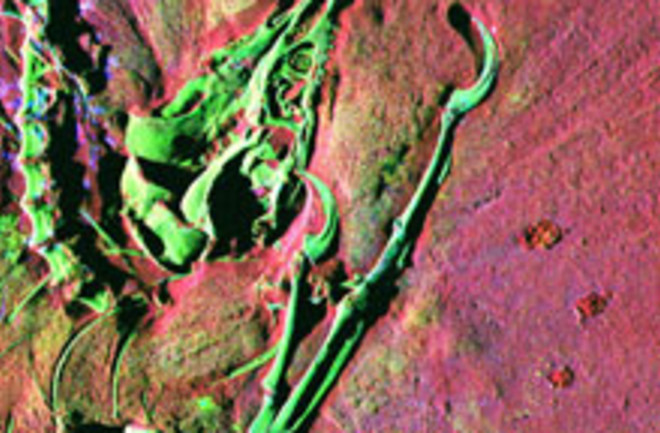 Nearly 150 years after scientists discovered the first specimen of the dino-bird archaeopteryx, we get to see what it was made of. Researchers who scanned one of the fossils with x-rays say the specimen contains not just impressions of fossils, but actually the remains of soft tissue with some of the chemical components intact. They published their findings (in press) today in the Proceedings of the National Academy of Sciences. The team led by Roy Wogelius scanned a 150-million-year-old Archaeopteryx fossil using a synchrotron-type particle accelerator located at the Stanford Synchrotron Radiation Lightsource in California.

The synchrotron excites atoms in target materials to emit X rays at characteristic wavelengths. The scan reveals the distribution of elements throughout the fossil. The green glow of the bones in this false-colour image shows that Archaeopteryx, like modern birds, concentrated zinc in its bones. The red of the rocks comes from calcium in the limestone that had encased the fossil since the animal died [New Scientist].

That distinct difference you can see between the bird remains and the surrounding ground, made clear by the false-color image, made Wogelius confident that the elements he found came from the Archaeopteryx remains and not from contamination. To him, then, it was clear:

"We talk about the physical link between birds and dinosaurs, and now we have found a chemical link between them. In the fields of palaeontology and geology, people have studied bones for decades. But this whole idea of the preservation of trace metals and the chemical remains of soft tissue is quite exciting" [Sydney Morning Herald].

While this Archaeopteryx finding adds to our knowledge of this strange creature, the real importance of this study could lie in the method.

Other methods to analyse fossil specimens such as x-ray fluorescence and electron microscopy can only analyse samples on microscope slide scale and therefore to study Archaeopteryx by these methods, it would have to be destroyed. Breaking up the specimen was not an option, says Wogelius [Chemistry World].

Thus, he argues, this tool—which goes by "synchrotron rapid scanning x-ray fluorescence" (SRS-XRF)—could prove invaluable to paleontologists who want to know what a specimen is made of without tearing it apart.

Related Content: DISCOVER: Birds May Have Used Big Brains To Outlast the Dinosaurs

The Loom: A Hairy Archaeopteryx?

80beats: "Bizarre" And Fluffy Dino May Have Used Feathers To Attract Mates