World's Smallest Dinosaur May Actually Be an Ancient Lizard

What was to be a record-breaking specimen turned out too good to be true, fueling an ongoing ethical controversy. 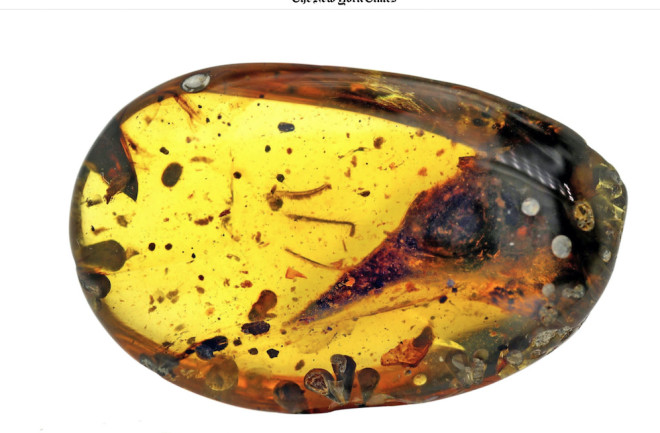 Both Oculudentavis fossils were found encased in amber. Pictured here is the sample described in the Nature report. (Credit: Lida Xing)

This article appeared in Discover’s annual state of science issue as “A Tale of Two Lizards.” Support our science journalism by becoming a subscriber.

The fossil was heralded as the smallest dinosaur ever found. Named Oculudentavis and known from a skull encased in 99-million-year-old amber, the living animal would have been about the size of the smallest modern hummingbirds. Strange, then, that such a tiny fossil stirred the largest paleontological controversy of the year.

From the time of the fossil’s March publication in Nature, outside experts were skeptical of the animal’s identity. The initial analysis by paleontologist Lida Xing and colleagues couldn’t pin down where Oculudentavis fit in relation to other dinosaurs; if anything, the fossil had characteristics that were both primitive and advanced for a dinosaur of its age. Rumors began to spread that there was a second specimen of the same animal that confirmed the creature’s identity as a lizard.

Then, on July 22, the Nature paper was retracted. Paleontologists and dinosaur enthusiasts alike puzzled over what the change meant for the validity of the name if the paper describing Oculudentavis technically no longer existed, and what all the fuss might have to do with the rumored second specimen. Experts got partial answers from a pre-print publication posted online in August by a separate research team. It described another Oculudentavis specimen from the same amber quarries.

The name Oculudentavis includes the Latin words for “eye” and “tooth,” and a CT scan of the skull showcases those features. (Credit: Li Gang)

The fossils had inadvertently passed each other like ships in the night. “We started working on the lizard material in July of 2019 and had already highlighted our specimen as an unusual lizard that we should prioritize,” says University of Bristol paleontologist Arnau Bolet. Along with his colleagues, Bolet became aware of the second specimen at a workshop in December later that year. When they completed their analysis a few months later and determined where Oculudentavis fell on the evolutionary tree, they notified the authors of the Nature paper, who originally had described the fossil as a bird. Both specimens were Oculudentavis, and both actually seemed to be lizards.

While messy, “this is precisely how science works,” says Bolet’s colleague Susan E. Evans of University College London. New fossil species are named at a rapid pace, and each description presents a hypothesis that will be tested against further finds and analysis. Oculudentavis is far from the first prehistoric animal to be revised after additional discoveries and research. The famed dinosaur Brontosaurus, for example, was relabeled as Apatosaurus in 1903 because of similarities between fossils of both specimens. Then, in 2015, another group of researchers proposed that Brontosaurus really was a distinct animal and the name should be revived. The changing nature of Oculudentavis is just another example of how paleontology self-corrects.

However, the tale goes deeper from there. Both specimens of Oculudentavis came from the same mine in Myanmar. The mine, as well as others in the area, has yielded swaths of fossils — everything from baby birds to new species of insects and even, somehow, marine species like coil-shelled ammonites. The amber-enclosed fossils from these quarries are so prized that an individual specimen can cost as much as a luxury amber, as it’s known, has been a topic of discussion in the paleontology community in recent years.

Most of Myanmar’s amber mines are in the country’s Kachin state, where conflicts are ongoing between local minority groups and the government. In 2017, Myanmar’s military began a campaign to seize the area containing the amber mines, torturing and murdering civilians in the process. The conflict came to a head in January 2018 when soldiers killed three people and trapped thousands in the conflict zone. That same year, the U.N. declared the military’s violent actions genocide and a crime against humanity.

The amber that is extracted from the disputed mines isn’t sold in Myanmar itself. Piece by piece, the fossils are smuggled to China and sold there, often sans information about where they were excavated or who benefits from the sale. What might look like a well-preserved bird or insect to a scientist may be amber that only keeps the cycle of violence going, part of a market that, by one estimate, can bring in more than $725 million each year.

Some researchers protest that seeing the amber-enclosed fossils disappear into private collections would be a huge loss to science. Others argue that many amber pieces are not kept in reputable or recognized museums, anyway, and that the possibility of a fossil sale fueling deadly conflict is reprehensible.

The second Oculudentavis fossil, the specimen identified as a lizard, was found in 2017, reportedly prior to the conflict in the area, and brought to the attention of study co-author Adolf Peretti. The fossil was loaned to the researchers for testing and then legally purchased and exported to a museum in Switzerland. But the amber markets are still open, and paleontology has yet to fully reckon with the ethics of a commercial market that buys, sells and even steals fossils from places all over the world. “As with any fossil material,” says Bolet’s colleague Juan D. Daza, “researchers should be careful and transparent.”