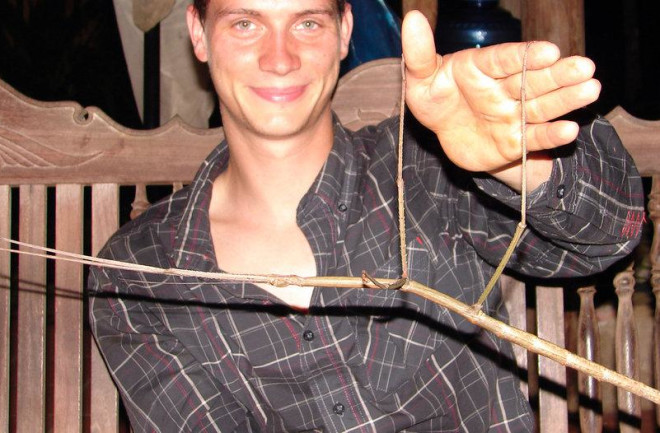 Entomologist Joachim Bresseel holds a female Phryganistria heusii yentuensis. At 21 inches long (with legs outstretched), it’s the second largest insect species on Earth. (Credit: Bresseel & Constant, Royal Belgian Institute of Natural Sciences) Stick insects have a strange beauty. These slow-moving insects are one of nature's most well-known marvels of camouflage. And their ilk just got a little stranger: entomologists working for the Royal Belgian Institute of Natural Sciences have discovered a brand-new species of stick insect nearly two feet long — the second-longest insect ever discovered.

Entomologists struck out to Vietnam’s Tay Yen Tu Nature Reserve to study Phasmatodea — the scientific name for stick insects. These twiggy bugs are poorly studied due, in part, to the difficulty in finding them. Stick insects live in remote locations, are highly camouflaged and are most active at night. However, like many challenges, brute force is a viable solution. Whilst beating the trees in Vietnam, entomologists triggered a common fear response in branch-hugging insects: They played dead. The “dead” insects loosened their grip on the branches and fell onto a sheet below where they were collected and studied. (Although this method was used in the study, the record-setting walking stick, according to Wired, was technically discovered in a bush.)

Phryganistria heusii yentuensis (above), was found in a Vietnamese nature reserve northeast of the Hanoi. (Credit: Belgian Royal Institute of Natural Sciences) The record-breaking insect, Phryganistria heusii yentuenis, measures 21 inches long with its legs fully outstretched. P. heusii yentuenis, like other stick insect species, is sexually dimorphic, meaning males and females are visibly different. Female P. heusiiyentuenis are roughly twice the size of males, so the record for second-longest insect belongs to a female. Researchers published their findings in the European Journal of Taxonomy. The world's longestinsect, called Chan's megastick, was discovered in 2008 on the island of Borneo.

Stick insects have devised clever defense mechanisms to stay alive in the wild — including, most obviously, looking like a branch. However some stick insects can also change colors or mimic the swaying of a branch in the wind. Stick insects are also known for their marathon copulation sessions, which can last for several months in some species. Recent studies by other research teams have doubled the number of stick insects identified, bringing the total number of known species to about 70. Southeast Asia is said to host the largest variety of stick insect species, and researchers are certain there are more to discover.

The current study focused on more than just collecting and identifying new species: researchers also cleared up confusion regarding older specimens. Since male and females differ so much, some stick insects from the same species were mistakenly identified as two separate species. The authors of the paper are continuing to collaborate with Vietnamese biologists to expand a reference museum of these unique insects. It’s expected the team will double the number of identified stick insects within the next few years. You’ll just have to, dare we say, stick around to find out what other creatures are hanging out in the trees of Vietnam.