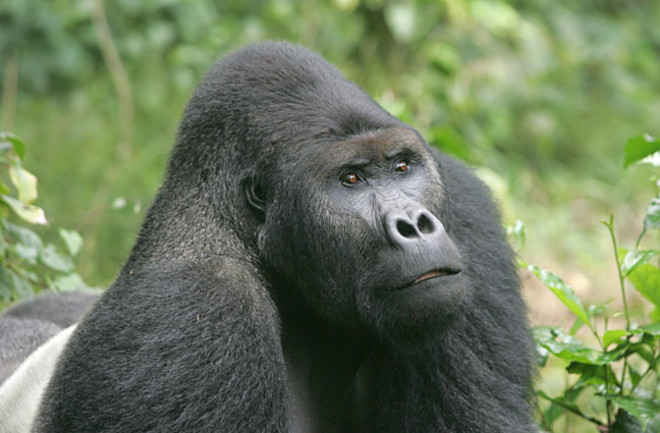 A male gorilla named Ciminuka at Kahuzi-Biega National Park in 2005. (Credit: Graueri Gorilla/Wikipedia) For the first time in 20 years, wildlife biologists conducted a comprehensive population survey of the Grauer's gorilla, the largest primate in the world. What they found confirmed their worst fears: In the time since the last gorilla census was taken in 1994, their population declined by an estimated 77 percent. The researchers estimate that there are only some 3,800 Grauer's gorillas left in their native habitat in the Democratic Republic of the Congo, which has been wracked with human conflict for the past two decades.

Researchers from the Wildlife Conservation Society finally gained access to the DRC in 2011, and recently published the results of a four-year study estimating the number of gorillas that remain in the country. Grauer's gorillas inhabit some of the most remote regions of the jungle, and researchers combined observational recordings of gorilla nests and tracks with statistical analyses to approximate the population size. While pinpointing an exact number is difficult, it is clear that gorilla numbers have dropped precipitously since the beginning of the Congolese Civil War in 1996. The researchers say that if current levels of decline continue, the Grauer's gorilla will disappear from most regions within two to five years. They published their report earlier this month. The researchers conducted a parallel study of chimpanzee numbers in the region as well and found that their population had decreased by between 22 and 45 percent in the same time period, likely for the same reasons that the gorillas were disappearing. The study is a vivid reminder of how human conflict affects vulnerable animal populations. Groups of guerrilla fighters have occupied the DRC since fighting began in the region, and they've been blamed for killing wildlife and limiting researchers' and conservationists' access. Gorillas are targeted as a source of food by militant groups in the jungle, as well as by workers at artisanal mines in the region that are a source of funding for these groups.

The prevalence of unregulated mining combined with the government's failure to adequately fund and support enforcement efforts has led to a steep drop in gorilla numbers, according to the researchers. Nearly all of the regions surveyed for the study saw remarkable declines in estimated populations. Only one area experienced growth in gorilla numbers — the highlands region of Kahuzi-Biega National Park, a protected wildlife sanctuary. The number of gorillas there increased from 130 to 181 between 2000 and 2010, and researchers attribute this small success to protections from park rangers. The report isn't all doom and gloom though, the researchers also recommend several policies that could protect gorillas and stabilize their population. First and foremost, they advocate for regulating mining in the region, which they pinpoint as the main cause of gorilla deaths. They also recommend that the government and NGOs provide alternatives to mining for poor populations in the DRC. Mine workers, according to surveys, said that they would give up mining if alternative means of earning an income were made available. Promoting alternative food sources for workers could also be a viable way to halt gorilla hunting. Finally, they recommend classifying the Grauer's gorilla as "critically endangered" on the IUCN Red List, which would provide additional funding and resources to protect them.