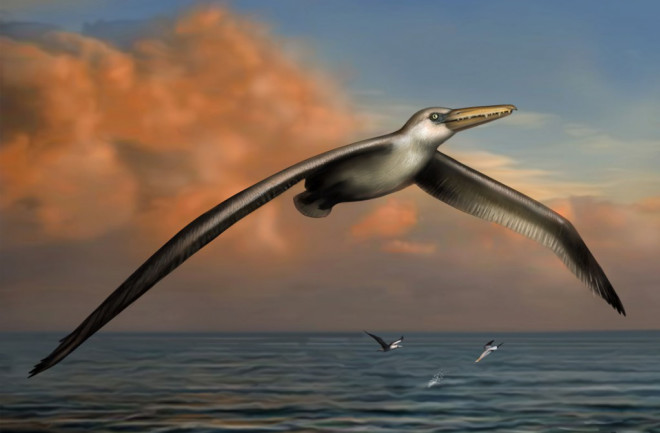 Pelagornis sandersi has replaced Argentavis as the largest flying bird known. Courtesy Liz Bradford With a wingspan double that of today's largest flyers, Pelagornis sandersi was truly the Big Bird of its day. Researchers describing fossil remains of P. sandersi for the first time say the bird had a wingspan of up to 24 feet, qualifying it as the largest flying bird ever to take to Earth's skies. Its size exceeds some estimates for the limits of powered flight, though computer models based on the well-preserved skeleton suggest the animal was an excellent glider. In a paper published today in Proceedings of the National Academy of Sciences, researchers theorize the bird flew long oceanic distances in search of prey, similar to today's albatrosses.

P. sandersi's massive size challenges ideas about powered flight. As a bird's size increases, even with its greater wingspan, the power needed to fly grows faster than the power it can generate for flight. Using a program that models both flapping (powered) and gliding flight, researchers reconstructed P. sandersi's likely capabilities. Due to skeletal features such as extremely long wings in relation to its body size, the models suggest the mega-bird was a fast, efficient glider that could have flown up to 17 meters per second. Although gliding was likely its primary means of travel, P. sandersi may have been capable of powered flight in the right circumstances, including a standing takeoff.

With a wingspan up to 24 feet wide, Pelagornis sandersi dwarfs two of the largest living birds, the California Condor (left) and the Royal Albatross (right). Courtesy Liz Bradford.

Battle of the Big Birds

P. sandersi's size puts it just ahead of Argentavis, previously considered the largest bird known. Argentavis, distantly related to today's Andean condor, ruled the skies over South America 6-8 million years ago and had a wingspan of about 23 feet. Neither bird comes close to the largest pterosaurs, however. The supersized reptile gliders of the Arzhdarcidae family had wingspans of 35 feet or more. Like the rest of Earth's megafauna at the time, however, the pterosaurs perished at the end of the Cretaceous, 65 million years ago. Researchers analyzing P. sandersi note that fossils of the massive bird and its relatives have been found on all seven continents, indicating that the animals were successful for millions of years. Their sudden disappearance from the fossil record some 3 million years ago remains a mystery, but reminds us that no animal is too big to fail.