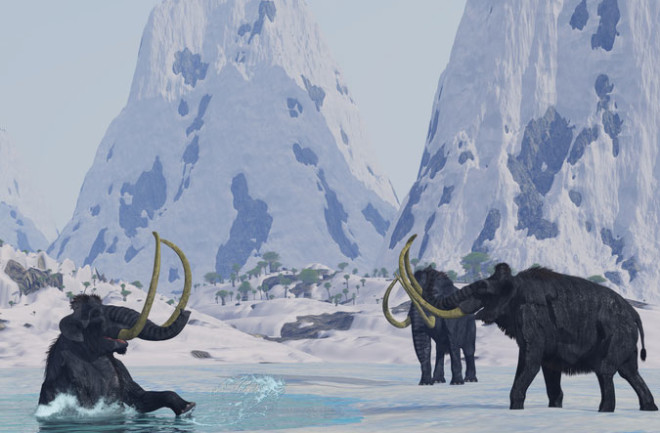 (Credit: Shutterstock) When paleontologists pull woolly mammoth fossils from mud pits, sinkholes, mudflows and other ancient booby traps, odds are it was a male that fell victim to the hazard. This macabre gender bias, researchers say in a new study, serves as a window into the behavioral patterns of these hirsute beasts that died out roughly 10,000 years ago. It turns out, as one might expect, woolly mammoth society may not have been so different from the pachyderm families that roam earth today. An international team of researchers led by Patricia Pecnerova of the Swedish Museum of Natural History used genomic data to determine the sex of 98 random woolly mammoth specimens. In doing so, they hoped to learn more about the social organization and behavior of mammoths in the last 60,000 years of their existence. Some of the most well preserved fossils come from animals that died in natural traps like falling through thin ice, drowning in pools, sinkholes, crevices, hot springs or getting caught in a mudflow. That’s because their remains are sealed instantly and well preserved in these traps, as opposed to animals that died exposed to scavengers and the elements. Therefore, the fossilized remains from trapped animals are more likely to be unearthed today. From researchers’ samples—bone and hair from various locations—66 were identified as males, while just 29 were females. Sex ratios of elephants in the wild today are almost 50/50, and this, researchers believe, was most likely the case for mammoths as well. So what explains the gender bias in the fossil record? The researchers say the gender disparity may be evidence that woolly mammoth herds were quite similar to elephant herds we see today. Females rule in elephant society, with a few matriarchs calling the shots in a herd that's comprised of younger, juvenile males and females. But once the males reach maturity at the age of 15 or so, they are sent out into the wild where they wander on their own, or join with a group of other bachelors. Elephants might disperse this way to avoid rivalries, or to maintain genetic diversity. But when bachelors drift into the wild, they are at a notable disadvantage. Elephant matriarchs are vast stores of wisdom, and their knowledge is crucial for protecting the herd and avoiding dangerous situations. Studies have shown that poaching is all the more devastating when an aged matriarch is killed; that’s because the herd loses that valuable knowledge. So woolly mammoth bachelors might have been falling into traps more often because they were just young, inexperienced whippersnappers trying to navigate a treacherous world. Decades ago, in Hot Springs, South Dakota, mammoth remains from that natural hazard also skewed male, with 13 males and a single female found at the site. In the 1980s, scientists theorized that males' lack of knowledge led them to their doom, and researchers genomic analysis seems to support their theory. It’s an intuitive explanation for the gender disparity in the fossil record, given we know how elephant herds behave today. Still, it’s just a theory, as the researchers caution in their study published Thursday in the journal Current Biology. “Although our data warrant a cautious interpretation since only tentative conclusions can be drawn, combining fossil and genomic data marks an important step in the study of sociobiology of extinct megafauna,” the authors wrote. The big takeaway here is there’s a lot more we can learn from extinct creatures’ fossils beyond what they look like. By analyzing gender distributions, the location of fossils, and other data, researchers can learn about long-extinct creatures’ social organization and behavior.