Wood Bison Roam the U.S. for First Time in a Century 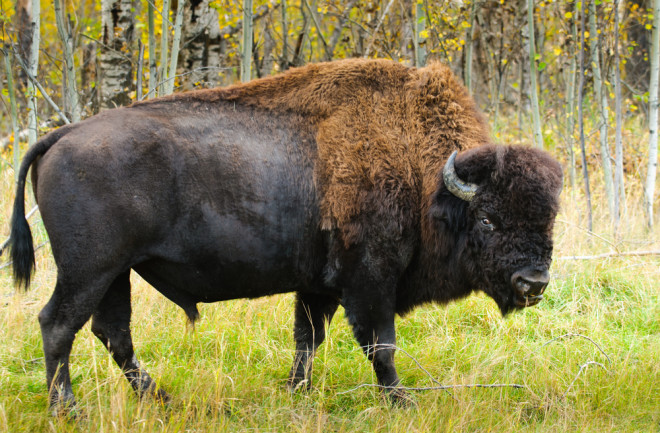 After vanishing from their wild habitats over a century ago, wood bison, the largest land mammals native to North America, now roam freely in Alaska once again.

The first group of 30 juvenile wood bison arrived in the rural Alaskan village of Shageluk after making a one-hour flight from the Alaska Wildlife Conservation Center on Sunday. Over the next several weeks, 70 more wood bison will make the same trip before ultimately being released as a herd into the Inoko Flats — the same lands their ancestors thundered upon for thousands of years.

Years in the Making

Wood bison are the lesser-known and larger cousins of plains bison, the kind that once roamed the continental U.S. (and still do, in isolated areas). Wood bison are native to Alaska and Canada. A fully-grown wood bison bull will often weigh 2,250 pounds, as compared to the 1,900-pound bodies of the smaller plains bulls.

For over 10,000 years, Athabascan natives hunted wood bison for food, shelter and clothing, but the story of their decline is one we’ve heard many times. Overhunting and loss of habitat drove wood bison numbers into decline, and by the early 1900s they were regarded as extremely rare or possibly extinct in the wild.

In 1957 a herd of about 200 wood bison was discovered in Canada. Through sustained conservation efforts by Canadian governmental agencies, wood bison numbers grew to 2,500. The 100 wood bison that are being released came from the Canadian herd.

You can also expect to see the wild herd’s numbers grow rather soon: 25 of the 50 cows being moved are pregnant. The wildlife center confirmed the first successful bison shipment over the weekend.

As the herd is released, wildlife officials will intensely monitor its activities for at least one or two years. Starting with 100 animals provides enough genetic diversity to ensure the herd will continue to grow in the United States. Once the herd reaches 300 or so, a closely regulated hunt could open for people in nearby villages.

For those in the business of preserving endangered species, the wood bison’s comeback is a story rarely told.

“It’s such an opportunity to go back in time and right a wrong. We as people never get a chance to do that, but in this case, they did. And today’s the day we correct that mistake,” Mike Miller, director of the wildlife conservation center, told the Associated Press.

It’s been a long road, but through concerted efforts and collaboration, the wood bison are finally returning home.