With a Whiff, Mice Can Transmit Pain to Each Other 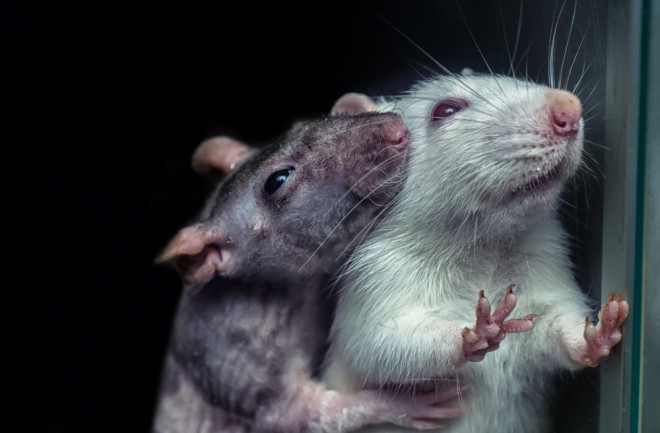 (Credit: Preobrajenskiy/Shutterstock) What hurts one mouse, hurts every mouse. That's the conclusion of a new study examining the social transfer of pain in mice. When one group of mice was exposed to a painful stimulus, a completely unaffected group displayed the same kind of heightened sensitivity as the first. Given that mice are mammals like us, the effect could also exist in humans, as well as informing future pain research.

In their study, researchers from the Oregon Health and Science University worked with two groups of mice: one group that was subjected to a few different kinds of pain stimuli, and one that was left alone. Injecting inflammation-causing toxins or inducing morphine and alcohol withdrawal were among the ways researchers stimulated a pain response. The two groups of mice were kept together, and the researcher periodically assessed their responsiveness to pain by poking them or dipping their tails in hot water. As anyone who's ever had a sunburn can attest, inflammation causes us to feel sensitive to even the smallest stimulus. Without being able to tell if the mice were experiencing pain directly, the researchers used their level of sensitivity to additional painful stimuli as a proxy. As expected, the mice that had been injured were more responsive to the stimuli, what the researchers call "social transfer of pain." What was more unexpected however, was the observation that mice that hadn't been hurt were also more responsive to pain. Upon repeated tests, they found that unaffected mice were up to 68 percent more sensitive to pain after spending time with their injured cage mates. They published their research Wednesday in Science Advances.

Where Does the Pain Come From?

To figure out how the pain was being transmitted, they took their experiment a step further. They set up the experiment as before, with a group experiencing pain and a control group, but this time, they kept the two separate. When they were completely separate, nothing happened — the mice aren't telepathic, after all. But when they mixed pieces of bedding from the injured group with the control mice, they found that they displayed the same sensitivity to pain as before. The researchers believe that the mice are picking up on olfactory clues in the bedding from their pained lab mates, causing them to undergo sympathetic responses. They're smelling pain, in other words. Researchers have known that pain and stress can transfer to others in social settings, but they say this is the first time that symptoms of pain have shown up when the mice hadn't even been introduced to each other. The researchers suspected that they may have actually been picking up on stress responses in the mice, rather than pain responses, so they put the control mice through a series of stress tests, including exposure to heights and an acoustic startle test. The mice showing symptoms of sympathetic pain reacted no differently than mice that not been exposed to any stimuli, indicating that the researchers were observing true socially transferred pain, rather than elevated stress or anxiety levels. It is unknown if the same effect occurs in humans, but the mechanism is certainly probable. When we, or other mammals, experience a rush of emotion or sensation, like fear, or pain, our bodies pump out distinct chemicals. Other studies have shown that being exposed to sweat brought on by fear makes us react faster and startle easier, and the same goes for mice and other mammals as well. In this experiment, the mice in pain gave off a unique chemical signature that other mice could pick up on and react to. The findings should give pause to researchers using mice to study pain as well. If the control mice — who are supposed to remain unaffected by the experiment — can be influenced by their cage mates, it could throw the results of such studies off. It gives new meaning to the phrase "I feel you, man."