Winter is Coming, and Hamsters Are Getting Feisty 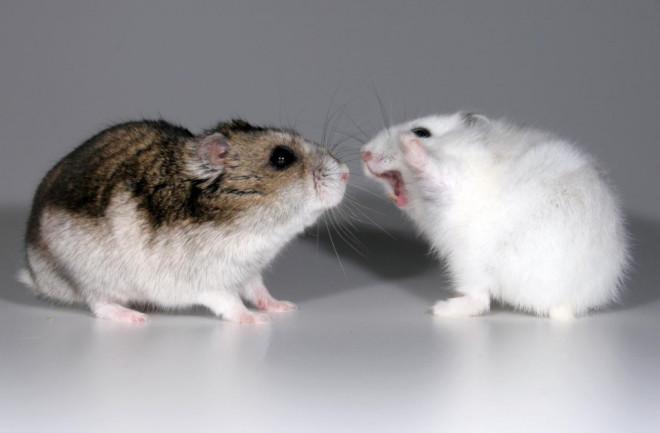 A female hamster (right) is not happy, and makes it known. (Credit: Frank Scherbarth)

What makes female Siberian hamsters ready to duke it out in the winter? Melatonin.

The same hormone gaining popularity as a natural sleep aid plays a major role in seasonal aggression in female hamsters, according to new research. The study, published this week in the Proceedings of the Royal Academy B, is a collaboration between the Indiana University Bloomington College of Arts and Sciences’ departments of Biology and Psychological and Brain Sciences.

And just as a reminder: Winter is coming.

Lead author Nikki Rendon, a Ph.D. student in biology, said biology professor Gregory Demas had previously published research on seasonal changes in aggression in male hamsters, and she wanted to see what was going on with females. She and the team, which included Demas, expected to find a link between aggression and sex hormones, but what they found surprised them.

Sex hormones are often connected with aggression, but previous research in Demas’ lab showed that in winter, the hamsters’ reproductive hormones originate in the adrenal glands — situated near the kidneys — rather than in the ovaries or testes. In hamsters, the gonads also grow less active in the winter.

For male hamsters, a previous study showed, a hormone secreted by the pituitary gland increased the amount of DHEA — a sex steroid that is a precursor to testosterone and estradiol — pumped out by the adrenal glands. But in females, DHEA had no effect.

Instead, the current study found that melatonin acted directly on the adrenal glands of female hamsters, stimulating the release of DHEA. When nights get longer, melatonin levels go up. So, in the lab, they controlled the animals’ light exposure to put one group of hamsters in summer mode, and another in winter mode. Then, they looked at what happened with melatonin production.

Female hamsters in winter mode grew feisty. Further, Rendon said when they gave the summer hamsters an increased dose of melatonin, they saw a notable shift.

“If you leave them in the summer conditions but give them melatonin, they turn aggressive like their winter counterparts,” she said.

Hamsters, clearly, aren’t people, so there’s no way to use this study to predict a similar effect on humans who artificially increase their melatonin levels, but Rendon said the results make her think.

“It’s shifted my attitude on melatonin and DHEA,” she said.

People take melatonin for sleep, and DHEA is available as a supplement for athletes — though it is banned at the professional level. It is easy to obtain these chemicals for home use, and this study, she said, shows these kinds of hormones can have wider-reaching effects than those that are most apparent.

“It makes me think about what you are putting in your body,” Rendon said. “People are not hamsters, but there are likely effects that we don’t know.”

The study, in particular, highlighted differences that can exist in the body chemistry and function between males and females of the same species. Recognizing and quantifying those differences is a problem not just in animal studies, but in human ones as well.

The default, she said, is for research to focus on males. Analyses of human and non-human research has shown over-representation of male subjects. In one survey of non-human research, male animals were used 5.5 times more than females, and according to a 2001 U.S. General Accounting Office review, men made up 70 percent of participants in initial, short-term drug safety studies. That’s one reason she wanted to focus on female hamsters.

When people were asked about aggression, she said, the phrases that came up most were things like “male-like” and “testosterone.”

“This is such a unique story because the female hamsters display aggression like males do, but it’s not from testosterone,” she said. “It challenges us to rethink the dogma or the framework. It’s not quite white and black for a lot of these systems. … Any time we put chemicals in our bodies that mimic our hormones, we have to pay attention.”