Winemaking: a Combination of Science, Nature, Art, and Footwork

Each glass tells you something about the wine's milieu as well as the vintner's approach. 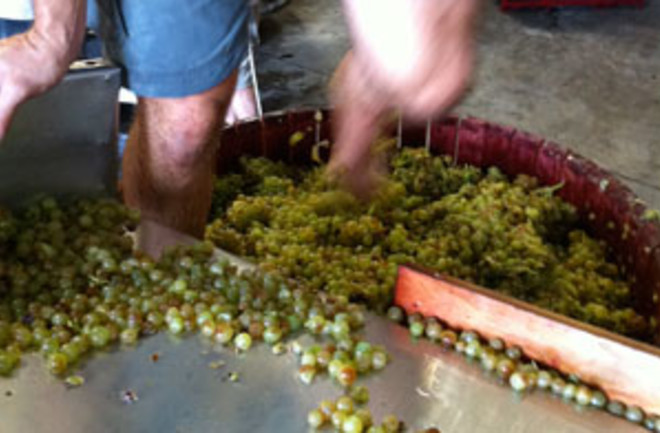 The Wine WhisperersTerroir [tare-wah'], a French concept, translates roughly to the way climate, environment, and geology are expressed through wine. Terroir is so important to French viniculture that wine is identified by the name of a region—Champagne or Bordeaux—rather than by the name of the grape, as Pinot noir or Cabernet are in the United States.

But here in central California the French aesthetic has recently taken hold. Some local winemakers claim that rainfall, irrigation, the degree and direction of slope, the mineral and biological content of the soil, the agricultural history of the vineyard, the indigenous yeasts, even the number and variety of worms in the soil all impart character to wine. For California’s new “terroirists,” expressing this kind of nuance is the job at hand.

The new terroirists come in a range of ideologies. At the far left of the spectrum are those such as celebrity winemaker Andy Erickson, who co-owns Favia wines and also makes wines for six top wineries. They use no commercial yeasts, which convert the sugar in grapes to alcohol during fermentation, utterly trusting their vintages to the local soils and microbes. The biochemical composition of any vineyard’s grapes can vary from harvest to harvest, however, so other devotees of terroir hedge their bets and manipulate the wine’s chemistry, using nutritional additives, for instance, when they feel it necessary to achieve a certain taste. At the other extreme, some large, industrial wineries liberally use trade-secret chemicals to produce entirely predictable, generally palatable, and almost character-free wines, all the while casually bandying about the term “terroir” because—well, these days just about everyone in California does.﻿

I ask Andrew Waterhouse, a chemist at the University of California, Davis, and an expert on the effects of wine chemicals on taste, for his perspective. While he’s as fond as anyone of the honest taste of grape, he judges the whole terroir obsession a bit overblown. “The impact of the site on wine is very important,” he says, “but it’s often overstated.” To him, managing the rich community of microorganisms that colonize grapes during fermentation is more important than focusing on terroir.

Whereas conventional winemakers buy commercial microbes, true terroirists use only local microorganisms in their fermentation tanks. That reliance on nature introduces an element of risk, because the wrong kind of microbe can ruin a wine. In the presence of oxygen, several types of bacteria, along with a few species of yeast, convert glucose or alcohol to acetic acid; too much of that and a winemaker is left with vinegar. Because of this, winemakers need to control exposure of fermenting grapes to oxygen. “The cliché is that wine is God’s gift to man,” Waterhouse says. “But vinegar is the ultimate product of grapes plus yeast. It takes a winemaker to stop the process at wine.”

I set off to several Bay Area vineyards to see firsthand how vintners of differing levels of commitment to the idea of terroir understand the wine- making process. Two days of exploring the techniques of this new breed of California winemaker will awaken me to tastes I never imagined.

The Foggiest IdeaThe summers are dry in Napa Valley, and the days get hot. Then in the evenings, cool Pacific air sweeps over from San Pablo Bay. In the autumn this air brings thick fog to the southern half of Napa Valley.

Greg Allen, a winemaker at the Far Niente Winery off the St. Helena Highway in Oakville, depends on this fog. He’s in charge of Dolce, Far Niente’s highly lauded dessert wine blending sweet Sémillon grapes and aromatic, high-acid sauvignon blancs. The autumn fog brings airborne mold spores that latch on to the Sémillon grapes and break the fruits’ skin, beginning a process of dehydration that allows sugars to concentrate in the grapes.

I place Allen­—a former MIT-trained biomedical engineer­—somewhere in the middle of the terroirist spectrum. While he relies on the area’s microclimate to produce sweet grapes, he uses commercial yeasts. Allen also takes his wine to the lab to help him understand each barrel’s chemical and biological profile to a fine degree, a high-tech concession that some committed terroirists do not make. But when I ask how he uses that information, he explains that, once fermentation starts, his options are limited.

“I can convince the yeast to stop fermenting by turning off the lights and making it colder,” he grins. “I can give them a blast of sulfur gas, which is an antimicrobial, to ward off interaction with oxygen…” His voice trails off. A shrug hints that he has largely shown his hand, suggesting that even with a world of data, a winemaker who respects what the vineyard has wrought doesn’t have many cards to play.

The Far Niente wine tour should not be missed, if only because the place screams so loudly of fashion and heritage that I expect Alexis Carrington to greet our group. (Remember her? Joan Collins in Dynasty.) My tour ends with a tasting. We drink our Dolce with a light blue cheese. Let me be frank. The earth moves.

Natural Vines, Divine Wine?At A Donkey and Goat Winery in Berkeley, I meet with winemaker and co-owner Jared Brandt. Some of his vineyards are in Monterey, where microclimates range from cool to warm. Some are on a breezy coastal stretch of Mendocino County. And some are in the Sierra foothills, which have a four-season climate and shallow soils known for producing low yields of high quality. Brandt makes natural wines—absolutely no chemical manipulation—and my limited experience with natural wines is that they taste of vinegar. So my curiosity about Brandt’s Chardonnays and Rhône varietal wines is high.

Brandt’s winery is in an old ink factory in an industrial part of Berkeley. I think of it as the antimatter Far Niente: Filled with cranky technology, it screams of neither fashion nor heritage. And I think of Brandt as sitting philosophically on the left bank of the terroirist world. He is the only winemaker I meet who has taken untested and, by industry standards, dicey steps to draw out terroir. Most grape growers prune their vines. Among other benefits, this affords grapes the right measure of sun and shade, and it ensures that not too many grapes vie for the soil’s scarce water and nutrients. In 2009, however, Brandt let one vineyard grow wild. No pruning, watering, fertilizing, or weeding. Only mowing. The unfiltered, unclarified, and sharp-tasting Untended 2009, Anderson Valley Chardonnay sold out fast.

Like most fully committed terroirists, Brandt uses no plastics, commercial yeasts, or bacteria, and no nutritional additives—although in a pinch he does use sulfur dioxide to control fermentation and bacteria. All that, and he crushes his grapes by foot. Brandt explains that it is important to crush grapes gently enough that pulverized seeds don’t release harsh tastes. “High-end machines do the job well,” Brandt says, “but the foot is the perfect tool. And my friends love to stomp.”

Temperatures along the Sonoma coast are generally cool. On the 30-acre ridgetop that is the Littorai Wines Estate, it is chilly and foggy when I meet with winemaker Ted Lemon. In a new straw bale winery, Lemon makes wine from Chardonnay and Pinot noir grapes that originated in Burgundy. I’d place Lemon at the leftmost end of the terroirist spectrum. Even he sometimes uses sulfur dioxide, but his vineyards are managed biodynamically—and that is where things get interesting.

Biodynamics is a set of farming principles originally defined by the 19th-century esotericist Rudolf Steiner. Lemon is glad to explain Steiner’s spiritual approach. But he can just as easily tie biodynamics to the ideas of University of California, Berkeley, agroecologist Miguel Altieri, whose concern is creating agricultural systems that are both productive and sustainable.

The ideal biodynamic farm is a diverse, closed biological system. On the Littorai Wines Estate, nearly everything used in the vineyard originates on the estate. Lemon makes fertilizer from a compost of farm and winery waste and manure from a neighbor’s farm. He cultivates wild, highly pollinating orchard mason bees to encourage plant life. In the vineyard, Lemon seeds the ground alongside every tenth row with native wildflowers, giving his vines a “polycultural” ground cover. Much of the acreage is devoted to woods and pasture and to gardens growing legumes and cereals. All of these, according to Lemon, inform his wines’ terroir.

After Lemon and I tour the grounds, he pours wine and I wonder how I could possibly discern whether his wine genuinely reflects its vineyard’s diversity. As much as I may have learned about the science and practice of wine making in two days of tasting, I know my palette remains shy of sophisticated. He offers me a glass. I almost demur, afraid I might offend. But . . . I do like a good Chardonnay. As puffs of fog blow past the winery window and the sun momentarily breaks through clouds, I take a sip. You know, for the life of me, I swear I am tasting the raw, wild essence of California.

Sipping the Science Behind Wine Country

SMELL-0-VISION technology is one of the main attractions at the St. Supéry Winery in Rutherford. The winery’s tasting room is lovely and the pouring staff well-informed, but it’s the scent simulators capping the self-guided tour that linger in the mind. Vaguely reminiscent of peep-show technology, Smell-O-Vision involves pushing levers to have wine scents blasted into your face through glass tubes. All right, it’s silly. But instructional cards on the gizmo itself turn the experience into an on-the-cheap and surprisingly effective lesson about wine and “nose.” stsupery.com (707) 963-4507

FROG’S LEAP winery produces its award-winning wines using electricity from solar panels, heat and cooling from a geothermal system, and grapes grown organically without irrigation. Book a tour for $20 a person to learn winemaker John Williams’s traditional farming techniques, then cap off the visit with a few samples in the tasting room. frogsleap.com (707) 963-4704

SKYLINE WILDERNESS PARK is one of the few places where you can enjoy the outdoors amid all the privately owned vineyards and estates dotting Napa’s beautiful countryside. The microclimates that give rise to fine wine cover a wide array of landscapes along the park’s 25 miles of trails, including grasslands, dense oak forests, and fern-fringed creeks. Admission is $5 per car. skylinepark.org (707) 252-0481