The bumps on a humpback's flipper prevent the beast from stalling as it turns. 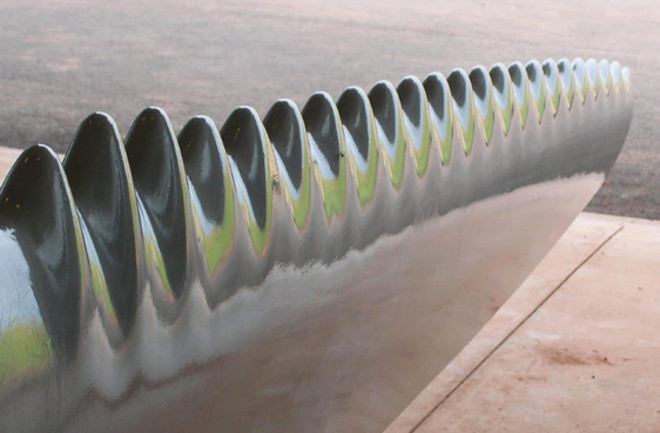 For all its merits as an everlasting, carbon-free source of energy, wind has its drawbacks. There are hefty up-front installation costs associated with wind turbines, and these turbines run intermittently and sporadically. Compounding the natural variability of the wind itself is the often-overlooked problem of stall. When particularly strong or slow winds flow over angled blades, the blades can lose lift and stop rotating. This phenomenon is akin to holding your hand out the window of a moving car: Tilt your palm up and you create lift, which pulls your hand skyward. Tilt too aggressively and your hand drops (a type of stalling).

One company believes it has found an answer to these problems by mimicking the fin of the humpback whale. Humpbacks tilt their uniquely scalloped pectoral flippers aggressively for extra lift in the water, turning their immense bodies swiftly to catch fast, elusive prey. The trick is in the tubercles, or bumps, along the flippers, says Frank Fish, president of the company WhalePower. These bumps allow the fins to tilt further without stall by changing the way water flows over them. Fish, who is also a professor of biomechanics at West Chester University in Pennsylvania, says a humpback turning without tubercles would resemble a car slipping on an icy turn: “Instead of being able to make a tight turn, if its flippers stalled the whale would go out of the turn.”

Wind tunnel tests published by Fish and by Duke University fluid dynamics expert Laurens Howle in 2004 showed that adding tubercle-like bumps to model fins pushed back the stall angle by as much as 40 percent. Other researchers have since confirmed that airfoils with bumps stall more gradually, though debate remains over the exact process that makes this happen.

Industry is not waiting for the final verdict. By October, the Canadian industrial fan maker Envira-North Systems expects to begin producing the first tubercle-inspired product—wavy blades for ceiling fans up to 24 feet in diameter. The next step will be to prove the technology at wind-turbine scale, with blades that can have diameters of up to 400 feet.

Since last August the Wind Energy Institute of Canada on Prince Edward Island has been testing a turbine with blades retrofitted by WhalePower—which is precisely what the company needs to demonstrate its technology can work, says Robert Thresher, director of the U.S. Department of Energy’s National Wind Technology Center. Thresher doubts that WhalePower blades can markedly reduce the intermittency of wind power—a challenge for power grid controllers accustomed to smoother power sources—but he says even a 1 or 2 percent increase in power output could be financially attractive.