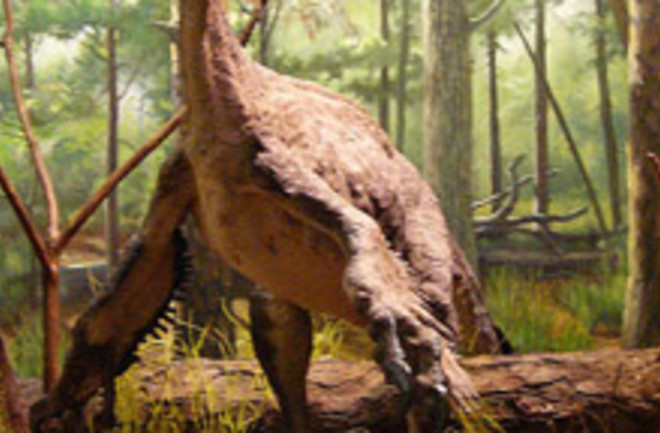 Is it a “chickenosaurus,” or a “dinochicken?” Famed paleontologist Jack Horner says that if you want to grow a dinosaur, you have to start with a chicken egg. As descendants of dinos, chickens carry some of the same DNA. So if chicken embryos have their genes reversed-engineered for every trait that they share with dinosaurs— like long tails, teeth, and three-fingered hands— you can grow living animals with dinosaur traits. Previously, paleontologists thought they would be able to extract DNA from amber and then use it to clone dinosaurs, just as Michael Crichton detailed in his novel. But the real life experiments repeatedly failed and the idea appears to be possible only in fiction. Horner (who was an inspiration for the character Dr. Alan Grant) thinks “the better route is to start with a descendant and work backwards. By taking a bird and manipulating four or five of its genes, you can grow a long tail instead of wings.” Then you can manipulate other traits to produce a complete dinosaur. In an excerpt from Horner’s book How To Build A Dinosaur (on newsstands now), he writes about Hans Larsson at McGill University, who is making chickens grow tails by tweaking their genes and altering their embryos. Larsson thinks that by injecting and manipulating the genes throughout embryo development, the chicken would not only grow a tail, but also the feathers, wings, and teeth that could develop to look like a dinosaur. “I do think I’ll see a dinosaur in my lifetime,” says Horner. Until then, stay tuned! Or just rent one of the movies. Related Content:80beats: Fluffy Dinos Attract MatesDISCOVER: Dino Hunter80beats: Tiny Skulls and Vegetarianism