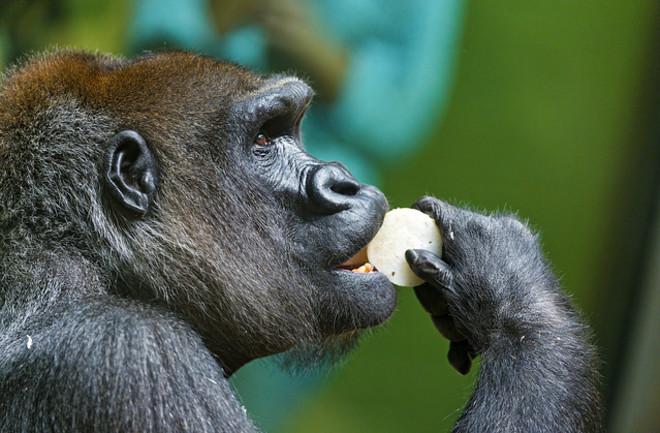 By now, it’s becoming pretty clear that non-human primates are pretty musical: Gorillas have been shown to have individual tastes in music, and chimpanzees are pretty good drummers. In this study, the researchers observed wild gorillas in the Republic of Congo. They found that the gorillas produce certain vocalizations, which the researchers call “singing” or “humming”, only when they are eating certain foods. The authors speculate that the calls could help coordinate group behaviors… but we prefer to believe that this is the gorilla version of “om nom nom”. Wondering what gorilla humming sounds like? Check out the clips below!

Food-Associated Calling in Gorillas (Gorilla g. gorilla) in the Wild

“Many nonhuman primates produce food-associated vocalizations upon encountering or ingesting particular food. Concerning the great apes, only food-associated vocalizations of chimpanzees (Pan troglodytes) and bonobos (Pan paniscus) have been studied in detail, providing evidence that these vocalizations can be produced flexibly in relation to a variety of factors, such as the quantity and quality of food and/or the type of audience. Only anecdotal evidence exists of eastern (Gorilla beringei) and western gorillas (Gorilla gorilla) producing food-associated vocalizations, termed singing or humming. To enable a better understanding of the context in which these calls are produced, we investigated and compared the vocal behavior of two free-ranging groups of western lowland gorillas (Gorilla g. gorilla) at Mondika, Republic of Congo. Our results show that (a) food-associated call production occurs only during feeding and not in other contexts; (b) calling is not uniformly distributed across age and sex classes; (c) calls are only produced during feeding on specific foods; and (d) normally just one individual gives calls during group feeding sessions, however, certain food types elicit simultaneous calling of two or more individuals. Our findings provide new insight into the vocal abilities of gorillas but also carry larger implications for questions concerning vocal variability among the great apes. Food-associated calls of nonhuman primates have been shown to be flexible in terms of when they are used and who they are directed at, making them interesting vocalizations from the viewpoint of language evolution. Food-associated vocalizations in great apes can offer new opportunities to investigate the phylogenetic development of vocal communication within the primate lineage and can possibly contribute novel insights into the origins of human language.”

Related content: Gorillas, like people, have individual tastes in music. That ape’s got rhythm! Chimpanzees play drums just like humans (with music goodness). Dogs recognize the emotions of other dogs as well as humans.