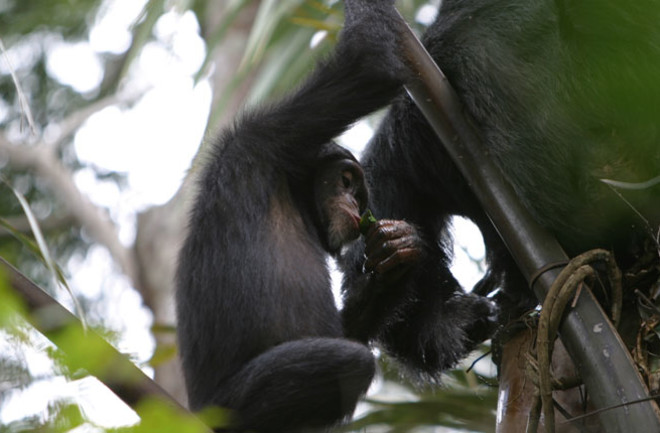 A chimp drinks fermented palm sap from a leaf in Guinea. Credit: G. Ohashi Alcohol consumption by humans exists in almost every known society, but until now, it’s never been conclusively documented among other primates. But it turns out that chimps have a taste for alcohol too: Wild chimpanzees in Guinea have been observed drinking fermented tree sap on multiple occasions.

The raffia palms that grow around Bossou, Guinea, produce a sweet sap whose natural sugars ferment quickly in the tropical heat, yielding a sweet, mildly alcoholic drink that the local people harvest. However, anthropologists noted that humans weren’t the only ones imbibing. While the elevated sap bucket was left unattended during afternoons researchers documented occasional chimp visitors to the alcoholic drink. And in fact, the chimps devised a tool to help them steal the sap. In groups, they climb to the crown of the palm and take turns dipping folded leaves into the bucket to soak up the sap, just like they use similar tools to soak up water. The average chimpanzee drank about a liter of sap per sitting, according to the paper published today in the journal Royal Society Open Science. Raffia sap has about 3.1 percent ethanol by volume, so that’s about like drinking two pints of fairly weak beer. Of course, male chimps weight about 150 pounds at their largest, so they may be lightweights compared to some human drinkers. And some chimps could drink quite a bit more than average in a given drinking session. “Some of the chimpanzees at Bossou consumed significant quantities of ethanol and displayed behavioral signs of inebriation,” wrote the paper’s authors, who didn’t take detailed notes on the chimpanzees’ behavior before and after drinking, but noticed, “Some drinkers rested directly after imbibing fermented sap.”

Drinking sessions are a rare treat for the chimpanzees of Bossou, partly because raffia palms are fairly scarce in the chimpanzee’s home range. In 17 years of observations, Hockings and her colleagues observed just 20 drinking sessions. But it’s still the first well-documented example of primates, other than humans, consuming alcohol. Other researchers’ observations have implicated other primates as well: In southeast Asia, the slow loris eats fermented Bertram palm nectar, while on the island of St. Kitts, green monkeys steal sips of tourists’ cocktails. But neither of these behaviors has been studied in detail. For that matter, there’s still much to learn about the Bossou chimpanzees. For instance, it’s not clear whether they drink palm wine for its intoxicating effect or because they enjoy the sweet flavor of the sap. Raffia palm sap is rich in vitamins and minerals, and its high sugar content makes it a great energy source for the chimpanzees; the fact that it’s alcoholic may be irrelevant. Hockings says the answer may lie in an experimental trial, which would give chimpanzees access to both fermenting and non-fermenting sap. But such trials would have to be done carefully, under strict ethical guidelines, so as not to provide wild primates with a source of ethanol not naturally available in their habitat.

Among humans, alcohol use is ubiquitous. Alcoholic beverages have turned up in every human culture with access to fermentable materials – and most cultures have been very resourceful when it comes to finding things to ferment. Both humans and our closest relatives, including chimpanzees, produce an enzyme called alcohol dehydrogenase 4 (ADH4), which helps metabolize ethanol more efficiently. But why would the ability to drink give apes an evolutionary edge? One hypothesis is that it allows chimps to eat naturally fermented fruits. The ADH4 mutation showed up about 10 million years ago, around the same time that anthropologists think early human ancestors began spending more time on the ground than in the trees. Living on the ground made apes much more likely to find dropped fruit, which is often overripe or even rotten – full of ethanol, in other words. Apes who could metabolize the alcohol could still use that dropped fruit as a food source. Anthropologists call this the “Drunken Monkey Hypothesis,” but despite being the most amusingly-named theory in anthropology, there’s not yet much behavioral evidence for or against it. Modern apes rarely pick up and eat fruit that has already fallen to the ground, although chimpanzees in some areas do gather dropped breadfruit. In fact, most primates rarely eat overripe fruit, and they certainly don’t seem to prefer it, according to a 2004 study. But Hockings’ findings indicate that ethanol doesn’t keep chimpanzees from seeking out a food source. More research could provide further evidence that the human affinity for alcohol reaches far back in our lineage.