Wild Chimpanzees Have Family Drama Too 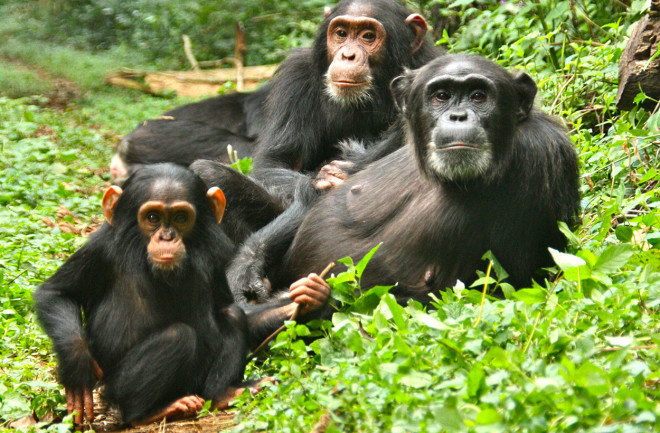 The contact patterns of chimpanzees in the Kanyawara community of Uganda’s Kibale National Park are being analyzed to learn how diseases travel. The interactions between adult and juvenile chimps can often resemble human behaviors. | Julie Rushmore/University of Georgia

We often hear about diseases that jump from animals to humans. But as human contact with wildlife becomes more frequent and people continue to encroach on habitat, wild animals are being exposed to human pathogens more than ever. For the great ape, whose populations are already endangered, diseases such as measles can have a devastating effect.

To help wildlife officials with vaccine efforts and management of epidemics, ecologist Julie Rushmore of the University of Georgia studies social behavior among great apes in Uganda. By applying social network analysis — the mathematical theory behind Facebook that explains how different individuals are connected — Rushmore found that high-ranking mothers and their juveniles (as well as high-ranking males) were most likely to transmit diseases to other chimps because everyone in the community wants to be with them.

Knowing which chimp is most at risk makes ape vaccination campaigns more successful because it minimizes the number of individual immunizations necessary to prevent an epidemic. During her observations, though, Rushmore saw firsthand some of the other unwanted side effects that can accompany ape popularity.

In Her Own Words:

One day I followed an adult female chimpanzee that has five kids. That’s a lot for a chimp! An adult male in the community attempted to sneak her and her family away so that he would have exclusive access to mate with her. But the female seemed incredibly resistant to the idea of leaving the community.

While the female stalled, her children were eager to hang out with the high-ranking male. Her young son watched his every action and followed him continually. After a while, they all went to the periphery of the community’s range. For two hours, everyone ate and played together. Then suddenly, the female was nowhere to be found.

Her kids began running back through the forest, screaming loudly. The male followed, displaying aggressively — banging on trees and making loud vocalizations. Eventually, the male gave up and left. Once he was gone, the mom reappeared, the kids stopped screaming and the family traveled back to the central area. Several hours later, the same male found them there and attacked the female. Then it started all over again. Eventually they reached a feeding patch and spent the day there.

At day’s end, several other families arrived at the feeding patch, and everyone started traveling back to the central area together. While the high-ranking male was walking back with everyone, the female slipped away with her kids without anyone noticing. They were quick and quiet. In the distance, I could hear the male crying out. I suspect he realized she’d sneaked away again.

[This article originally appeared in print as "Ape Escape."]