Wild Chickens Rule the Streets in Some Beach Towns. Here's Why One Scientist Is Studying Them

There’s a man who loves chickens almost as much as he loves science. He’s probing the depths of evolutionary biology, genetics and the unexpected benefits of feral birds. 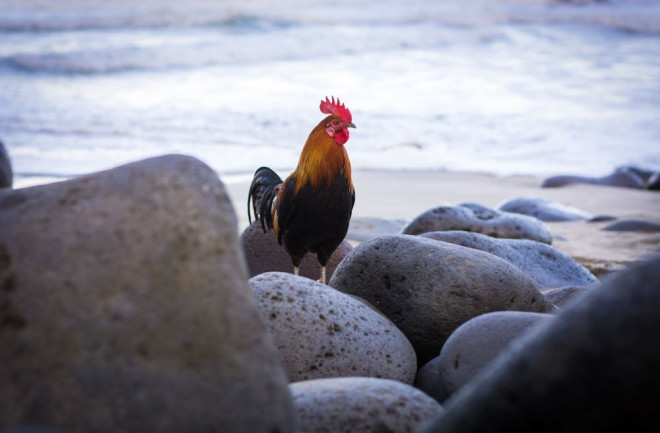 This article appeared in the November 2020 issue of Discover magazine as "Where the Wild Things Crow." Subscribe for more stories like these.

If you’ve ever hit the beaches of Key West, Bermuda or Hawaii looking for a tranquil vacation, you may have experienced a rude awakening. By a rooster, that is.

These tourist-laden seaside towns are full of feral chickens. They roam the graveyards. They strut the beaches. They peck at leftovers beneath busy tables on restaurant patios. Legends about the birds abound, including that one flock arrived on the wings of a Pan Am jet and that some were bred to have extra toes. But are they good for anything besides waking us up?

Eben Gering thinks so. He’s been chasing free-roaming fowl around beaches across the globe for almost a decade. An assistant professor of biology at Nova Southeastern University in south Florida, Gering is convinced that these birds hold answers to core questions about gene evolution and disease resistance. Though he tracks many wild animals that hold scientific secrets, feral chickens are his favorite.

Q: There are so many animals in the world; how did you end up focusing on chickens?

A: From a practical perspective, they’re easy to watch. They don’t fly great distances, and they’ll perform all kinds of interesting behaviors right in front of you. So, we’re able to get data on chickens that would be much harder to get if we were studying other kinds of organisms. We’re even able to use geo-referenced photographs of chickens that people post on their social media while on vacation to track things like when the hens have chicks and the prevalence of genetic traits like yellow legs.

Q: And why feral chickens?

A: In biology right now, we have some really interesting research on evolution that’s done under really artificial conditions, like people looking at the evolution of bacteria in vials. And then we have some researchers that go deep into the Amazon rainforest, or Papua New Guinea, to look at how organisms are evolving in these much more complex and fluctuating conditions.

But I’m fascinated by these feral organisms because they seem to live in the margins between those two extremes. So, on the one hand, they are subject to a complex environment where they’re interacting with lots of other organisms. They deal with weather and competitors and predators and all that complicated stuff that we don’t see in lab settings. But, on the other hand, they also start from a point of human influence, because their genomes have been modified by the domestication process.

Q: About how many chickens are we talking here, that live in these beach towns?

A: Fun fact: Between August 2012 and October 2013, the tiny archipelago of Bermuda removed something like 11,500 chickens. [The government of Bermuda estimates its current feral chicken population to be between 20,000 and 25,000 across the territory’s mere 20.5 square miles.]

Q: That’s a lot of chickens. Where on Earth did all these birds come from?

A: A lot of them were introduced over time from trading ships. But there’s this amazing story about this person who really wanted to introduce red junglefowl as game birds to the U.S. from India. I think the story is that this person from India held this huge party, and got all the birds in this courtyard, and brought all these airline agents to convince them they should get a Pan Am jet and fill it up with junglefowl to bring to the U.S. as game birds. I believe these junglefowl introductions were the last time that the U.S. Fish and Wildlife Service tried to import a terrestrial vertebrate into the wild for people to chase around with guns. This practice has fallen out of favor because so many species that were imported intentionally have become invasive.

The closest living relative of the Tyrannosaurus rex is none other than Galllus gallus — the chicken. (Credit: Cheri Alguire/Shutterstock)

Q: Do the people who live in these areas now get annoyed having so many chickens around?

A: It depends. In Ybor City, Florida, there’s a chicken society and a guy who takes care of the birds. He knows every individual chicken, and which one had babies with which one. He runs all this social media stuff and sells shirts. If a chicken has babies, they have a social media update. But there’s conflict within the local business community.

Some people see the chickens as a way to make people come visit. Other people just see them as things that poop on their cars.

Q: Do people eat them?

A: Well, in Hawaii, they say that the recipe for cooking a feral chicken is “put a rock and the chicken into water and boil it for two days. Then eat the rock.” So, most people would not want to eat one. They wouldn’t like the flavor or the toughness. But some feral birds fetch a high price in Asian markets; people eat them there. I haven’t been lucky enough to try it.

The Gates Foundation is really interested in chickens as a resource that empowers women in parts of Africa. It’s a lot easier for women to give each other chickens than, you know, a cow. Then if somebody has a crop failure, they can kill one of the chickens and it’s a good source of protein. Q: What are some benefits of letting these chickens continue to roam in the U.S.?

A: It’s possible that by studying feral chickens, we could find microbes that can be used as probiotics to keep chickens in agriculture settings healthier without relying on antibiotics. Compared to other meat sources, chickens have a small carbon footprint. So if we can make poultry farming more successful and healthier, maybe we can reduce the carbon footprint of livestock production overall.

There also might be a lot we can learn about the genetic basis of behavioral variation, including behavioral disorders, by studying these tractable animals and how they respond to dramatic changes in their social environment as they go feral. Q: Have you come across any totally unexpected results in your research?

A: My favorite finding so far is we caught several chickens in Bermuda that had extra toes. I learned afterward from some poultry breeders there that there are different breeds that have an extra toe. And some researchers have looked at what genes affect this trait, which is called polydactyly. Turns out this used to be pretty popular in chickens bred in the Atlantic region but has fallen out of fashion. So I’ve entertained the idea that these feral populations contain some mutations that have been lost as different domesticated breeds went out of fashion. Finding this trait in the feral chickens was unexpected. Q: I want to know how you catch feral chickens so you can study them. I’m envisioning you training like Rocky Balboa to catch the flighty birds. Accurate?

A: I usually trap chickens with a spring-loaded net that’s deployed by manually pulling a very long string after a long period of waiting for birds to step into a corn-baited trap zone. These animals are very wary of unfamiliar objects, so I miss most of the shots I take. The process resembles Sylvester and Tweety more so than Rocky Balboa. Q: What do you say to people who might not be that interested in chickens? Do you have a way of winning them over?

A: I like to tell people to think about the dog and the wolf — same species, but one has been domesticated. Same thing with backyard chickens and the red junglefowl. So, which traits are the more wolflike or junglefowl-like traits, and which traits are somewhere in between? And where in the genome is that domestication process controlled? Just like with wolves and dogs, the junglefowl and the domesticated chicken have very different behaviors that relate to genetic variation and variation in the brain. I just think chickens are a great tool for asking all these really neat questions.

Joan Meiners is a freelance writer and ecologist based in Utah. Connect with her on Twitter @beecycles.