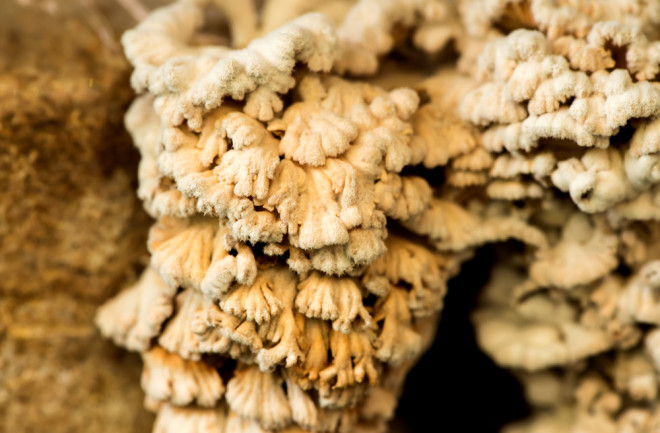 Every Schizophyllum commune you see is likely a new sex. (Credit: wasanajai/Shutterstock)

Where we have two traditionally recognized genders, male and female, some species of fungi can have thousands of sexes. It sounds confusing, but it’s actually helpful — with so many variations, the fungi can mate with nearly every individual of their species they meet. It must make for a wild singles night.

One species of fungi, Schizophyllum commune, really shines when it comes to gender diversity. The white, fan-shaped mushroom has more than 23,000 different sexual identities, a result of widespread differentiation in the genetic locations that govern its sexual behavior. For humans, and all animals, really, this would never fly, because we’ve evolved a very specific method of reproduction that involves specialized sexual organs to do the mating with and sex cells to carry the genetic information.

Fungi, by contrast, keep it casual. To mate, all a fungus has to do is bump up against another member of its species and let their cells fuse together. S. commune uses a special kind of structure called a clamp connection to do this, and it allows them to exchange their cell’s nuclei, along with the genetic information inside. This keeps reproduction simple and means that a potentially huge number of sexes is possible — other fungi species have dozens or more, though S. commune is certainly an outlier.

It’s Not What You Think

The “sexes” don’t really involve physical differences either, as we might think of when the word “sex” comes to mind. The variations are all in the genome, at two separate loci, or locations, each of which has two alleles, or alternate forms. The loci are called A and B and the alleles are termed “alpha” and “beta.” That makes four possible sexes, but there’s another twist. Every A-alpha/beta and B-alpha/beta can have many different variants, called specificities. It amounts to more than 339 specificities for A and 64 for B. Putting those two together yields thousands of possible unique sexes.

The fungus can mate with any specificity as long as it’s different somewhere on both A and B. So, two prospective mates could both have the same A-beta and B-alpha, but have different A-alphas and B-betas and they’d be fine to hook up. If they shared A-alpha and A-beta, though, their pheromones wouldn’t be compatible, meaning that they couldn’t carry out the reproductive process. That leaves a ton of options for mating, though, and essentially means that anyone a fungus meets is fair game for sexy time.

It also really helps spread genetic diversity around, because there are so many options. Think about that next time you’re looking for a date.