Why the Planets Align: Life Inside Two Differentially Rotating Disks 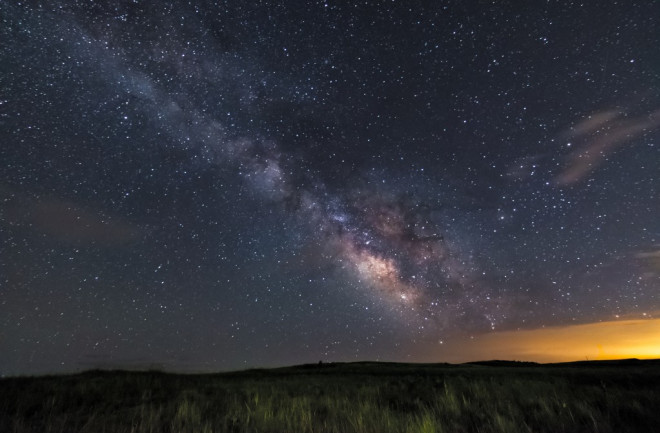 The Milky Way as seen from Colorado. (Credit: Joel Tonyan/Flickr) January was a good month for the planets. Scientists reported theoretical evidence for “Planet 9” and the alignment of Mercury, Venus, Saturn, Mars and Jupiter in the morning sky encouraged many people to wake up extra early to see the show. As you likely know, these planetary alignments occur because the solar system is largely shaped like a flattened disk with the ecliptic being the plane that holds Earth’s orbit around the sun. The orbit of Mercury is inclined 7 degrees relative to the ecliptic, more than twice the inclination of any other planet. That small range of orbital inclinations relative to the ecliptic means that any time it's viewed edge-on, the range of the planets would be very small in the direction perpendicular to Earth's orbit.

From now until about Feb. 20, early risers will stand a chance to see five planets in the pre-dawn sky. (Credit: NASA/CalTech)

One of the first activities we do in any introductory astronomy course I teach is plot the positions of all the planets (along with the moon and some minor planets) for that day on a constellation chart. When you stand inside a narrow disk and look out through the “long” dimension you see a band, in this case a band projected on the inside of the celestial sphere. The planets must fall within this band and any time we plot their positions they lie in a narrow strip that follows the ecliptic. They can also, then, align in the sky, as we see currently. Pluto is in there too, by the way, very close to Mercury. Because everybody is in motion here and this disk is not solid, everything appears to be moving relative to everything else. Watch for the moon to slide through this grouping as it wanes during the first week of February. Mars being nearer to both us and the sun will catch and pass Saturn. It will try to get the job done this spring but won’t make it. Mars will continue to close on Saturn until about mid-April when the earth catches up and begins to pass these outer planets in their orbits. At this time Mars and Saturn will begin retrograde motion to the west against the stars, Mars pulling back away from Saturn. Eventually, Mars and Saturn will renew their forward motion and the pass will occur about around Aug. 23 very near the bright star Antares in Scorpius. It’s definitely worth keeping an eye on this dance all year.

The other great disk we live inside is the plane of the Milky Way Galaxy. As promised, it appears as a narrow band on the sky. Once again everything is motion, but this motion is harder to detect, largely because the stars are so far from us. We are orbiting the Milky Way’s center, completing a circuit about every 235 million years, bobbing up and down 10 or 11 times each orbit. Right now, observers at mid-northern latitudes can see the anti-center of our Milky Way Galaxy high in the evening sky, lying near the Auriga/Taurus border, not far from Gemini.

Wander out some evening and look at the glittering stars of these constellations and you have your back to the Milky Way’s center in Sagittarius. Picture yourself riding a merry-go-round facing outward, looking at the thin part of the Milky Way’s disk. We expect material out near the edge of the galaxy, far from the dense galactic center, to be moving more slowly in its orbit as distance from the center increases, but that is not the case. In fact, looking out toward the galactic edge in Auriga we run out of material to observe before we see any decrease in orbital velocity. The anti-center itself is only about 4 degrees west of the star El Nath, which resides almost directly on the Taurus/Auriga border below bright star Capella. The region is crowded with open star clusters, sure markers of the galactic disk in which we live. M35, M36, M37 and M38 form a ragged line that passes just above the anti-center as it runs from Gemini into Auriga.

A map of the Milky Way oriented relative to the sun's position. (Credit: NASA/Adler/U. Chicago/Wesleyan/JPL-Caltech) The band defined by the solar system and the band defined by the Milky Way are inclined to one another. We see them cross at two places in our sky. One of these crossings occurs in the Gemini/Taurus region near the direction of the galactic anti-center we see in our current evening sky. The other is in the area of Sagittarius and Scorpius. As you watch Mars pass Saturn in August you will be looking in the longest direction of disk – toward the center, a region of sky full of stars, clusters and nebulae. Each morning I step outside to appreciate the evolving planetary alignment. Each evening I step outside to appreciate the view looking out and away from the galactic center. There will be future planetary alignments and the galactic center and anti-center slide by every year. Each passing of these is magnificent and makes a slightly novel impression on me.