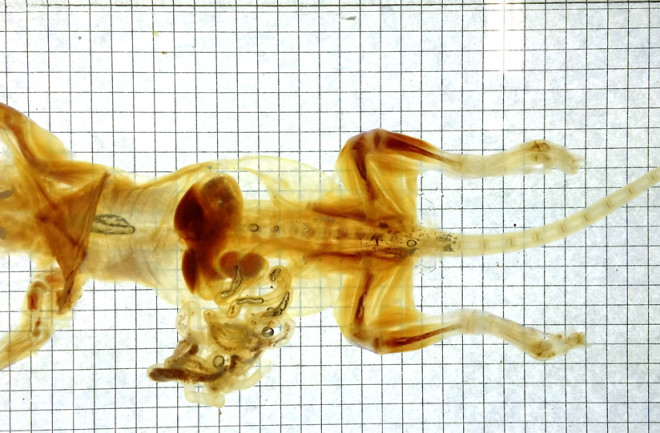 A whole rat made transparent with uDISCO (Credit: Ali Ertuerk) When Victorian anatomists wanted to take a peek under the skin, they were forced to cut into the very objects they meant to study. It was really their only option, of course, as techniques such as X-rays and MRIs wouldn't enter the lab for many years. Today, scientists can see into bodies without ever opening them up, but their visualizations still fail to completely capture their subjects' inner essence. The stubborn opacity of skin and organs defeats our eyes. To give us an altogether new form of insight, researchers are making the bodies we want to peer into entirely transparent. The idea of leaching the color from organic structures has existed for several years now, but researchers from Germany say that they have created the most effective method to date. And, not only are these mice transparent, they glow in the dark as well. The technique also shrinks the mice down to about a third of their former volume, leaving the researchers with a tiny, see-through mouse that glows radioactive green.

How to See Through A Mouse

To make a transparent mouse, the researchers first remove the skin. They then begin injecting and bathing the animal with a series of chemicals, including a dehydrating agent and an organic solvent. This process takes several days to work its magic, as it gradually removes water and lipids from the mouse's cells. The dehydration process is what causes the mouse to shrink, while removing the lipids serves to render the mouse transparent. The end result is a mouse with its internal structures—even the bones—completely intact and almost entirely visible to the naked eye. By staining organ systems of interest with fluorescent proteins, the researchers can create a highly visible road map of various structures within the mouse, such as veins, or neurons in the brain and spinal cord. They published their work Monday in Nature Methods.

A mouse brain stained fluorescent green and made transparent with uDISCO. (Credit: Ali Ertuerk) The researchers call their method uDISCO, short for ultimate 3-dimensional imaging of solvent-cleared organs. The technique builds on the 3DISCO method developed by some of the same researchers, which yielded transparent mice, but failed to preserve the fluorescent proteins necessary for researchers to clearly see inside the body.

As a proof-of-concept, the researchers stained neurons inside of a mouse brain with a fluorescent dye and applied the uDISCO technique. They were left with a brilliant map of the central nervous system that let them see the myriad connections and pathways that run from the brain to the spinal cord. The same process could be used on veins and other organs to pick them out and check for damage or simply better understand how they work. A test with a small piece of human tissue also worked, opening the door to studying transparent human organs. Potential applications for the technique include stem cell research, where it is important to track where the stem cells go after they have been implanted. Combining fluorescent staining with see-through tissues would cause cells in question to stand out clearly no matter where they go. The uDISCO technique could also help neurologists see how neurons are laid out and connected without having to dismantle the brain.