Why Old Dads Are Bad for Albatrosses 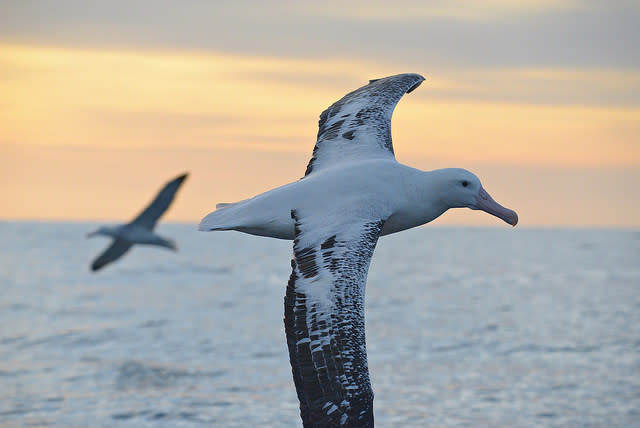 If birds fretted about their biological clocks like humans do, it would be the dads of some species doing the worrying, not the moms. When male albatrosses have chicks later in life, those chicks grow up to fare worse. It's because albatrosses of both sexes are such good parents to begin with. Wandering albatrosses (Diomedea exulans) share parenting duties "quite equitably," explains Rémi Fay, a graduate student in biology at France's CNRS. The giant seabirds mate for life. Every other year, couples lay a single egg and incubate it. After a chick hatches, the mom and dad share responsibility for keeping it alive. But males are much bigger and heavier, Fay says, which means the parents' contributions aren't exactly the same. Fathers can patrol the best fishing spots at sea, outcompeting any female birds that are nearby, and can carry more food back to the nest. This means the father's role in feeding the chick outweighs the mother's. Fay and his coauthors studied long-term data from Possession Island in the Indian Ocean to find out how this role imbalance affects chicks as their parents age. Scientists have been capturing, banding, and re-releasing wandering albatrosses in this colony since 1960. That means they've followed entire family histories in depth. The birds can live for decades; after they grow up and fly away from the nest, young albatrosses return to the colony in 2 to 7 years. The data included life histories of thousands of chicks with parents of known ages. Fay looked at how well these chicks fared as adults: did they survive for more than 2 years after leaving the nest? Did they lay their own eggs and hatch grand-chicks? The age of albatross fathers mattered, the researchers saw. Dads in the study ranged from 6 to 41 years old, and had an average of about 4 chicks. Chicks born to older dads were less likely to survive. But their mothers' ages didn't matter. Fay says that as male albatrosses age, they don't forage for fish as efficiently. They probably can't carry as much food back to their nests as they did when they were younger and stronger. So it's likely that "the chicks start their life with a disadvantage," Fay says. In the long term, that may mean a greater chance of dying. Aging is complicated, so this may not be the only way older albatross dads disadvantage their young, Fay adds. For example, there could be a genetic factor—maybe something to do with a dad's telomeres, the tags on the ends of animal chromosomes that shorten with age. His study only looked at one ecological angle of the story. But, he says, the same old-dad effect might show up in other animals too. "In birds, most of the species show both maternal and paternal care," he says, which means "other species may show this pattern." Human dads, though—unless their parenting duties include flying to sea and hauling back fish for their babies—should probably not read too much into it.