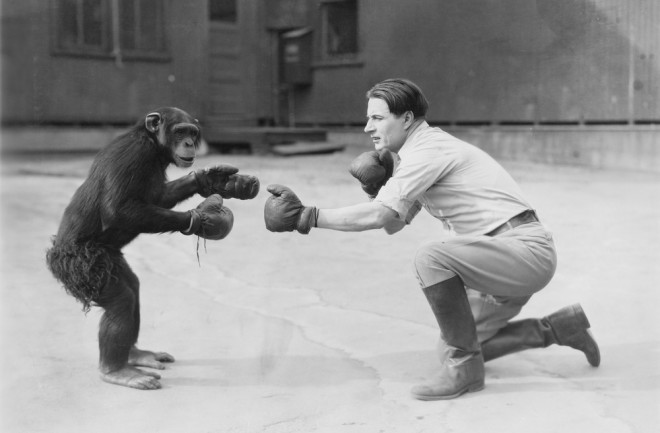 (Credit: Everett Collection/Shutterstock) Humans are sort of nature's wimps. Relatively speaking, our physical prowess just doesn't match up to the rest of the animal kingdom. Our lack of brawn is a result of our our big, energy-hungry brains, an adaption that seems to have worked out pretty well, all things considered. Still, without the aid of tools and traps, creatures who call the wilderness home present a clear threat. Even when compared to our closest cousins, chimpanzees, the strength gap is obvious. When a human is attacked by a chimp, you'll see reports claiming the primates are anywhere from two to eight times as strong as a human, despite their small stature. These estimates are likely based on experiments from the 1920s, when a researcher by the name of John Bauman recorded a chimp at the Bronx Zoo pulling 847 pounds with just one hand. A new study from researchers at the University of Arizona and Ohio State University took a different approach to the problem: They performed direct tests of both human and chimp muscle fibers, and used computer models to determine how strong chimps really are. Or, put another way, researchers wanted to know why humans are so weak.

Do You Even Lift?

Their study, published Monday in the Proceedings of the National Academy of Sciences, indicates our common conceptions of primate strength may be blown slightly out of proportion. Their computer model found that chimps are only 1.35 times stronger than a human on average, a number that agrees with more recent lab tests pegging them at 1.5 times as powerful. Direct tests of muscle fibers actually found many similarities between our cells and theirs. In terms of static strength and contraction speed, human muscle fibers kept pace with chimp muscles. Chimp and human muscles fundamentally work the same, they say, with filaments of actin sliding past thick myosin bands to produce contractions. Where we differ, however, is in the type of fibers that together make up our skeletal muscles.

Humans tend to favor a type of muscle fiber called MHC I that allows for greater endurance and reduced energy consumption, but at the cost of raw strength. Chimpanzee muscles, on the other hand, are more evenly balanced with less efficient but powerful MHC II muscle fibers; they're the kind that come in handy when swinging from tree to tree in the forest. Chimp muscle fibers are longer than ours too, and the net result is that, pound-for-pound, their muscles are more powerful. These two factors likely explain much of the human-chimp strength gap, but other factors such as joint mechanics and muscle-tendon interactions play a role as well, with chimp arms better suited for the hanging and grabbing movements that they do every day. We weren't always this way. The researchers think we began getting weaker roughly 8 million years ago, when our lineage diverged from chimpanzees. The Homo genus began developing larger brains that sucked energy away from muscles and selected for more economical muscle fibers. As we became bipedal, muscles primed for endurance would have also won out as our ancestors began walking long distances on their migrations across the globe. It was these factors — brains and legs — that played a major role in humans' eventual global dominion. Evolutionarily speaking, the wimps won after all.