Why Humans Lost Their Hair and Became Naked and Sweaty

Chimps aren't naked OR sweaty, so why are we? 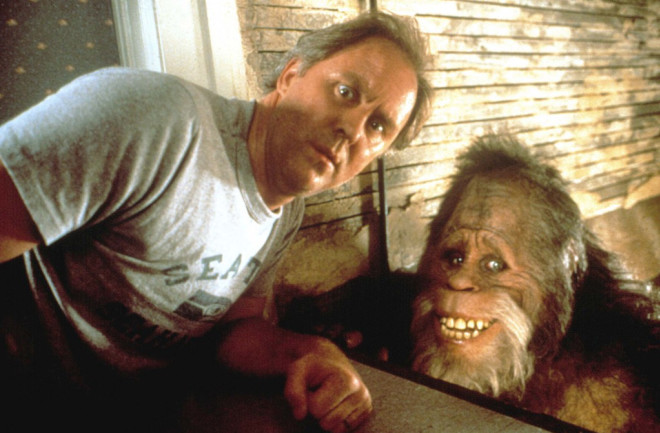 Actor John Lithgow with Kevin Peter Hall as Harry in the 1987 movie Harry and the Hendersons. (Credit: Everett Collection)

What makes humans stand out among primates?

Yes, we’re also distinguished by upright walking, big brains and advanced culture. But here I want to focus on our sweaty bare bods.

Millions of years back our ancestors were likely as hairy as chimpanzees and gorillas. Over the course of human evolution, our lineage traded its fur coat for a covering of minuscule body hairs and a few ample patches over the head, armpits and nether region.

Why we became furless has long fascinated scientists, who have proposed a number of explanations. Darwin suggested it was due to sexual selection, that our ancestors preferred less-hairy mates. Others have argued fur loss helped deter hair-dwelling parasites like lice.

But the majority of researchers today posit that reduced body hair had to do with thermoregulation — specifically, with keeping cool. The core argument is: During some evolutionary phase after our ancestors became bipeds, they were regularly walking or running in open, drier habitats. Imagine a patchy woodland or savanna, rather than a dense, shady rainforest. In such a context, overheating was a serious risk. Reduced body hair and increased sweat glands were favored because this allowed for more effective evaporative cooling via perspiration.

In other words, exposed to sunnier conditions, those better at sweating — characterized by less fur and more sweat glands — were more likely to survive and reproduce. Over many generations, these traits became permanent fixtures of the human lineage.

Just How Naked Are We?

“You don’t have to be a biologist to look at a human and look at a chimpanzee and realize that our skin looks different,” says evolutionary geneticist Yana Kamberov.

But you do need to be a biologist to characterize that difference, and to uncover its underlying genetic and evolutionary causes. For the past decade, that’s been Kamberov’s focus, initially as a post-doctoral researcher at Harvard Medical School and now as a professor at the University of Pennsylvania.

In order to understand the evolution of our naked bodies, scientists had to first document exactly how skin covering differs between humans and other primates. For instance, people could look bare because we have fewer hair follicles — sacs beneath the skin from which hairs grow — or because we’ve maintained similar numbers of hairs, but much tinier ones.

It’s been established that adult humans have between 2 to 5 million hair follicles across their bodies (or ~350-5100 per square inch, depending on age, sex and body part). But excluding the head, pubes and armpit, the majority are vellus hairs, which are extremely fine, barely visible and not connected to glands below the skin.

While human hair traits have been on the books for decades, in 2018 Kamberov and Harvard collaborators published the first systematic comparison with other primates (aside from a 1931 study that did not include vellus hairs). Analyzing skin biopsies from cadavers under a microscope, the team counted hair follicles in five body regions (forehead, back, chest, forearm and thigh) of seven humans, four chimpanzees and eight rhesus macaque monkeys. Although the sample size was small, the results showed that chimps and humans have about the same density of hair follicles. However, what sprouts from those follicles differs. Over most body regions, chimps have thick fur, whereas humans have fine vellus hair. Some are so small, they can only be seen with a microscope.

This indicates that our apparent nakedness did not result from a decrease in total number of follicles. Rather, it was a shift from fur to hair — hair diminished in size to the brink of invisibility.

The Sweaty Side of the Story

The study also counted sweat glands and here’s where humans stood out. For eccrine glands — the source of watery perspiration — density in humans was about 10 times higher than that of chimps or macaques.

This finding adds to earlier research comparing proportions of eccrine with apocrine glands. The latter, found near the base of hair follicles, secrete oily liquid that’s a mediocre coolant for humans (think greasy hair). Old World monkeys like macaques have equal parts eccrine and apocrine glands. Our closer relatives, chimpanzees and gorillas, bear roughly two eccrine for every one apocrine gland. And humans: almost 100 percent eccrine.

The density of eccrine glands explains Homo sapiens’ prodigious perspiration abilities. In hot conditions, most people can easily sweat one liter per hour or 12 liters a day. Our highest recorded rates, about 3.5 liter per hour, top those of chimpanzees by between five and ten times  (though max sweat-per-hour data on chimps is limited because it’s unethical to cage an animal and pump up the heat to extremes).

And because humans lack thick fur, this sweat can freely evaporate, drawing heat away from the body. Thus, it seems (nearly) bare skin and abundant eccrine glands are partnered adaptations for keeping us cool.

Strengthening this link, eccrine glands and hair follicles, which derive from the same embryonic cell layer, are influenced by shared genetic pathways. In a 2015 study Kamberov and colleagues showed mouse feet grew varying proportions of eccrine glands or hairs, depending on activity levels of the En1 gene during development. These effects of this gene are thought to be very similar in humans.

Most researchers agree with the premise that fur-loss and eccrine gland-gain coevolved for thermoregulation during human evolution. The obvious next question, then, is: When exactly did that occur?

Certainly after our last common ancestor with chimpanzees and before the origins of Homo sapiens. So that narrows it to sometime between about nine million and 300,000 years ago.

Okay, researchers have proposed at least two evolutionary phases when enhanced cooling would have been particularly advantageous for hominins (humans and our extinct ancestors after we split from chimps). The first is when African hominins began walking upright in more open habitats between four and seven million years ago. Lacking fire, complex weapons, or the safety of dense tree cover, these three to four foot tall bipeds, like Australopiths (and possibly Ardipithecus, Orrorin and Sahelanthropus), were probably easy targets for predators. To minimize encounters, our ancestors may have foraged during the hottest times of day, when most predators are sluggish or snoozing. This pressure to be active in heat would have certainly favored bare skin for superior sweating.

Alternatively, fur loss may have occurred later, when our ancestors switched from prey to predator. Around two million years ago hominins like Homo erectus became hunters, probably tracking game for long hours in hot, open environments. This is evident from butchered animal bones, found at Homo erectus sites. Furthermore, the species seems to have been a far better endurance athlete than its predecessors based on skeletal features that indicate enhanced running and walking abilities, like long legs, modern feet and a bigger attachment for the butt muscle.

And our understanding of the antiquity of human nakedness could soon improve. As researchers elucidate the genetic underpinning of fur loss, they will be able to estimate when those DNA changes occurred — narrowing down which hominin species hair loss occurred in and what selective pressures were involved in this evolutionary milestone.

According to Kamberov, “We’re really at the cusp of knowing the answer.”