There's little evidence for the benefits of raw pet food, and it increases the risk of dangerous pathogens. 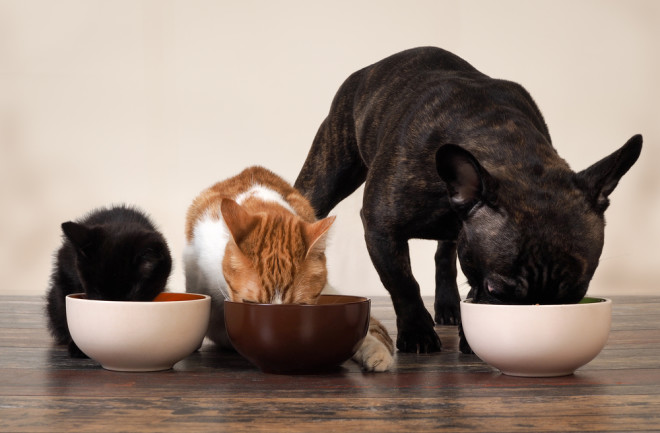 Though some pet owners tout the benefits of a raw, natural diet for their companions, there's little science to back it up. (Credit: Irina Kozorog/Shutterstock)

As more people embrace clean-eating diets and cut out processed foods in an effort to be healthier, they’re also putting their dogs on raw food diets to help their four-legged family members achieve similar benefits.

Social media influencers and online resources, like Rodney Habib and Perfectly Rawsome, suggest raw food diets replicate how pets ate in the wild before they were domesticated and offer benefits like shinier coats, dental hygiene, improved digestion and smaller stools.

But most vets disagree, saying these claims are not backed by science.

The American Kennel Club (AKC), American Veterinary Medical Association and other groups discourage pet owners from feeding dogs raw or unprocessed meat, eggs and milk. Raw meat and dairy can carry pathogens, like E. coli, listeria and salmonella, which can make pets and people sick or even cause death.

A 2011 study published in the Canadian Veterinary Journal suggested that any evidence for the benefits of raw food diets for pets is anecdotal. Additionally, the researchers point out that vets should be informing pet owners of the disease risks associated with raw food.

Jennifer Larsen, a professor of clinical nutrition in the Department of Veterinary Medicine at the University of California, Davis, doesn’t recommend raw food diets for pets. She links the trend to pet food marketing’s emphasis on ingredients over nutrients and the general “romanticizing of nature” that compares dogs to wolves.

“If somebody that you consider to be reliable — like a celebrity veterinarian on the internet, for example — is telling you that raw food is the way to go, and it's the way dogs evolved and the way they should all be eating, and it's much healthier and kibble is dangerous, then it's really difficult to [convince] those people that traditional pet foods are perfectly safe, and they're adequate choices for the vast majority of pets,” Larsen says.

But some vets nevertheless do advocate for more natural pet food options. Karen Becker, who describes herself as an integrative wellness veterinarian, advocates for minimally processed, nutritionally balanced and gently cooked or raw diets for dogs. This feeding method is more “biologically appropriate,” she says, referring to how dogs ate in the wild before domestication.

Too many pets are fed “fast food,” or feed-grade kibble and canned pet food, says Becker, who is affiliated with alternative medicine brand Mercola and has a pet health YouTube channel.

“I believe the less processed foods are for humans and pets, the healthier they are,” she says.

Some advocates hold that raw food is better for pets, though little evidence supports that. (Credit: Monika Wisniewska/Shutterstock)

But, “dogs are not wolves” and shouldn’t eat raw meat and bone like them, says Jerry Klein, AKC’s chief veterinary officer.

“Through the thousands of years and generations of becoming domesticated, dogs became omnivores who evolved to eat what we people eat,” Klein says.

Wolves are carnivores, he says. Their gastrointestinal systems can process raw meat, and they absorb nutrients differently than dogs do. In addition, their ability to fight potential pathogens is limited compared with wolves as well.

Dogs are better than wolves at digesting starches, key nutrients in grains like wheat and rice, according to a study published in Nature. Researchers suggest dogs and humans adapted similarly to the development of agriculture.

“All reported benefits of feeding raw diets in dogs are anecdotal, not based on scientific study results,” Klein says, urging caution in feeding dogs raw diets. In fact, most research on the subject has focused on the dangers of pathogens in raw diets and how they could impact animals and their owners.

More research is needed on the true benefits and safety of all dog foods, comparing kibble, canned food and raw diets, Becker says.

“Across the board, the pet food industry is lacking unbiased, objective, lifetime studies about one feeding technique over another,” Becker says.

The healthiest diets should be vet-recommended, based on an animal’s age, breed and any health conditions. Larsen urges pet owners to choose foods based on World Small Animal Veterinary Association nutrition recommendations, which list whether the food was formulated by a full-time nutritionist and provides a nutrition analysis.

“Now that we have all of this proof and the fact that there's no benefit, it makes it really difficult for somebody who is interested in animal health and has a public health responsibility to recommend raw diets,” Larsen says.