Why Do We Even Wear Pants? 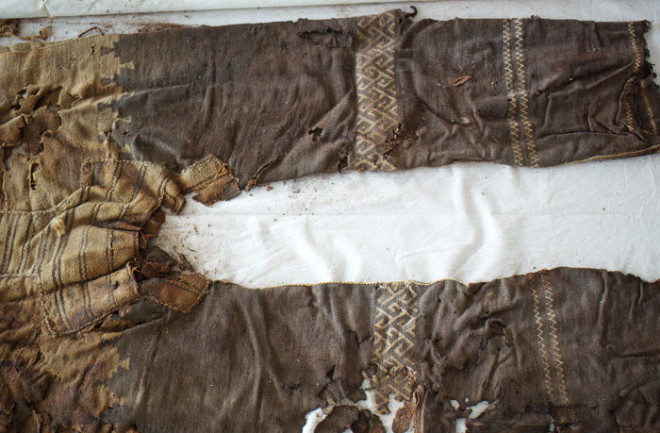 From far above, the area around Yanghai cemetery looks like a collection of ground-dwelling wasp dens, drilled into a gravelly desert. It gets hot in this region of remote western China — up to nearly 120 degrees Fahrenheit, and dry. That’s a hard-knock climate, but it’s perfect for preserving ancient artifacts. And if you zoom in on the region, and dig in, as archaeologists have, you’ll find tombs with well-kept secrets. Inside two of them, scientists found not just human remains but the remains of what covered those humans.

I’m talking about clothes, and not just any clothes: pants. These are the oldest pants (discovered) on Earth — more distressed than any jeans Gap can offer — dating back some 3,000 years. They’re tailored wool, and constructed from sewn-together pieces of uncut fabric. If Project Runway had magically predated television by about 2,930 years, the designer of these leg covers would have had a shot at the win.

But resting in peace with these pants were other artifacts, ones that provide clues about how pants got here in the first place, and why we wear them instead of tunics or togas or kilts. There were “grave goods,” as researcher Mayke Wagner of the German Archaeological Institute and her colleagues called them in the official publication about the find, nestled underground with their gone-but-not-forgotten owners. The two pants-wearers were buried with weapons and gear for riding horses.

Putting these facts — past-prime pants plus equestrian effects and war paraphernalia — together added heft to an idea that archaeologists have had for a while: The split-leg garments we know and love became standard fashion not because humans have two legs and want to show off their shapes, but because humans began hopping on the backs of horses.

“The design of the trousers from Yanghai seems to be a predecessor of modern riding trousers, which, together with other grave goods in the tombs, allows the assumption that the invention of bifurcated lower body garments is related to the new epoch of horseback riding and greater mobility,” says Ulrike Beck, researcher studying the design and construction of early clothing.

And their construction suggested to the archaeologists that these pants weren’t designed just to protect from the (significant) elements in the Turpan region but were optimized for horse travel.

While these pants, and their equine-riding wearers, date back to between the 13th and 10th century BCE, leg-separating fabric didn’t catch on in Euro-“civilized” (Greek or Roman) culture for a while after that. Only barbarians, those cultured people believed, wore trousers. Take the Scythians, a group of Iranian nomads, or the Hunnu of Central Asia. The Greeks called Middle Easterners’ and Persians’ lower-wear “sacks,” and not in a nice way.

The Greco-Roman fun-making stopped, though, around the time those civilized statue-builders realized that mounted soldiers—cavalry—had a huge advantage over average-heighted people running around on their own two feet. To maintain military dominance, they needed to get atop the equines, to avoid tangling their tunics, and to protect their nether regions. And so, enter pants, which were also warmer as these people expanded northward.

When the Romans wore loose pants, they gave them a nice name: braccae, a word that later became the English “breeches.” And after the Romanics lost their military dominance despite their attire, the people in charge of Europe were full-on horse-riding pants-lovers.

A person strolling through a plaza would no longer be called out as a barbarian for two-cylinder attire. Instead, he signified to the world that he was ready for battle, or at least ready to hop on a horse and head somewhere important, legs spread.