Why Do Leaves Turn Red in Autumn?

Fall is stressful, for humans and plants alike. Plants cope by deploying a highly useful and beautiful color change. 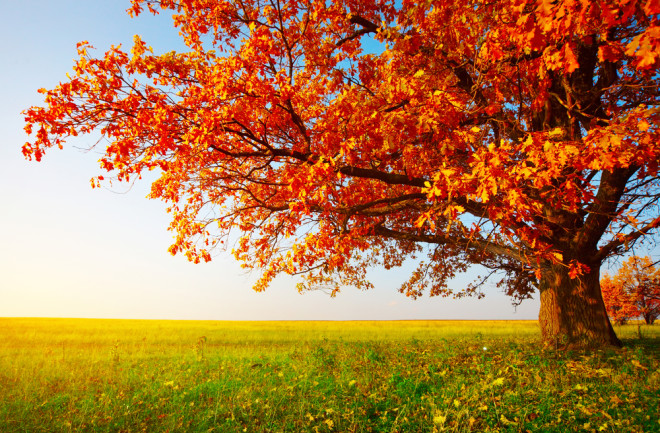 Autumn’s yearly arrival comes laden with many indicators: a proliferation of turtlenecks, Charlie Brown specials, and Starbucks drinks that include the word “spice.” But perhaps most traditional are the widespread hues associated with the season — the burnt oranges, cider browns, canary yellows, and mulberry purples that color temperate regions’ commercials, kitchen tables, front porches, and soon enough, leaves.

What Gives Leaves Their Color?

During spring and summer months, leaves are green because of their high concentration of chlorophyll, the molecule of photosynthesis. Guiding a tree’s traditional food-making process, chlorophyll absorbs light energy into a storable, sugary form — often glucose. Packed into nearly every leaf cell, chlorophyll is crucial, abundant, and green.

Also present, in much lower concentrations, are carotene (orange) and xanthophyll (yellow) pigments. But these hues are hidden, overwhelmed by the green of chlorophyll until autumn, when trees change their food production process in anticipation of colder weather and less sunlight. Chlorophyll, no longer needed, degrades. Carotene and xanthophyll — and the carrot, salamander, and goldenrod shades of fall — are revealed.

But the story of why leaves turn red, then, is slightly more complex than a pulling-back of pigments. It’s a tale of regulation, stress, and climate change, one that didn’t begin to receive much attention from scientists until the late 1990s. The story of red begins with anthocyanins.

Gorgeous though it may be, autumn is certainly not all sunshine and roses. In fact, the season is quite the opposite, often a stressful time of year for humans and trees alike. Dipping temperatures and a disappearing sun make life difficult. Just as humans might turn to naps, baking, or Netflix-bingeing during darker winter months, plants lean on coping mechanisms too. In response to all sorts of external stress — extreme temperatures, drought, even scavenger and pathogen threats — plants produce chemicals called anthocyanins, a class of pigment that absorbs green and yellow light and gives rise to fall’s mauve, scarlet, violet, and midnight-colored leaves.

Walk through a forest in early November, and anthocyanins are likely to be packed in leaves all around you. They are water-soluble pigments found in plant tissues throughout the plant kingdom — from California maples to the tropical forests of Panama. Depending on their acidity level, their foliage might appear red, purple, blue, or black. Anthocyanin compounds have antioxidant effects, and are abundant in some well-known, antioxidant-rich foods: raspberries, blackberries, plums, cabbage. They are also the primary source of color in popular bouquet flowers: roses and chrysanthemums.

As they relate to autumn, most research into anthocyanin protection has focused on their ability to keep a delicate balance between low temperatures and energy management. As scientists learn more about its unique abilities, the versatile pigment continues to earn its “Swiss army knife” moniker.

When chlorophyll-lacking leaves are exposed to UV radiation and light, anthocyanins function as a kind of proactive chemical sunscreen. When leaves receive too much light for their photosynthetic capacity — which, in the fall, is significantly less — plant cells create free radicals, or high-energy forms of oxygen that can ultimately kill cells and the plant. Research has shown that anthocyanins work to divert and store excess light and UV radiation from excited electron transport chains.

Crucially for trees in temperate climates, such as broadleaved evergreens, anthocyanins have parlayed this ability into providing cold-weather resistance for the leaves that produce them. In low temperatures, life-maintaining chemical reactions and enzyme activity occur more slowly. The excess energy stored by anthocyanins, it is thought, helps these pathways continue chugging along at the right pace — demonstrating the pigment’s ability as a backup generator of sorts.

But the role of anthocyanins isn’t exclusive to just autumn. In a climate-changed and changing world, trees and other plants are facing unique challenges. Under drought conditions, plants with an increased concentration of anthocyanins have shown better osmoregulatory properties and higher rates of survival. In nutrient-poor soil, or soil with heavy metals and fertilizing chemicals, leaves might turn red prematurely, entering a preservation mode well before the traditional autumn season.

For all the trees reading this: Now is the time to “fall back” into self-care mode with anthocyanins. For everyone else, enjoy — and understand — the familiar autumn hues that result.