Why did people start mummifying their dead in the driest place on Earth? 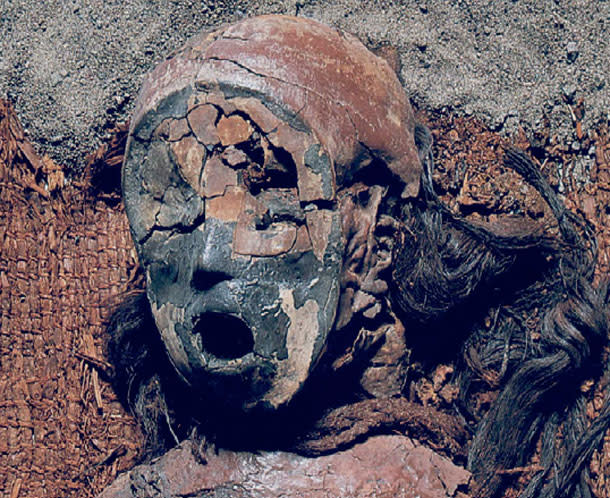 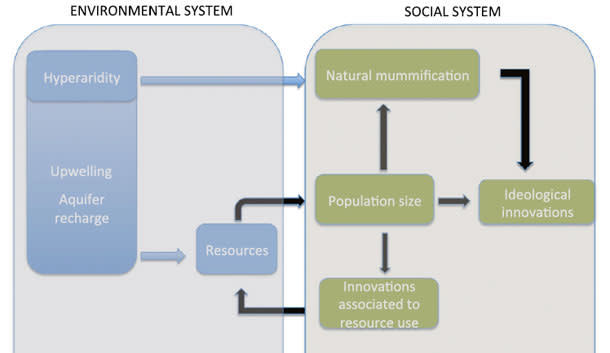 One does not simply start mummifying one’s dead. Mummification is a technically challenging business that involves sophisticated tricks for preparing a corpse. It’s also steeped in intricate cultural traditions. How does such a practice start? Chilean scientist Pablo Marquet has tried to answer that question by studying the world’s oldest mummies – those created by the Chinchorro people of northern Chile. The Chinchorro were preserving their dead some two thousand years before the Egyptians started doing so. Rather than just mummifying their elites, the Chinchorro preserved all of their dead – man and woman, elderly and infants. They went to great pains to do so. They would remove the organs and muscles of their dead, reinforce the skeletons with sticks, and fill the bodies with earth and vegetation to get the right shape. They covered the body in a mud coat and clay mask, and decorated it with colour. Marquet thinks he knows why these practices began. Rather than simply looking at cultural factors, he has intimately tied the practice into changing climates and shifting population sizes. At the time that they started mummifying cadavers, the Chinchorro had gone through a population boom, driven by rich coastal seas. But they also lived in the Atacama Desert: the so-called driest place on Earth. In such an arid environment, any buried corpses would have taken their time to decay, if they did at all. The very land around them naturally mummified the corpses, and the Chinchorro simply followed suit. Today, the Atacama is legendarily dry and some weather stations there have never seen any rain. But it wasn’t always that way. The desert has gone through wet phases in the past. Marquet’s team found a recent one by analysing a long column of ice taken from the nearby Bolivian highlands. The ice told them how much snowfall there was in the mountains over a 14,000 year period, which reflected the amount of rain and the level of freshwater flowing into the lowlands. This data set suggested that between 5,000 and 7,000 years ago, water in the Atacama wasn’t as limited as it usually is. The Chinchorro could have taken advantage of the run-offs from the mountains, and wetlands that emerged along the coast. The oceans of the time had strong upwelling currents that pulled nutrients from the deep, and supported a thriving supply of fish and seafood off the coast. It’s no surprise that the Chinchorro also thrived. This period was their heyday, when they abandoned a nomad’s lifestyle and settled in the otherwise harsh Atacama. Marquet’s team estimated the changing size of the Chinchorro population by using data from 460 archaeological sites in Peru and Chile, which have all been carbon-dated. The results showed that this population started rapidly increasing around 7,000 years ago, peaked 6,000 years ago, and fell into decline around 4,000 years ago. With large and stable numbers, the Chinchorro had the right ingredients for fresh cultural innovations, including new forms of fishing hooks, harpoons and weights. Mummification was one such innovation. Marquet thinks that even though groundwater and runoffs supported the Chinchorro, the Atacama was hardly lush. It was still an arid desert, and any dead bodies that were buried there would have barely decayed. He writes, “[This led] to the natural accumulation of naturally mummified corpses through time, which soon become a significant component of the landscape.” The team even built a mathematical model to simulate the build-up of natural mummies. They calculated that a group of 100 hunter-gatherers would have produced 400 corpses every century. The Chinchorro settled around the Chilean coast around 10,000 years ago, so by the time their population peaked, every individual would have been exposed to several thousand natural mummies. Of course, the bodies weren’t just lying around but the Chinchorro buried their dead in dense clusters within shallow graves. They could easily have been exposed by erosion or everyday activities. The presence of these natural mummies would have strongly influenced the living Chinchorro people. Without decay, Marquet thinks that they would have had complex beliefs about death, “because the dead would have been still among them, albeit in a different state of existence.” So, environmental changes supplied freshwater to otherwise inhospitable desert, and bountiful food to the adjoining coast. The Chinchorro ate and drank well on such riches; they grew in numbers, and their culture blossomed. And the same environment that helped the living also preserved their departed, setting the scene for what Marquet describes as an “elaborate cult to the dead”. And perhaps, it was the environment that led to the loss of mummification. Around 4,400 years ago, the Atacama started becoming the extraordinarily dry place it is today. On top of that, warm currents flowing into Chile acted against those welling up from below, and slashed the amount of nutrients and food in the surrounding waters. Bereft of food and water, the Chinchorro population started to fall. Perhaps those who knew the intricate art of mummification passed away, or failed to pass it on to their dwindling peers. Either way, the practice had disappeared by 4,400 years ago, before the Chinchorro culture itself followed suit. Reference: Marquet, Santoro, Latorr, Standen, Abades, Rivadeneira, Arriaza, Hochberg. 2012. Emergence of social complexity among coastal hunter-gatherers in the Atacama Desert of northern Chile. PNAS http://dx.doi.org/10.1073/pnas.1116724109