Why Did Magic Mushrooms Evolve 'Magic'? 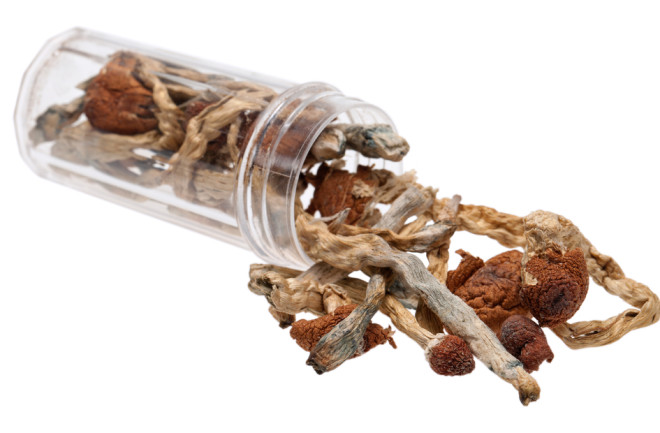 Psychedelic mushrooms. (Credit: robtek/Shutterstock) By now, it's pretty clear that psilocybin, the active compound in "magic mushrooms" has a potent effect on human beings. But psychedelic visions obviously weren't the evolutionary force that caused some fungi to make the compound — it's an unforeseen side effect. With a new genetic analysis, researchers think they've identified why magic mushrooms started producing "magic" in the first place. The culprit, they say, is insects.

By sequencing the genomes of three separate species of psychedelic mushrooms and comparing them to genomes from mushrooms not known to possess psychoactive properties, the researchers identified a cluster of five genes common to all three that are involved with psilocybin production. Though the three psychedelic species aren't closely related, they do inhabit similar environments, namely dung and decaying wood. Because of this, the researchers think that the psilocybin could be a defense against insects that commonly inhabit such environments and would compete with or even eat the fungi. They've been shown to suppress appetite in insects, perhaps convincing them to eat fewer fungi, or to leave more food behind.

The species of fungi the researchers looked at aren't closely related, either, leading them to suspect that the genes were passed around by something called horizontal gene transfer. Instead of being inherited from previous generations, in some organisms, certain genes can be passed directly between two individuals. It's common in bacteria, but fungi can do it too. This is probably what happened here, the researchers say, in research published Tuesday

in Evolution Letters. The gene cluster is too similar to have arisen three separate times, so it must have been shared between fungi, like we might pass around a particularly tasty recipe. The discovery might researchers to identify other molecules that could be useful to humans. Magic mushrooms have already proven to possess valuable medical applications, whether that's treating depression in cancer patients

, or helping individuals with PTSD

. Like many helpful compounds from the natural world, psilocybin has been repurposed for human good. Other natural remedies surely await.