Homo sapiens have always been on the move. But the traditional out-of-Africa story explains that H. sapiens evolved in Africa and then migrated in a wave to colonize the rest of the world. What sparked this exodus? 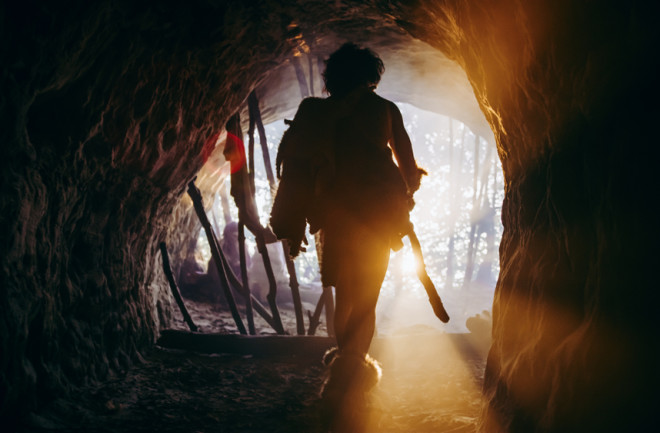 Whichever way you look at it, the story of our species’ birthplace in Africa and dispersal across the planet is incredibly complicated. The conventional out-of-Africa story that took root in the 1980s describes a group (or groups) of Homo sapiens, some 150 to 1,000 people, crossing through the Middle East from northeast Africa before spreading throughout Eurasia around 60,000 years ago. They were not the first to make the journey, but they appear to have become the forbearers that populated the rest of the world.

This story, or model, is built from robust evidence from DNA and fossil analyses. But there is a lingering question that hasn't been answered: Why did they pick up and leave?

Before laying out a few of the major theories, we might add some cautionary notes and other considerations. Perhaps most importantly, H. sapiens didn’t just leave once; they were leaving all the time. An impermanent population made an excursion 180,000 years ago, as evidenced by fossil finds of a jawbone and teeth belonging to an anatomically modern human at a site in Israel. There's even evidence of humans making it all the way to the Arabian interior 20,000 years before the eventual out-of-Africa event.

And if you disregard anatomically modern humans, the journey began far earlier — far, far earlier, like a mind-numbing 2 million years ago. Homo erectus, an ancient upright ape, had found itself out of Africa and into China, Indonesia, and Europe before H. sapiens had even evolved. The H. erectus populations that remained in Africa likely gave rise to both H. sapiens and Homo neanderthalensis.

Of the who, what, when, where and how questions surrounding the migration, it is why that is often the most impenetrable to science. Why, exactly, did our ancestors leave their homeland? Short of catching a time machine back some 60,000 years and witnessing our ancestors on the plains of Africa, we may never know for sure. As a result, we must find satisfaction in the answers that circumstantial evidence can provide.

Climate change is one of the most commonly cited forces affecting why humans left Africa. The reasoning goes like this: We humans thrive in a climate that has plentiful rainfall. Rainfall governs the growth of plants, and plants govern the density and diversity of large herbivores that our ancestors would have relied upon for food. Any significant changes to this system (you might imagine) would lead to our ancestors packing up their homes.

And indeed, the system changes all the time — and dramatically. For instance, Earth, while spinning around the Sun, can lapse into a wobble or have its orbit stray farther out into space than usual, plunging the planet into an ice age that changes the rainfall, weather patterns, ecosystems, and biodiversity of the entire planet, and making things rather unfavorable for humans.

These ice ages, also known as glacial periods, occur regularly and last for tens of thousands of years. They also are known to have significantly changed the climate of northeast Africa, one of the most likely passages of our great exodus. This area of Africa (and our path through the Middle East) is prone to desertification, the formation of deserts that were thought to be impenetrable to our ancestors — specifically the Saharan and Arabian.

When the glacial periods are absent, though, it’s a free-for-all. Parts of northeast Africa become lush and flourish with rich ecosystems, forming a route between Africa and the Middle East that researchers refer to as green corridors, passages assumed not only favorable but necessary for human migration.

The warm and wet conditions, that green light thought necessary for our migration, were absent when we left, according to a 2017 study. Analyzing sediment cores from the Horn of Africa, the evidence shows that the climate of northeast Africa around 60,000 years ago — our departure date, according to genetic evidence — was in the grip of an ice age. It was cold and arid, and so if it was this route that we took, then we did so at the height of adversity, perhaps even to escape these conditions.

Alternatively, we might not have used this route at all, traveling instead from a more southerly exit point and following the coastlines and their more agreeable climate.

Or, alternatively again, a more recent study from Ethiopia suggests that the climate was more subtle, more variable than previously reported and could have provided brief moist periods that could have been exploited by our versatile ancestors.

It’s clear from butchered animal remains and the evidence instilled in ancient teeth that our ancestors hunted and consumed large animals. Not just this, but they show evidence of understanding and exploiting the migratory routes of African mammals, such as elephants and cattle, for ambush hunting, as in this ancient Kenyan hunting site of H. erectus.

A spectacular finding in 2020 shows a rare convergence: a lake in Saudi Arabia, trampled with hundreds of footprints from hundreds of elephants, cattle, and horses. Pressed among them are the footprints of three humans — the oldest evidence of H. sapiens in Arabia.

And while this finding doesn’t directly demonstrate herd animals being the impetus behind our exodus from Africa, it does show that — just like our relationship with the climate and the weather — we humans are inextricably linked to our food sources, including herds of mammals whose search for nutrient-rich plants and a varied diet leads them on grand migratory journeys across the continent.

Another theory states that it wasn’t eastern populations that left the continent. Instead, it was communities of people from the south who made the trek. Adding to this theory is that prehistoric people hailing from the south of Africa showed the earliest and clearest examples of complex technology and symbolic behavior. These skills and abilities would have been instrumental in an Africa exodus. But genetic data has called these views into question, suggesting that these southern populations were not the forebears of humans that left Africa.

A more likely scenario is that there was a south-to-east migration that happened within the continent first before diaspora of H. sapiens. Over the last few hundred years, the continent has been subject to wavering climate conditions. For a brief period of time around 60,000-70,000 B.C., a wet corridor between the south and the eastern part of the continent opened up — the perfect opportunity for southern people to move east. One of the more recent iterations of this theory appeared in Nature Scientific Reports in 2019.

The people who made it to East Africa mingled with the existing population and transferred their cultural and technological know-how. Shortly after these encounters, it is believed that the existing, eastern population left the continent and peopled the rest of Earth. In other words, when new people moved in, the previous neighbors decided it was time to move out.

According to researchers who modeled patterns of migration waves, there’s no need to look beyond human behavior to understand why we left Africa. We simply formed populations based on shared traits, maintained regional boundaries, and migrated spontaneously for any number of reasons.

Where there are dense populations of humans, there is a higher chance of spontaneous migration occurring. Given that Africa bore the largest density of humans, it was from Africa that humans would disperse — without any invocation of weather or food — to seed humankind to the rest of the world.

Just as these earlier H. sapiens didn’t know what lay beyond their African homelands, modern people also wrestle with uncertainty about the past. Expectations of concrete answers must be abandoned for now. And perhaps we may never know what prompted exoduses from Africa. Each endeavor likely involved a unique reason — and some of these answers will forever rest with the individuals who left.