Why Are Yellowstone's Elk Disappearing? 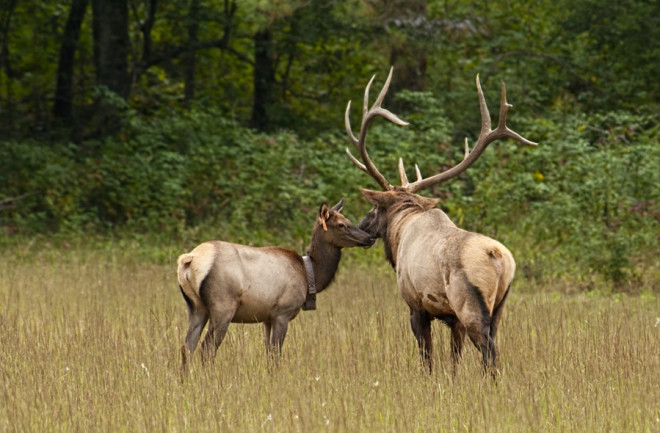 Just east of Yellowstone National Park, snowcapped mountains rise sharply on either side of the narrow road to Cody, Wyo. This lush valley gets its name, Wapiti, from the Shawnee and Cree word for elk. Herds of these majestic animals spend sunny days grazing the basin’s greenery and drinking from the glinting waters of the Shoshone River. Teddy Roosevelt called this stretch of Wyoming’s North Fork Highway “the most scenic 50 miles in the world.”

“Not so much in the winter,” says Arthur Middleton, a biologist who has logged hundreds of hours in the blistering cold north of the Wapiti Valley in recent years, trying to explain the region’s mysterious elk decline. His team fits the swift and unwieldy beasts with GPS collars to track their movements in the vast expanse of the Greater Yellowstone area. Doing so requires hitting the moving targets with tranquilizer darts or nets from the open door of an unsteady helicopter. In windswept mountains. In the winter.

The team typically sets out in the deep freeze before dawn. Middleton remembers one such morning when the temperature display on a bank in Cody read 14 degrees below zero Fahrenheit. Any colder and the helicopter wouldn’t have functioned. But not for the first time, Middleton risked frostbite and fingers to find the elk. They are, after all, why he came to Wyoming.

Elk have long been a fixture of this landscape, but the once-abundant animals have become scarcer as of late. In the past 20 years, one population has fallen from tens of thousands of elk to just a few thousand. And every summer, when elk migrate into Yellowstone National Park, fewer calves are spotted in the herd Middleton studies.

In surrounding states, where elk hunting brings in millions of dollars annually, scientists, local officials and residents have reflexively pointed fingers at the only new predator on the landscape: Gray wolves, once hunted to near extinction in the Lower 48, were controversially reintroduced to the Greater Yellowstone area in the mid-1990s to resume their predatory role in the imbalanced ecosystem.

According to the popular logic, the wolves preyed on elk, keeping the grazers’ populations in check, which allowed dwindling aspen populations, and the beavers that fed on them, to rebound. This logic was affirmed in 2007 when Scott Creel, an ecologist at Montana State University, published a study suggesting that the presence of wolves stressed the elk, leading to poor female health and fewer pregnancies.

But as the wolves proliferated, they came in direct conflict with the true top predator in the area — humans. The canines lurked near homes and preyed on livestock and occasionally pets, provoking growing resentment from residents. Simmering hostilities eventually boiled over: Hunters wanted to get rid of the wolves, while conservationists still sang the wolves’ ecological praises. The strong opinions on both sides were fueled by conflicting data, so the battle raged on, in and out of the courtroom.

Creel’s paper was seen as damning evidence against wolves, but his results were based on indirect observations. To effectively manage wolf and elk populations, the U.S. Fish and Wildlife Service and the Wyoming Game and Fish Department needed more, reliable data. The same year that Creel published his study, Middleton, then a Ph.D. student at the University of Wyoming, was put in charge of an ambitious research project to investigate more directly the effects of wolves on the elk population.

Over the next three years, he fitted 90 female elk and 15 wolves with GPS collars, which recorded their coordinates every three hours. From these data, a detailed map of long-term elk and wolf movements emerged. Middleton’s crew also counted the number of calves that survived each summer and recaptured the collared female elk twice a year for health checkups. He determined that the pregnancy rate among elk in the migrating herd was 19 percent lower than non-migrating herds nearby, and that from 1989 to 2009, the number of calves surviving to adulthood had declined a staggering 74 percent.

To confirm these numbers on the ground, Middleton spent months in the wild observing elk — a part of the job he came to loathe. Elk, he soon learned, don’t put on much of a show. “They eat. They lie down and ruminate. They walk around. And sometimes, they bite each other. It’s painfully boring,” he says, and he means that literally. “It’s freezing cold, and you’re usually hiking up some steep, snowbound slope, post-holing your way to the top, to some high observation point, getting all hot and sweaty and then standing still for hours and cooling back down to the point where you’re nearly hypothermic.”

Most conservation biologists and locals assumed Middleton’s research would provide the evidence state and federal agencies needed to support controlling the problematic wolf populations in Wyoming. But Middleton’s observations and GPS data showed that elk rarely encountered wolves. And when they did, the elk didn’t run away or even stop chewing unless the wolves came within about half a mile. Most importantly, there was no correlation between the rate of wolf encounters and the decline of either elk pregnancy rates or their levels of body fat, which are crucial for surviving the cold winter.

Middleton fits a wolf with a GPS collar after darting her. Lisa Shelton

Still, Middleton wasn’t ready to let the wolves off the hook. Maybe instead of scaring mothers, he thought, the wolves were eating calves. Serendipitously, another team of researchers had just dug up the numbers Middleton needed to find out. Wildlife biologist Shannon Barber-Meyer, then at the University of Minnesota, followed 151 elk calves in Yellowstone for three years. Almost 70 percent of the calves died before their first birthdays, and Barber-Meyer’s team determined that wolves killed only 15 percent of them — not nearly enough to explain Middleton’s missing calves.

If it’s not the wolves driving elk calf declines, Middleton thought, “What the hell is doing it?”

Death by wolf, Barber-Meyer found, was dwarfed by the 60 percent of these tagged calves killed by bears (more than half of them by grizzlies). That was three times as much bear predation as was found two decades earlier. Realizing the role of bears revealed a much bigger and messier picture than Middleton had anticipated.

The impact of grizzlies was growing, but their numbers weren’t rising enough to explain the number of calf kills, so Middleton turned to Jennifer Fortin, then a zoology Ph.D. student researching bear nutrition at Washington State University. By conducting long-term monitoring of grizzly bears in and around Yellowstone, she found that grizzlies had historically fed heavily on cutthroat trout they slapped out of the rivers. But in the 1980s, sport fishermen illegally released lake trout into Yellowstone Lake. The enormous invasive trout preyed on the native trout and competed with them for resources. And because the invasive trout spawn in deeper water than their native counterparts, they remain out of grizzlies’ reach. Fortin’s data showed that when fish were scarce, bears stalked the next easiest targets: elk calves.

But predation, even with bears included, didn’t explain elk’s low pregnancy rates. A changing climate, on the other hand, did. Severe droughts since 2000, possibly correlated with climate change, reduced grass production in the areas of the park where elk migrate in the summer. Elk were forced to consume immense quantities of nutrient-poor fodder to try and meet their caloric needs, but most females were still undernourished and therefore unable to conceive.

After spending five years trying to find the one thing that could explain the declining elk populations, Middleton has concluded that there isn’t one — there are many: Trout fishermen, bears, wolves, fish, climate change and factors yet unfound collectively shoulder the weight of that loss. “Changes in the system were perceived as a consequence of wolves,” he explains, but these reintroduced predators actually have a relatively small impact — one that is far outsized by the hoopla surrounding them. The elk population in Yellowstone is at the mercy of a much larger, human-altered ecosystem.