Why Are Our Brains So Big, Anyway? 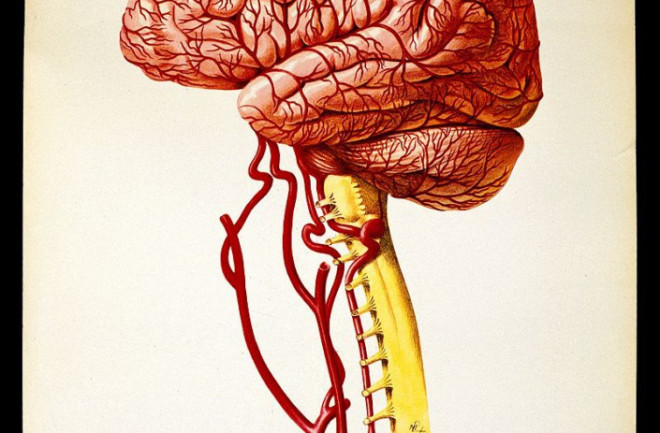 Brain: lateral view. Colour lithograph by Brocades Great Britain Ltd. (Credit: Wellcome Collection) Not to give us a collective swelled head or anything, but the Homo sapiens brain is big. Really big. For years, researchers have puzzled over why our noggin-embiggening occurred: Big brains are, after all, costly to feed. One leading theory held that our brains increased in size to manage the cognitive demands of ever-more complex communications and other social processes. New research suggests, however, that interactions with each other played only a small role compared with the big driver of bigger brains. The modern Homo sapiens brain is about three times bigger than the brains of australopiths, the predecessors of our genus. And it's six times bigger, proportionally, than that of other placental mammals. It's a strange supersizing, evolutionarily speaking: Brains require a lot of energy, which means a lot of resources, and the expanse of the stuff between our ears likely stunted our body size. Our brains also grow at a rate faster than our bodies — the human brain typically reaches maximum size around the age of ten years, long before the body attains its full height or reaches sexual maturity. As anthropologist and evolutionary ecologist Richard McElreath, commenting today in Nature on the new study, puts it: "Brain growth is not given priority in this way in other apes, and the human pattern is puzzling because it keeps our bodies smaller, more vulnerable and less productive for longer. The answer to this riddle must lie in how the human brain helped our ancestors survive and reproduce." And the answer, according to that new study, may surprise many. A Different Kind of Supermodel Researchers have proposed a number of hypotheses to explain why our big, bodacious brains could have evolved. For many, the leading candidate was the social-intelligence model: Our complex social interactions of competition and collaboration require a tremendous amount of brain power. The ecological-intelligence model, however, held that our most basic needs, such as finding food while not becoming food in the process, drove us to have ever bigger brains. A third model, the cultural-intelligence hypothesis, melds elements of the first two, suggesting that brain evolution was fueled by the demands of social skills required to learn and impart knowledge about how to survive. All three of those hypotheses sound plausible, but the problem was with testing them. The connections between brain and body size are highly complex, for example, and it's difficult to determine causation. The authors behind the new study set up a computational model that takes into account when, in the typical life, key parts of a human — specifically the brain, reproductive tissue and body size — require increased resources to develop. For example: An increase in brain size leads to an increase in skill, but an increase in body size makes it easier for the individual to use that skill to acquire more energy. It's a trade-off, in other words, and the complex model designed by the researchers generated different scenarios that could explain different brain-to-body-size ratios and, at last, reveal the most plausible reason we're running around with such big brains. The study considered four different kinds of challenges: between-individual competitive (me against you), between-group competitive (us against them), ecological (me against nature) and cooperative ecological (us against nature). In the scenarios run through the model, the challenges were weighted in different combinations until one emerged as the most likely to explain our big brains. If this all sounds complex, it is, but the key point is that a specific ratio of challenges did in fact pop up as the most likely to explain how our brains got so big. Bringing Home The Bacon Probably surprising to anyone who's ever rooted against the home team or waded into a political discussion on Facebook, the researchers found that the most likely model driving big brain evolution was only ten percent between-group competition. Cooperation appears to account for an additional 30 percent of the push for brain-embiggening. The main driver of increased brain size, accounting for 60 percent of the demand, seems to be meeting the ecological challenges our species faced — though this is perhaps less of a surprise to fans of "Running Wild with Bear Grylls," the old "Survivorman" and similar shows. Today's study appears in Nature. In his accompanying News & Views commentary, McElreath notes the research is neither perfect nor complete. It did not consider, for example, the cultural intelligence hypothesis, nor can the findings be applied to the evolution of intelligence outside of our own species. It's a start, however, and it creates a new methodology for approaching this complex question.