An interspecies primate war may be unfolding before our eyes. 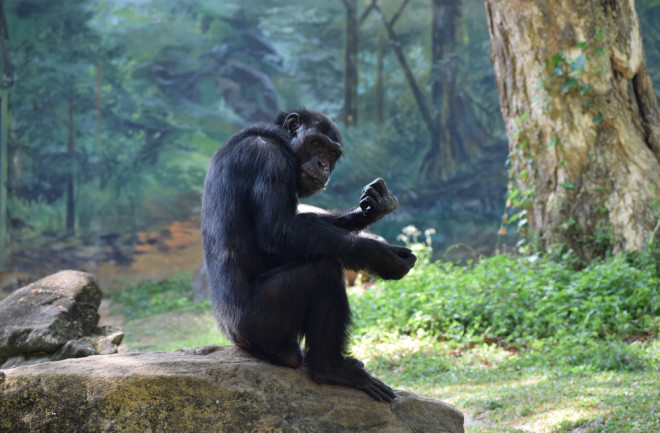 It's truly a wild time in the animal kingdom! Chimpanzees and gorillas have coexisted peacefully for many years, but in February of 2019 researchers were shocked to witness a vicious act of violence in Gabon's Loango National Park.

The researchers, from Osnabrück University and the Max Planck Institute for Evolutionary Anthropology in Germany, were studying the behavior of the chimpanzees in the national park when they observed more than two dozen attack five unprovoked western lowland gorillas (one silverback, three adult females and an infant). The near hour-long fight between the two groups cost the life of the infant gorilla, which was captured and beaten to death by the chimpanzees.

It was even more shocking when the traumatizing event repeated itself in December of that year, in the same park in Central Africa. This time, 27 chimpanzees went up against seven gorillas in a fight that lasted about 79 minutes and resulted in another helpless infant gorilla being killed. It's unclear whether the same chimpanzees were also involved in the first incident. Regardless, the question of what caused these ruthless attacks remains. To get to the bottom of it, let's take a look at the rich history and relationship of these two species.

Gorillas are the largest living primates, but don't let that fool you. These animals have been nicknamed "gentle giants" and typically live and move in small groups. The silverback, an adult male gorilla, leads the pack. Western lowland gorillas, a subspecies, primarily occupy the tropical rainforests of Central Africa, including in Loango National Park. The adult males in this region weigh an average of 300 pounds and can stand up to 6 feet tall. The adult females weigh an average of 150 to 200 pounds and stand up to 4.5 feet tall.

Chimpanzees aren't much different. Like gorillas, they occupy much of the tropical jungles in Africa, including Loango, and feed on similar items such as plants, fruits or insects. Chimps are typically between 3 to 5.5 feet tall when standing upright. Males can weigh up to 154 pounds, while females can weigh 110 pounds.

However, unlike their peace-loving primate relative, aggression and violence is inherent among chimpanzees. In fact, male chimpanzees are often known to attack one another over territorial disputes. Research has shown chimp-on-chimp violence to be fairly common, suggesting that chimpanzees are predisposed to murder. A likely explanation may be that new territory often means more food and resources that may be scarce in certain regions.

Yet, most of the aggression chimpanzees demonstrate has been directed to their own kind. Given the commonalities among chimpanzees and gorillas, the two primate species have been splitting territory, food and other resources peacefully for years. According to Simone Pika, a cognitive biologist at Osnabrück University, the two species have been regularly observed interacting peacefully in foraging trees and even playing with one another. However, the brutal attacks that took place in 2019 indicate that tension may be on the rise between the two groups.

They say sharing is caring — and many species in the animal kingdom abide by that rule. But what happens when livelihood is threatened?

According to a new study conducted by the researchers who observed the violent encounters, competition over limited resources may have been a driving factor. With climate change on the rise and a decrease in fruit availability in Loango, the instinct observed in chimpanzees to fight over food and territory may have kicked in and incited the cruel acts.

But why did the chimpanzees kill the infant gorillas? And will the violence continue? These questions remain unanswered. “We are only at the beginning to understand the effects of competition on interactions between the two species in Loango," Pika said in a press release. Regardless of the underlying reason, it is safe to say that we must keep a watchful eye — lest we have a full-blown interspecies primate war on our hands.