Who Built Teotihuacan, One of the Largest and Most Impressive Ancient Cities in Mesoamerica?

Despite over a century of archaeological work, there are large gaps in our knowledge of this massive city and the people who lived there. 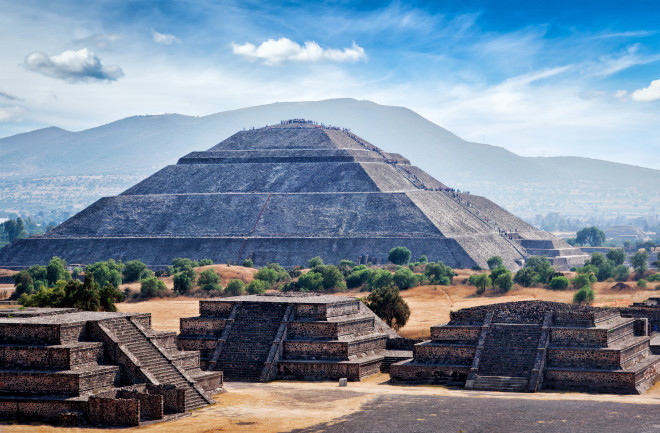 Just outside Mexico City lies another metropolis, constructed not out of concrete and glass but of native stone. Its massive, stepped pyramids rise hundreds of feet above the broad floor of the Valley of Mexico. These pyramids tower over ancient ceremonial grounds and the ruins of what was once a powerful, thriving city.

Teotihuacan is one of the most impressive ancient sites in all of Central and North America. Its scale surpasses the cities built by the Maya and other Mesoamerican civilizations. Though most notable for the Pyramids of the Sun and Moon, and the three-mile-long Avenue of the Dead they overlook, Teotihuacan was also a bustling, cosmopolitan city. Excavations have revealed numerous apartment complexes that could have held up to a hundred people each, as well as evidence that intermingled ethnic groups from all over Mesoamerica once resided in the city.

The city’s rulers held sway over a large part of the Valley of Mexico, and perhaps even influenced civilizations much farther away. For hundreds of years, Teotihuacan would have been one of the pre-eminent population centers of the Mesoamerican world — a place of wealth, power and culture.

But despite its obvious cultural and political significance, and well over a hundred years of archaeological research, we still don’t know many basic facts about the city. The identity of its builders remain a mystery, as does the language they spoke and how their government was organized. Though Teotihuacan’s might and significance are plain to see, the city does not easily yield up its secrets.

Teotihuacan was built more than two thousand years ago, and was a flourishing city by the second century A.D. The city itself was built according to a rigorous design plan — it is laid out geometrically, and features a complex network of irrigation canals drawn from the nearby San Juan river. Though the city center, with its massive temples, is the most stunning feature of the site, a robust urban hive surrounded the ceremonial plaza. At least 2,000 dwellings have been uncovered, and the city likely housed more than 100,000 inhabitants at its peak. That would have made Teotihuacan the sixth-largest city in the world at the time.

Teotihuacan was inhabited until around 700 A.D. What led the residents to leave — drought, famine, warfare — is unknown. But even after it lay empty, the city’s scale and impressive monumental structures lent it an aura of magnificence. Centuries later, the Aztecs came to view Teotihuacan, long-abandoned, as a sacred site. They would even hold rituals in its center. The city’s name today comes from the Aztec and translates as “the place where the gods were created.”

The temples are notable for the distinctive talud-tablero style of architecture, which features alternating slopes and panels to create the unique stepped pyramids of Teotihuacan. The Pyramid of the Sun has a base almost as large as that of the biggest Egyptian pyramid, and is nearly 200 feet tall. It’s likely the inhabitants of the city held rituals and ceremonies at the pyramids, as recent finds suggest. One chamber in the Pyramid of the Moon held valuable offerings like obsidian, pyrite, ceramics, and textiles, as well as the bodies of a number of people, most of them decapitated.

Teotihuacan culture spread far beyond the city itself. Talud-tablero-style temples are found in the Maya city of Tikal, some 700 miles away. Based on Maya inscriptions there, archaeologists think that warriors from Teotihuacan may have invaded the powerful Maya city-state in A.D. 378. Maya inscriptions note the death of the city’s leader, Jaguar Paw, on the same day as the arrival of a powerful warrior from a distant city. That and other evidence led archaeologists to surmise that Teotihuacan may have sent its armies hundreds of miles away to capture one of the jewels of Maya civilization.

But relationships between the Maya and Teotihuacan were not always so violent. There’s also evidence of Maya murals and art in the city, and that members of that society inhabited the city, though whether as diplomats or inhabitants is unclear. But their presence is indicative of the cosmopolitan nature of Teotihuacan. The city was probably filled with people from multiple cultures in Mesoamerica, living and working together.

It also makes the question of who, exactly, the Teotihuacan people were more complex. Scholars once suggested they may have included the Toltecs, a civilization that inhabited roughly the same region as Teotihuacan for hundreds of years. But others note the Toltecs didn’t flourish as a civilization until long after the city had declined, making them an unlikely choice. Others have suggested the Totonacs, a culture about which less is known, though Totonac descendants still live in Mexico today.

Another theory is that the city’s genesis came about as the result of a natural disaster, perhaps a volcanic eruption, that forced many people from their homes. Coming together in a place of safety, these refugees may have banded together to create a new city for themselves. The residents of Teotihuacan, then, may not have belonged to any particular group. Instead, they made their own, along with a new city to house them.

One thing that’s made it difficult to learn about Teotihuacan is the absence of a formal written language. By contrast, the Maya, along with other Mesoamerican peoples, used a formalized written script, and left thousands of inscriptions and other texts for archaeologists to study.

While the people of Teotihuacan did use a written notational system, it doesn’t appear to constitute an actual language. For this reason, archaeologists still don’t know what language (or languages) the city’s residents spoke.

Also unclear is the how the city was governed. Though the impressive physical organization of the city attests to a clear power structure, there’s little evidence of actual rulers. We know about the leaders of other civilizations like the Maya and the Aztec from the copious inscriptions and artwork they produced about their god-like rulers. Teotihuacan has none of that. It’s led some archaeologists to suggest the city may have been governed by a council, or some other more distributed form of leadership.

Clearly, puzzling facets of Teotihuacan culture remain to be answered. But new finds are still emerging. In 2003, a heavy rainstorm opened up a large sinkhole near the Temple of the Plumed Serpent. When archaeologists descended into the chasm they found themselves in a secret tunnel underneath the central plaza. It led to a room filled with offerings: seashells, cat bones, pottery, fragments of human skin and more, Smithsonian reports. The finds represent new opportunities for research and understanding — and along with future discoveries at the site, perhaps they’ll finally unlock the true history of Teotihuacan once and for all.