The secret is all in the muscles. But if that’s true, why can’t the biggest, strong animals run the fastest? 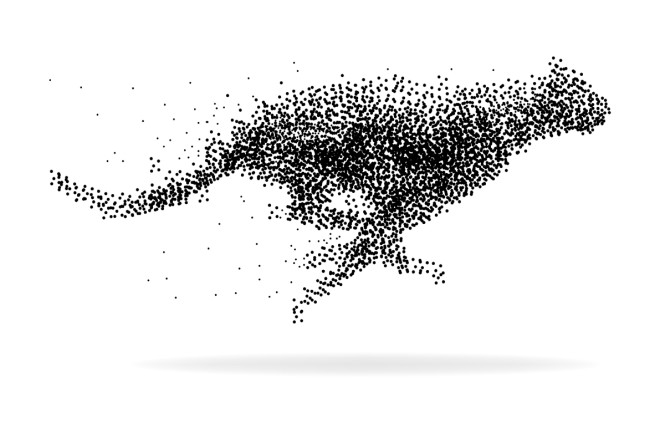 It will surprise very few to hear that the fastest animal on land is the cheetah, which can accelerate from 0 to 50 mph in just three strides and reach a jaw-dropping top speed of 68 mph soon after. Covering 25 meters a second, there are precious few moments between spotting a cheetah and being in its grasp.

While there is no undisputed winner in the race beneath the waves, the fastest sea creatures appear to be marlins, a group of sail-finned fish that are prized by deep sea fisherman and whose agility and ferocity were immortalized in Ernest Hemingway’s The Old Man and the Sea. Marlins use their speed to catch prey, rounding up schools of fish with bursts of speed up to 68 mph and thrusting their saber-like jaws into the trapped masses. Their speed is especially impressive considering that water is 1,000 times as dense as air.

For flying animals, which are six times quicker than terrestrial ones, the title-holder is the peregrine falcon, with a measured top speed of 186 mph (the product of a vertiginous downward dive). In terms of horizontal flapping speeds, the fastest bird is the large, aptly named swift, which propels itself to 105 mph in level flight (albeit a record that needs verifying). The common pigeon is nothing to sneeze at either, having been clocked at 92.5 mph.

While the world’s fastest organisms depend on a range of features to reach their incredible top speeds, the most significant of these is muscle — specifically, the muscle fibers known as "fast-twitch" fibers.

We use fast-twitch muscle fibers when we sprint, leap, or give a stubborn jam jar a good wrenching — basically any sudden, exerting action. The fastest animals have fast-twitch muscle in spades. Compared with slow-twitch fibers (used in endurance activities like jogging), fast-twitch fibers do not require oxygen to perform. Too hard-core to use air like the rest of our cells, fast-twitch muscles work anaerobically, burning quickly through their supply of adenosine triphosphate or ATP (the body’s fuel) to produce short bursts of strength.

Moderation in All Things

Though heavier animals, like heavy objects, are slower to accelerate, they should theoretically be capable of higher top speeds, since they contain more of the very material that generates acceleration: fast-twitch muscle.

However, it appears to be a universal phenomenon that the world’s fastest animals are all of medium size — take for example the greyhound, pronghorn, horse. This phenomenon has long been known to science, but it wasn’t until 2017 that we received a satisfying explanation.

In their 2017 paper, Myriam Hirt and colleagues compared the body mass and top speed of 474 species across the animal kingdom from the sky, sea, and land — from ants and bustards to octopuses to bats — and ultimately found that very familiar pattern: the heavier an animal is, the faster it goes...but only to a point,  after which top speed falls.

The larger the animal, the greater potential for acceleration and higher top speeds. So the question is: Why don’t we see elephant-sized animals running as fast as greyhounds? The reason, the authors say, is the availability of fuel: the ATP which powers fast-twitch muscles fibers.

The researchers propose that an accelerating animal with the muscle mass of an elephant will encounter shortages of ATP long before it is able to reach its full acceleration, thus falling short of its potential top speed. Such a shortage is not encountered by smaller animals, which accelerate quicker and reach the full output of their fast-twitch muscles (their top speed) in a shorter time.

Small animals are constrained by not enough muscle (and a tiny stride-length, i.e. they cover less ground with each step), large animals by not enough fuel. The body size where both problems are minimized is where we find our speedsters, such as the cheetah, pronghorn, and greyhound.

The team’s scaling law predicts the top speed of animals, based on their weight, with such fidelity that it can be used to predict the speed of prehistoric animals. A healthy sprinter who reaches around 20 mph would be outpaced by a 1.4 ton Allosaurus at 21 mph, and faster still by a Velociraptor, with 24 mph.)

Duty Factor, Bulk, and other Limits

Hirt’s model, that muscle fatigue determines top speed, is just one in a long line of others that, alone, is unlikely to explain the diversity of animal speed.

Extreme speed is often evolved to escape being eaten. If the requirement of not being eaten can be fulfilled by any other trait, speed can freely be swapped out. The tortoise, for example, appears to have exchanged speed for a shell, impala for evasive technique, and so perhaps elephants and the largest animals swapped speed for size, where large animals are just harder to eat.

Another important factor is “duty factor” — the time each foot spends in contact with the ground during a stride. During locomotion, each stride must exert enough downward force to move the animal forward and uphold its body mass; this force can only be imparted during a step, when the foot makes contact with the earth. The burden of so much force is effortless when you’re walking slowly and the responsibility can be distributed over leisurely footsteps. But when you begin to run, your feet contact the ground less and less, and by the time you’re sprinting they’re spending more time in the air than they are on the earth.

Imagine a galloping elephant. The incredible burden of the animal’s mass and acceleration would need to be transferred at each fleeting step. It’s likely such a thunderous weight could not be generated or withstood by its legs. This might explain why elephants have such a high duty factor, distributing the burden of their weight over steps which are most often on the ground, and why they are physiologically incapable of jumping, and even less likely to run like greyhounds.