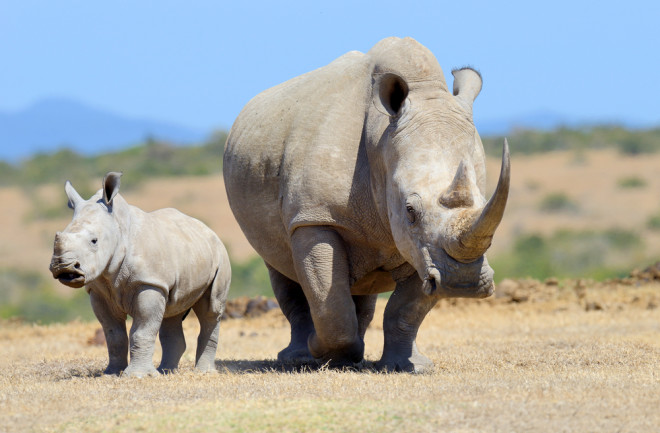 As the 231-foot long Boeing 747 made its final approach above Kigali International Airport in Rwanda’s capital city, Jes Gruner, park manager at Akagera National Park, looked on nervously. He had been following the progress of this flight’s passengers ever since they boarded a fleet of cargo trucks at the Phinda Private Game Reserve in South Africa, almost 30 hours before. When the chartered flight was delayed for eight hours at the Durban airport, he worried that the passengers, sedated and enclosed in individual crates, would suffer from dehydration.

After the plane landed, Gruner’s first question to the six veterinarians who disembarked was, “Are they alright?” The team immediately reassured him that the passengers — 30 adult southern white rhinoceroses — were fantastic. They had fared well despite the extended length of their transnational journey.

“It was a huge relief,” Gruner says.

But before the rhinos could take their first mouthfuls of water and bites of native grasses in their new home country, they needed to be loaded onto a waiting fleet of trucks and driven 60-odd miles east to Akagera. The moment of truth came 10 hours later, as the first rhino stepped out of its crate and into a grassy enclosure at the north end of the park. “Very often they can overreact and run out,” Gruner says. “Seeing the first rhino walk out really calmly was a memory I’ll always keep.”

On November 27, the rhinos, 19 females and 11 males, became the first southern white rhinoceroses to live in the wild in Rwanda in recorded history. The translocation came on the heels of nearly a decade of declining white rhino numbers due, in large part, to criminal poaching in southern Africa. The species is listed as “near threatened” by the IUCN. Conservationists hope that the translocated ungulates will give rise to a stable population in Akagera.

“We are introducing these white rhinos to a safe environment and spreading out the risk to the species as a whole because they are in a new environment,” Gruner says. “It’s a huge conservation milestone.”

Akagera has been home to rhinos since black rhinos were reintroduced to the park in 2017, but, perhaps because of the limited number, the criminal syndicates that organize poaching in southern Africa have yet to target the area. According to Gruner, most illegal activity in the park is small-scale “consumptive poaching” — a member of a neighboring community harvesting firewood or hunting antelope.

The Rwandan government is not naive to the risks of an increasing rhino population. In anticipation of a poaching threat, they have implemented robust security measures. Each of the newly translocated rhinos has been fitted with a location transmitter, a canine anti-poaching unit has been added to park law enforcement and regular helicopter surveillance missions will keep watch as the herd disperses.

“Unfortunately, rhinos are internationally persecuted. We’ve had to step up our security,” Gruner says.

Though the security and monitoring of the herd will undoubtedly be costly, the Rwandan government has faith that rhinos are a valuable resource. Unlike black rhinos, which prefer wooded habitat, white rhinos prefer to spend the day grazing open grasslands.

“These white rhinos are a huge tourism asset because they hang around in open plains where they are much more visible,” Gruner says.

For the past decade, the government has embarked on an ambitious mission to reform its once-derelict national park system and become a leader in the field of wildlife conservation. In 2010, the country handed over the management of Akagera to African Parks, a nonprofit that specializes in managing protected areas throughout the continent. Since that time, wildlife in the park has rebounded and both lions and black rhinos have been reintroduced.

Of course, the goal of the transition was twofold, in addition to restoring an ecosystem that had been degraded by agricultural encroachment, the government hoped to foster a prosperous tourism industry.

“When African Parks took over the park was barely making $200,000 a year,” Rwanda Development Board acting chief tourism officer Ariella Kageruka says. “By the time COVID came in 2019, the park was making $2 million a year.”

Much of the revenue from the rise in tourism has been reinvested into the park, but, just as importantly, it has been used to support the communities that border it. Ten percent of the tourism-generated income is submitted to a fund that is distributed to surrounding communities.

Hopefully, this equitable approach will also dissuade local community members from participating in poaching schemes. The future of white rhinos depends on it.