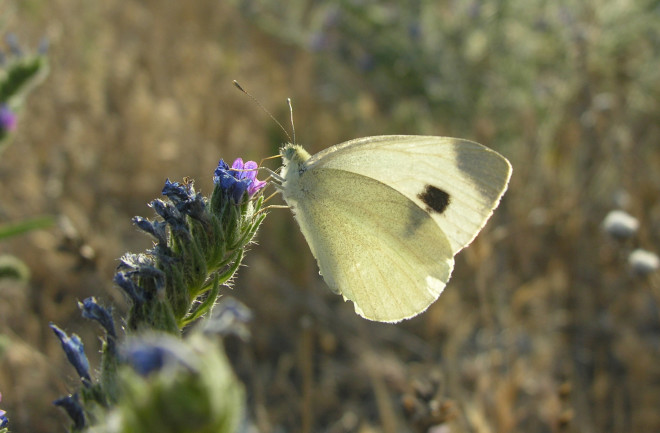 Lighter wins as climate warms: this butterfly, the Southern Small White (Pieris mannii), has continuously expanded its range northwards during the past ten years. Image c/o Nature Communications Most of the discussion on climate change focuses on startling images of potential loss: the city of Miami underwater due to rising sea level or the lone polar bear on an ever-shrinking iceberg. But some of the greatest impacts of our continued inability to curb our carbon appetite are surprisingly small—little changes that may ultimately have big implications. It's the butterfly effect—except, in this case, I literally am talking about butterflies.  Of all the species affected by climate change, the insects should be more feared for than any other group. Insects make up some 80% of all the species on Earth. Not only are there more insects than people, insects outnumber us by a couple hundred million to one. They outweigh us by at least fifty fold. Conservative estimates suggest there are over 1,800 insects for every square foot of Earth (counting the square footage covered in water). Though each individual may be small, the cumulative effects that insects have on our world, from their importance in food webs to their role as pollinators, make them some of the most important animals on the planet. So it's really important to know how climate change is affecting the one million+ species we not-so-lovingly refer to as "bugs." Scientists from Philipps-Universität Marburg, the University of Copenhagen and Imperial College London sought to do exactly that. Climate change involves many environmental shifts, but perhaps the most obvious is how it will affect global temperatures. It is predicted that global temperatures will increase somewhere between 2°F to 11.5°F by 2100, depending on the level of future greenhouse gas emissions. Such drastic increases in temperature are bound to have significant impacts on species that strongly rely on their environments to regulate body heat, like insects and reptiles. To look at how climate change may affect Europe's insect biodiversity, the team of researchers examined the distributions of 434 butterflies and 107 dragonflies. They also used imaging techniques to score the darkness or lightness of each species' wing color. What they discovered was that corals aren't the only species being bleached by climate change—it turns out Europe's insects are getting lighter on average in response to increasing temperatures.

Average lightness of dragonflies across Europe. Image from Zeuss et al. The distribution maps of both butterflies and dragonflies showed a clear pattern across Europe—lighter-colored insects dominate southern areas while darker ones prevail in the frigid north. But what the scientists really wanted to know was whether these distributions were in flux, so they compared their results for the dragonflies to ones over twenty years old. The dragonflies, they discovered, have already shifted—lighter species have increased in abundance and spread northward. Further research is needed to better evaluate exactly how insect distributions will change and to determine if these findings hold across the diversity of insect fauna, but already, these results have broad implications. “For two of the major groups of insects, we have now demonstrated a direct link between climate, insect color and habitat preference,” explained Carsten Rahbek, co-author of the study and the Director of the Center for Macroecology, Evolution and Climate at the University of Copenhagen and professor at Imperial College London. This link is not insignificant. It suggests that future climate change may have a dramatic impact on what species of insects end up where—or which ones survive at all. While we tend to think of things like body color as flexible (after all, we can change hair color in a matter of minutes), not all species can change their looks. Colors or patterns may play a pivotal role in predator avoidance or mate selection, meaning the cost of going light may be too high—but, so, too, may be the cost of staying dark. As temperatures increase, insects that stay dark will overheat in their current habitats. Thus darker colored insects with limited ranges may find their already small comfort zones disappear as temperatures steadily tick upwards. Others will be forced into cooler weather refuges, up mountainsides or towards the poles. If we want to conserve insect species, these results suggest that we can't just look at how insects are currently distributed—we have to think about how those distributions might be forced to change. Data such as these are a much-needed reminder that our daily activities affect all life on Earth, even in the littlest of ways. While the change in the distribution of insects (or even the loss of a few thousand species) might not seem like a serious concern given their massive numbers and ubiquitous presence, consider this: insects provide an estimated $57 billion in ecosystem services in the United States alone, from pollinating crops to pest control. Even small changes in the presence or absence of different species may ripple outward and affect the composition of entire ecosystems. So often conservation efforts focus on the large and rare—the tigers or pandas of the world, or as my fish-focused PhD advisor would say, the coelacanths. But ultimately, those species aren't the ones that we will miss the most. We'll miss the bugs. The survival of the humble bumble bee or the innocuous ant play a pivotal role in defining our natural world as this Earth's climate changes. Ultimately, the color change in butterfly wings will have a bigger impact on Earth's biodiversity than all the polar bears in the world.