Whistling While They Work: Cooperative Laguna Dolphins Have A Unique Accent 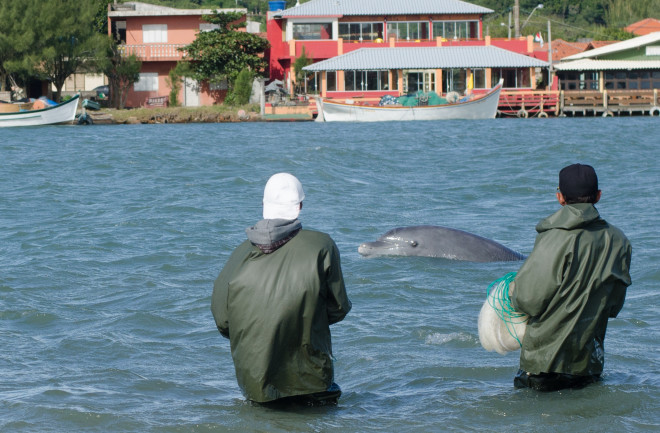 Fishermen working with a cooperative dolphin to enhance their catch. Photo Credit: Carolina Stratico When the mullet migrate northward, the fishermen in Laguna, Brazil are waiting. They rise early and take their places in line, waist-deep in the water, tarrafa—a kind of circular throwing net—in hand. Without a word, the dolphins arrive, herding schools of mullet towards the fisher line. The fishers say that the dolphins are an essential part of their fishing; they wait to fish until their marine helpers to arrive, in some cases standing for an hour or more, calling to the animals: "let's work". The fishers work as a unit, trading out their spots in line as the dolphins fill their nets. But while the humans are united, the dolphin community is divided. Only some of the population cooperate with fishers in this manner. Scientists discovered that the ones that work with people form their own cohesive social network, separate from the other dolphins in the area. "The cooperative fishery appears to have influenced the structuring of this bottlenose dolphin population into social communities," explain Bianca Romeu and her colleagues at Brazil's Universidade Federal de Santa Catarina in a new paper this month in the journal Ethology. Their latest work reveals the depth of this rift: the cooperative dolphins don't just behave differently, they communicate differently, too. Bottlenose dolphins (Tursiops truncatus) around the world exhibit learned, local foraging behaviors. Ones near Savannah, Georgia beg for scraps from shrimp trawlers, while some in Shark Bay, Australia don sponges on their rostrums to protect themselves while feeding along the bottom. These unique behaviors tend to coincide with social splits. In our species, isolated groups often create local slang and other identifying language elements, so perhaps it's not that surprising that dolphin cliques may exhibit similar linguistic variations. Yet, no one had looked at the acoustic behaviors of Laguna's dolphins. By examining thousands of whistles statistically, the team looked for differences between the dolphins that coordinate with fishers and those that don't. They found that whistle types varied in part by foraging tactic, illustrating "how social sounds can differ between subsets of individuals within the same population" and suggesting "that dolphins may use slightly different whistles according to the behavioural context." But whistles were also distinct between the social units— ascending whistles were more frequent in non-cooperative dolphins and concave, multiple and flat whistles more frequent in cooperative ones. The cooperative dolphins also emit shorter, higher frequency whistles with more inflection points. "We show that whistle repertoires may be mapped onto [their] social structure, as dolphins from different social communities tend to whistle differently." https://www.youtube.com/watch?v=qBy0SL5mS6w Other cetacean communities with explicit social structures have shown similar communicational differences. Specific sounds help killer and sperm whales navigate the complex social relationships of their matrilineal societies, for example. But it's unclear why the dolphins that hunt with the artisanal fishers have this distinct dolphin accent. "Our attempts to infer causes of the acoustic distinction and function of these social sounds remain speculative at the moment," the authors say. Differences in whistles between populations of dolphins has been described before in geographically-separated groups. But these dolphins share the same habitats, so it's unlikely that any environmental factors have led to this divergence. It's possible the acoustic differences are specific to coordinating the cooperative dolphins' unique hunting strategy, but the authors posit another possibility: "that whistles may either help individuals to associate with or recognize those who execute the same foraging tactics." This is especially likely given that the cooperative dolphins continue to whistle differently even when they're not working with the fishers. Given the overall importance of language to intelligent, social animals, one can't help but wonder if this slight divergence is the beginning of something much bigger. Killer whale species, which hunt different prey, are distinguished in part by acoustic differences. Unfortunately, we can't turn back the hands of time to see if foraging specialization and subsequent vocal distinction eventually kept populations from interbreeding, leading to reproductive isolation and, eventually, speciation. Perhaps with evolutionary hindsight— of thousands of years from now—our descendants will point to shift in dialect as the first essential step that led the cooperative dolphins down a divergent evolutionary path.