As ancient remains are uncovered and dated, archeologists expand their search for the evolutionary birthplace of Homo sapiens, and debate whether such a place exists. 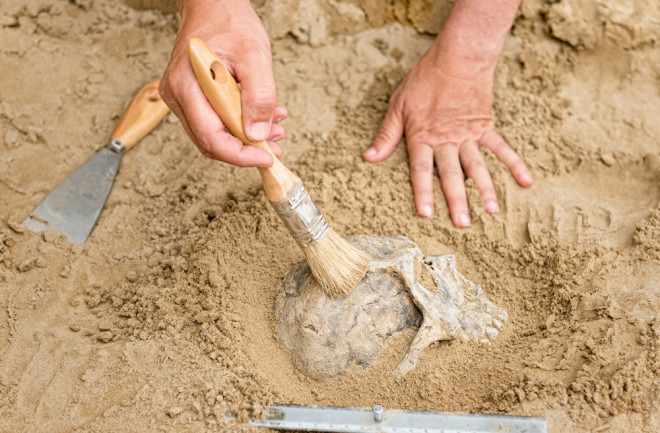 The answer to the great question — “where did our species come from?” — has long been Africa.

It was from somewhere in the African continent, most scientists believe, that modern humans evolved around 200,000 years ago before spreading across the world and becoming the dominant species we are today.

Finding the evidence is challenging as remains of the oldest Homo sapiens — our distant ancestors that are believed to have split off from Neanderthals some 500,000 years ago — are scarce. Most have been found in Eastern Africa.

In 2003 a skull dug up near a village in Eastern Ethiopia was dated back to some 160,000 years ago. Its anatomical features — a relatively large brain, thin-walled skull and flat forehead — made it the oldest modern human ever discovered. Two years later, its title was stolen by a pair of partial skulls discovered in Omo-Kibish, another Ethiopian dig site. The Omo-Kibish finds pushed back the story of modern humans another 35,000 years and was more evidence pointing to Eastern Africa as the cradle of humankind.

The abundance of evidence there led anthropologists, geneticists and paleontologists to believe it was where modern humans began their journey. But multiple discoveries in recent years challenge this notion.

In 2017, paleontologist Jean-Jacques Hublin made a discovery that reframed the story of humankind.

Since the 1980s, Hublin had studied peculiar fossils found in a cave in a desolate, mountainous region of Morocco in far-north Africa. The remains showed flat faces that looked remarkably like us — more so than our Neanderthal cousins. Their enlarged lower jaws and teeth along with elongated brain cases suggested they were of a primitive species that lived some 150,000 – 200,000 years ago. This age did not fit the pattern of previous discoveries, or the prevailing visions of how our story began.

As the oldest find at Omo-Kibosh was in Eastern Africa, where modern humans were believed to have began, it did not make sense for another human from the same time period to be dug up on another side of the continent.

So, when tests in 2017 dated Hublin’s discoveries in Morocco to 300,000 years ago, the paleontologist was left stunned. “It was a big wow,” he says. “I expected something older than 200,000, or I had hoped for something older, but not that old. It led us to completely reconsider the [story] of the evolution of our species.”

It is believed the human species split off from their oldest living ancestors, apes, around 6 million years ago to form H. sapiens. Modern humans then split from Neanderthals around 300,000 to 600,000 years ago. And 40,000 years ago, we began spreading from Africa to the rest of the globe. But the true origin of modern humans is bitterly contentious.

Pinpointing the place from which we steadily evolved into the strange, upright, over-sized brain creatures we are today would help explain not only how we became the world’s dominant animal, but also the lone surviving variant of our species.

In 2019 a group of researchers led by Vanessa Hayes, a geneticist at the Garvan Institute of Medical Research and the University of Sydney in Australia, came up with an answer.

The group studied linguistics, computer simulations of previous climates and modern mitochondrial DNA (mtDNA). They examined DNA from 200 living people of different groups and compared it to mtDNA in databases from more than 1,000 other Africans, mostly from southern Africa.

They discovered that the oldest mtDNA lineage found today is in speakers of Khoisan, a language used by foragers and hunter-gatherers in Namibia and South Africa. As the lineage is found only in living people in southern Africa, the study concluded that they are the ancestral population of all living humans.

Our ancestral homeland was traced back to a region south of the Zambezi River in northern Botswana, once a luscious, green area bordering enormous lakes. The study finally answered one of the eternal questions — Where do we come from? — and made headlines around the world.

Its conclusion, however, has not been warmly accepted by experts in the field.

“It's sort of like looking at modern populations and saying ‘here they are in this place today, they have the oldest genetic lineages, therefore that must be the site of origin of modern humans," says Sarah Tiskoff, a human evolutionary genomicist at the University of Pennsylvania. “But we don't know where those people’s ancestors were. So, 50,000 years ago, were they somewhere else?”

Tiskoff and some of her peers point to successive waves of human migration throughout history, such as the Bantu expansion, which suggest the answer is not so simple. They also question the use of mtDNA to map our lineage as it offers a limited picture of ancestry.

“Because it's inherited only maternally, it always coalesces to a single place,” says Bence Viola, a paleoanthropologist at the University of Toronto. “You will always get a single place in mitochondrial DNA, even if there's no such thing in reality.”

Recent studies have cast doubt on the very premise that modern humans have a single origin.

Growing evidence of interbreeding between human species suggests there was a patchwork evolution across different groups and regions. Rather than a clear tree of linear progress, modern humans evolved in a messy circle weaving in a myriad of directions.

“There was no single group ... there were all different groups in different areas,” Viola says. “There were likely more populations in the south of Africa, in the east of Africa, and probably also in the west of Africa. But we don't have any fossils from there, because the climate is just not good for preserving fossils. ”

In 2018 genetic analysis of a female affectionately named Denny who lived 90,000 years ago revealed she was half Neanderthal and half Denisovan — another archaic human species believed to have gone extinct around 40,000 years ago. Denny became the first hybrid of two different archaic humans discovered. Neanderthal genes have also been found in European, Asian, and Australasian people today.

“What we’ve found out is whenever these different human groups met, they interbred because they tended to recognize each other as potential mating partners,” Viola says. The sharing of positive genes across different species may explain the success of H. sapiens. It could extend to other developments like social behaviors and technology, too.

The type of stone tools found with the remains at Hubin’s site in Morocco have been found with other fossils originating from similar periods in Kenya and South Africa. Artifacts like beads from around 70,000 years ago have been recovered across Africa.

The ubiquity of these human-made items was either a coincidence caused by independent development in different groups that led to the same result, or they were spread from one group to another. The latter is Hubin’s preferred conclusion.

Hard evidence connecting the Morocco specimens to those in Ethiopia has not been found. But “absence of evidence is not evidence of absence,” Hubin says. To find the missing link, researchers must change their approach.

Some geographies and climates are particularly degrading for fossils, making evidence more difficult to find in certain places. This has skewed scientific investigations and produced misleading results, Hubin says. Research has centered on areas where fossils are more likely to be found, thus driving a self-fulfilling prophecy.

To move forward, science needs to cast a wider net and continue exploring other regions, even if results are less likely there, Hubin and other multiregional origin advocates contend. As so many pieces of the modern human puzzle are missing, the next one could bring a huge advance in understanding how modern humans evolved across Africa.

“There's only so much you can do with modern data alone. It's certain there will be a breakthrough if they're ever able to get older, ancient DNA from Africa,” Tiskoff says. “It's going to be one of these rare findings in a cave, or there's going to be some conditions that preserve the archaeological or fossil data, that might give us a clue.”