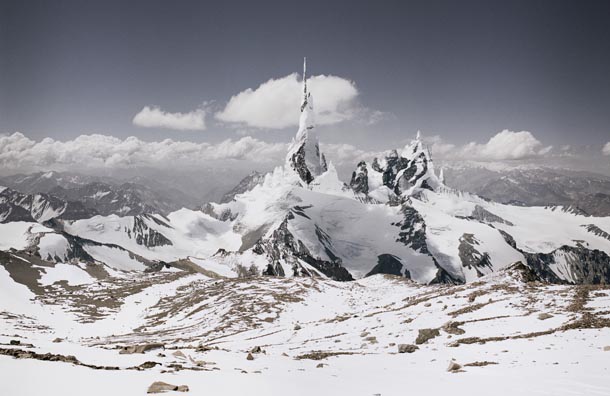 Using photographs made on a three-week trek to the summit of Argentina’s Mount Aconcagua German photographer Michael Najjar created a series of visualizations titled High Altitude tracking the global stock market indices over several decades. The crags and peaks of the Andes were digitally manipulated to create a landscape tracing the ups and downs of market data from 1980 through 2009. The re-mapping of the mountaintops in the shape of the boom and bust cycle merges immoveable fact---dense geological mass recording deep time, and the temporal, shifting abstractions of commerce. What we see are are mountains literally made in the shape of information---and for a moment, the mountains move and a rift occurs. Najjar writes:

"The information society has brought about a tectonic shift in our understanding of space and time. Humankind is confronted with a process of such dynamic complexity that the borderlines we seemingly identify at one moment are already sublimated in the next. In future the virtual value system could demand its proper reincarnation in the real world. The jagged rock formations of High Altitude are emblematic of the thin edge separating reality and simulation."