Did humans evolve to sing and dance, or did we invent our musical pastimes? Scientists are still debating the origin of this universal behavior. 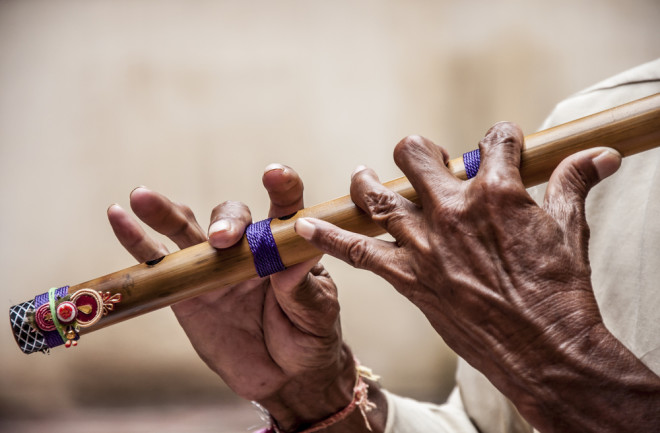 Look anywhere and you’ll find music. Without a single exception, every culture produces some form of it. Like language, it’s a universal trait in our species, and over the millennia it has bloomed into a diverse and stunning global symphony. Yet its origin remains one of the great secrets of human history.

The oldest known instruments are 42,000-year-old bone flutes discovered in caves in Germany. Vocal music surely predates these, but the problem, according to University of Amsterdam musicologist Henkjan Honing, “is that music doesn’t fossilize and our brains don’t fossilize.” With little hard evidence, scientists still debate what evolutionary purpose music serves. And because its purpose is obscure enough to warrant debate, some skeptics question whether it serves any purpose at all.

Charles Darwin thought it did. In music, he found evidence for his lesser-known theory of sexual selection. Drawing a comparison with birdsong — which is partially a courtship tactic — he proposed in his 1871 book The Descent of Man that although our melodiousness doesn’t help us survive from day to day, it could have evolved “for the sake of charming the opposite sex.”

This view of music as a primitive love song is less fashionable today. (Though, as Keio University musicologist Patrick Savage jokes, it may find a compelling “poster child” in Jimi Hendrix and his many romantic liaisons.) But an array of new ideas has taken its place as psychologists, cognitive scientists, anthropologists and others continue to confront the mystery of music.

In the latter argument, the rhythms, melodies and harmonies we cherish are no more than frivolous luxuries — “auditory cheesecake,” as evolutionary psychologist Steven Pinker memorably put it in his 1997 book How the Mind Works. Rather than a biological adaptation in its own right, music is a coincidentally pleasing byproduct of other adaptations, like language. “As far as biological cause and effect are concerned, music is useless,” Pinker wrote. “Music could vanish from our species and the rest of our lifestyle would be virtually unchanged.”

Some found this verdict too dismissive. After all, the capacity to make and enjoy music seems ingrained in each of us, just like other valuable adaptations. These days music is a profession, but even “ordinary mortals who never had a music lesson have implicit knowledge of the structure of the music of their culture,” says Sandra Trehub, a psychologist at the University of Toronto. They may not know an arpeggio from an interval, but they can keep a beat, copy a pitch and move their bodies to sound.

Trehub studies music perception in infants. “They’re quite captivated by music,” she says, and their aptitude for distinguishing differences in pitch and timing is, in many ways, similar to adults. They can even remember melodies months after hearing them. “You see these amazing abilities,” she says, “and you have to think … there is a biological foundation for it.”

That doesn’t necessarily mean we evolved that foundation for music, specifically, but many scientists have offered explanations for why we might have. Some argue music is a mechanism for social bonding, helping us to coexist in cohesive, well-functioning groups. For millions of years our primate relatives have engaged in a form of bonding known as social grooming, where they clean each other’s bodies and release endorphins in the process. But in bigger, more complex human cultures, grooming wasn’t enough. Collective singing and dancing (as well as laughter, to a lesser extent) can serve the same purpose on a far larger scale.

Another possibility is that music sprang from the soothing sounds parents make to communicate with infants. If prehistoric lullabies improved parent-infant bonds and offspring survival, there could have been an evolutionary incentive for the caregiver’s cooing.

Some researchers even argue that the earliest version of music — whatever it entailed — may have given rise to language itself (Darwin also believed this). Others think that music and language share a common ancestor. In University of Reading archaeologist Steven Mithen’s book The Singing Neanderthals, this ancestor is an ancient communication system bearing the onomatopoeic acronym “Hmmmmm” (Holistic, manipulative, multi-modal, musical and mimetic). Steven Brown, a neuroscientist at McMaster University, dubs it “musilanguage.”

Some have sought a way around the adaptation-invention dichotomy, a debate musicologist Savage believes has “outlived its usefulness.” He and others distinguish between music (a cultural product) and musicality (the biological underpinnings that allow us to create and perceive music). This alone doesn’t explain the ultimate origin of music, but it does allow room for both nature and nurture.

In August, in an effort to reconcile many previous theories, Savage and a group of cross-disciplinary co-authors published a paper presenting what they deem “the most comprehensive theory to date.” (Savage admits it may even be “too broad.”) They suggest that cultural music and biological musicality have developed in tandem, in a kind of “gene-culture evolution.”

Their idea builds on the work of Aniruddh Patel, a cognitive neuroscientist at Tufts University, who contends that music was initially an invention, but that it proved so useful in social bonding that it kicked off an evolutionary feedback loop. Natural selection began to favor this newfound musicality, a human creation, in the same way that it favored adaptations for digesting cooked food after early humans mastered fire.

Savage and his colleagues also take a broader view of social bonding, encompassing many ways in which we build and maintain relationships with our fellow humans. Music can act as a social glue, they agree, but it’s also helpful in pacifying crying babies and courting mates, among other things. To pigeonhole this versatile behavior, they argue in the paper, is a bit like claiming that vision evolved only for spotting predators, or only for avoiding obstacles, when it’s clearly “more a cognitive toolkit than a single tool.”

Music may unite humans generally, but it has yet to do so for those who study it. Savage’s article was one of two papers on music published in that edition of Behavioral and Brain Sciences. The other, whose lead author is Harvard University psychologist Samuel Mehr, “differs substantially,” as he and his colleagues write. They maintain that “music has deep evolutionary roots,” reaching back to our primate ancestors.

Honing, of the University of Amsterdam, shares this view. “I still believe in Darwin,” he says. “I still believe that we might share some of these [musical traits] with animals, and that they have a long evolutionary history.” By considering the components of musicality we have in common with other creatures, from whales to gibbons — The Evolving Animal Orchestra, as he titled a recent book — he hopes to learn more about music’s development in humans.

“It’s a strategy of saying something in the here and now about our evolutionary past by looking at other species,” Honing says. The obvious candidates are primates — which may have evolved from the same musical beginnings as us — and birds, which are an example of convergent evolution: a species that is not closely related to us, but that for some reason achieved similar musicality. The analogy feels especially fitting since the debut of Snowball the cockatoo, the internet’s favorite feathered dancer. And if Ronan the sea lion’s grooving is any indication, music may be more widespread in the animal kingdom. (These two, in Honing’s opinion, are “the ambassadors of our field at the moment.”)

Genetics, both animal and human, is another promising avenue for research, he says. Of course, we shouldn’t hold our breath for a “music gene.” Cognitive traits — whether language, musicality, memory or visual processing — are polygenic, meaning they involve a complex interplay of many genes. But maybe further analysis will reveal something like the FOXP2 gene, which has been linked with language. That said, experts are wary of overpromising on a musical theory of everything: “I don’t think anyone is ever going to be able to wrap it up in a nice, tiny bundle,” Trehub says. “It’s a complex topic.”

For musicologists, this is certainly true. For the average human, though, music can feel surprisingly simple. The paleoanthropologist Iain Morley, in his book The Prehistory of Music, quotes a Chinook man named Willy Selam: “You see in your mind’s eye the power in everything, even in a blade of grass. That’s why people become singers,” he says. “The world is too beautiful for even our language to describe.”