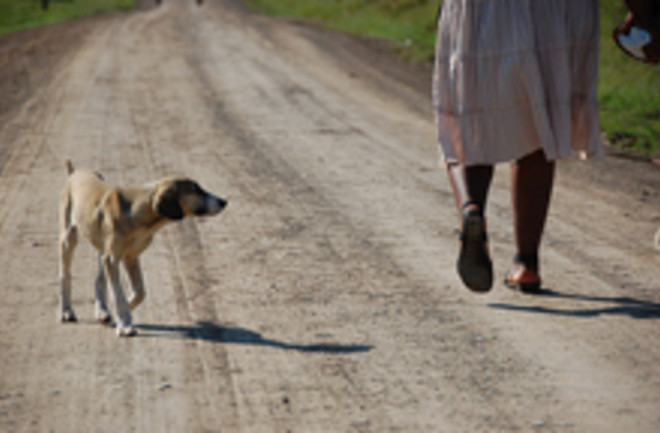 Scientists trying to determine where dogs were first domesticated have been sent back to the drawing board by a new study. Back in 2002, researchers sampled DNA from dogs around the world, and determined that dogs in East Asia had the most genetic diversity, suggesting that the species originated there and that dogs in that region have had the longest time to evolve. But the new study suggests that those earlier results were skewed, because DNA sampling of African street dogs has revealed equal genetic diversity. The earlier findings may have been thrown off because the large-scale study included both purebred dogs, whose evolution has been closely guided by human hands, and street dogs, who have bred more autonomously and randomly, and who therefore show more genetic diversity. But the 2002 researchers drew DNA from different types of dogs in different regions. Says Adam Boyko, lead researcher of the new study:

"I think it means that the conclusion that was drawn before might have been premature. It's a consequence of having a lot of street dogs from East Asia that were sampled, compared to elsewhere" [BBC News].

The new findings don't cast doubt on the main premise of dog domestication: that dogs evolved from the gray wolves that were once common across Europe and Asia. Boyko notes that the study also

does not mean domestic dogs might have originated in Africa. "We know Africa cannot be where dogs were domesticated, because there are no gray wolves there," Boyko said. But the findings call into question the previous proof that dogs were first domesticated in East Asia [National Geographic News].

While the domestication could have occurred anywhere in Eurasia where wolves and humans coexisted, the researchers suggest the Middle East as one likely spot. The study, published in the Proceedings of the National Academy of Sciences, focused on the genetic diversity of

African village dogs ... because Adam Boyko's co-authors, his brother and sister-in-law, were travelling in Africa on honeymoon. They collected all the blood samples from the African dogs [BBC News].

To find the ultimate point of origin for domesticated dogs, the researchers hope to conduct genome-wide scans of stray dogs across the world. Related Content: 80beats: Revealed: The Genetic Secret of the Dachshund’s Stubby Legs 80beats: Wolves Have Dogs to Thank for Their Dark Fur 80beats: Will Dog Cloning Become Mainstream as the Price Drops? 80beats: Hairless Dogs Give Up the Genetic Secret of Their Bald Glory DISCOVER: The Genetics of… Dogs DISCOVER: Ascent of the Dog