It's been 780,000 years since this happened — and some scientists say that Earth's magnetic poles are long overdue for a switch. 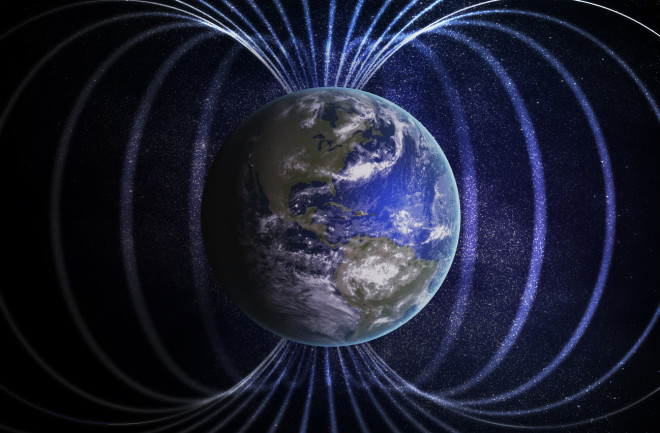 Something odd is happening to Earth’s magnetic field. Over the last 200 years, it’s been slowly weakening and shifting its magnetic north pole (where a compass points, not to be confused with the geographic north pole) from the Canadian Arctic toward Siberia. In recent decades, however, that slow shift south has quickened — reaching speeds upwards of 30 miles per year. Could we be on the brink of a geomagnetic reversal, in which the magnetic north and south poles swap places?

Earth’s magnetic field is generated by the convection of molten iron in the planet’s core, around 1,800 miles beneath our feet. This superheated liquid generates electric currents that in turn produce electromagnetic fields. While the processes that drive pole reversal are comparatively less understood, computer simulations of planetary dynamics show that the reversals arise spontaneously. This is supported by observation of the Sun’s magnetic field, which reverses approximately every 11 years.

Our own magnetic field came into existence at least 4 billion years ago, and Earth’s magnetic poles have reversed many times since then. Over the last 2.6 million years alone, the magnetic field switched ten times — and, because the most recent occurred a whopping 780,000 years ago, some scientists believe we are overdue for another. But reversals are not predictable and are certainly not periodic.

Researchers map out the ancient history of Earth’s magnetic field using volcanic rocks.  When lava cools, the iron that it contains is magnetized in the direction of the magnetic field. By examining these rocks and using radiometric dating techniques, it’s possible to reconstruct the past behavior of the planet’s magnetism as it strengthened, weakened or changed polarity.

To track more recent magnetic changes, scientists turn to the magnetic properties of archaeological artifacts. When our ancestors heated an ancient hearth or kiln containing iron to high enough temperatures, it would realign its magnetism with Earth’s magnetic field upon cooling. The point at which this occurs is known as the Curie point. Studies have even included some floor segments of an Iron Age building in Jerusalem, which a Babylonian army burnt down in 586 B.C.

But carrying out measurements on these archeological artifacts is difficult. For one, the magnetism in ancient objects is very weak — not enough to move a compass needle. And if any objects were heated and cooled several times, several magnetic patterns will be superimposed. Lastly, their reliability is dependent on the objects remaining in the same location that the heating took place.

Despite these difficulties, researchers have largely mapped modern changes in the magnetic field beneath western Europe and the Middle East.

Turtles and Salmon and Whales, Oh My!

Scientists can’t be sure of the exact repercussions that a reversal will have — the evidence from previous reversals remains unclear — but they may be serious. For instance, many animals use the Earth’s magnetic field for navigation during migration.

Juvenile loggerhead turtles dig their way out of underground nests on the beaches of Florida, enter the sea and travel far into the Atlantic Ocean (sometimes completely traversing it). Then, after many years, they return to the same Florida beaches on which they were born. They navigate this featureless, 9,000-mile journey by detecting the strength and direction of the magnetic field. When it comes to the salmon, whales, birds and other creatures that also use Earth’s magnetism to navigate, their lives would be seriously disrupted by a reversal of the magnetic field.

Additionally, Earth is constantly bombarded with a stream of charged particles arriving from the Sun and cosmic rays, mostly protons and atomic nuclei, from deep space. In the period leading up to a reversal, the magnetic field becomes weaker and significantly less effective at shielding us from those particles. While some geologists note that mass extinctions seem to correlate with these time periods, humans or our ancestors have been on Earth for several million years. During that time there have been many reversals, and there is no obvious correlation with human development.

The direct effect on mankind could be only slight, but not so for technology. We use artificial satellites for navigation, television broadcasting, weather forecasting, environmental monitoring and communication of all kinds. Without the protection of a magnetic field, these satellites could be seriously disrupted by solar wind or cosmic rays colliding with electronic circuits. A weak magnetic field in the South Atlantic Ocean, known as the “South Atlantic Anomaly,” already adversely affects satellites and could be an indication of what is to come.

Recent geological studies have suggested a possible reason for the anomaly. It is widely believed that our moon was formed when Earth was struck by the planet Theia 4.5 billion years ago, but the remains of Theia have never been found. It now appears that the remains of Theia may lie beneath our feet.

There are two huge volumes of rock buried deep in the Earth, each one millions of times larger than Mount Everest (and expanding) and denser and hotter than the rest of Earth’s mantle. Scientists suggest that these rock masses are the missing remains of Theia and that they interfere with the convection of molten iron — giving rise to the weak magnetic field in the South Atlantic.

Regardless, the seriousness of a magnetic reversal will depend on how long the reversal takes to complete. If it slowly shifts for many thousands of years, it is possible that migratory creatures, and mankind as well, will be able to adapt. In the meantime, we have much to learn about what is happening deep within our planet.